Why Jackie Kennedy Married JFK, According to New Details from Her Early Life 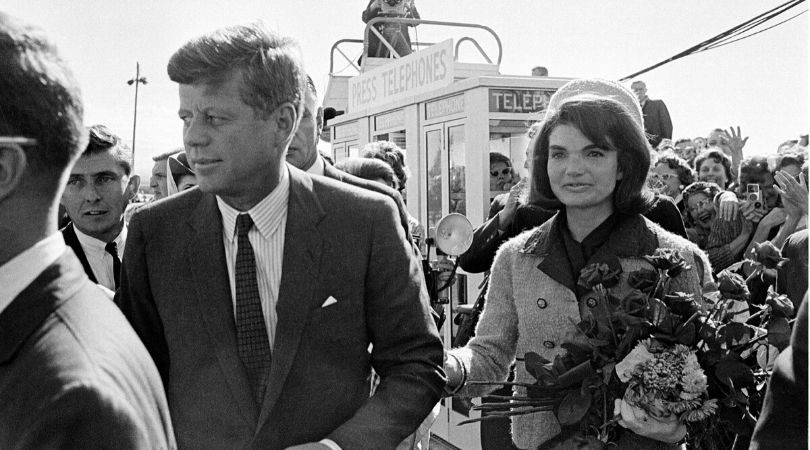 New light is being shined on American sweetheart, Jacqueline Kennedy Onassis, after J. Randy Taraborrelli released a new book, Jackie, Janet & Lee: The Secret Lives of Janet Auchincloss and Her Daughters, revealing new details about the sisters’ complicated life and relationships. The duo struggled under the influence of their mother, Janet Auchincloss. One of the greatest mysteries Taraborelli focused on was Jackie’s marriage to John F. ?Jack? Kennedy, despite the fact she had already been engaged to stockbroker, John Husted, Jr.

After her mother found out Husted was making $17,000 a year in 1950 ($159,000 in today?s money), she told her daughter to leave him. In Auchincloss?s eyes, the secret to a marriage and a lasting ?happily ever after? was ultimate power and money. Taraborelli reveals a compelling theory that involves Jackie?s mother, the sisters, and money.

In the summer of 1960, Jacqueline was pictured wearing this beautiful floral summer dress. Jackie posed for pictures with daughter Caroline & with members of the local women’s club 💗 . #nancyreagan #jackiekennedy #firstladies #fashion #1960s

Janet Norton Lee was 21 when she married Jackie?s father, John Vernou ?Black Jack? Bouvier III. She was 33 when she divorced him after his philandering, leaving both girls to struggle financially before Janet remarried two-year later. She married Hugh Auchincloss, a wealthy Standard Oil heir, focusing on the lives of her daughter by never having to struggle financially. Hence, the whole money and power scheme, installing that money mattered with it came to men.

According to Taraborrelli, he believes Jackie could have not been with Jack if it wasn?t for his money and name. In a letter from Jackie to a confidante after her split, she wrote how she knew that Husted was the one, feeling the happiest she ever has. Their marriage was set for June, but in March, Jackie returned the ring at their engagement party per her mother?s request after she was astonished to learn how much Huston was making.

According to the JFK Library and Museum, Jackie met John F. Kennedy while she was working as the ?Inquiring Camera Girl? for the Washington Times-Herald newspaper. She started the job in the fall of 1951 and in June 1953, Jack Kennedy proposed to Jackie while in London, covering Queen Elizabeth II’s coronation. The two married in September 1953. Being the wife of the 35th President of the United States, she became the First Lady of the United States from 1961 until President Kennedy’s assassination in 1963 in Dallas, Texas. The couple had four children, two of whom died in infancy.

In 1968, she married Aristotle Onassis, one of the world’s? richest men and a wealthy Greek shipping magnate. The couple married on Onassis?s private island of Skorpios on October 20, 1968. Many believe this marriage brought her comfort knowing her children would have a normal life. Aristotle, also known as Ari, was 23 years Jackie?s senior and at the time of their wedding, Jackie was 39 and he was 62.

According to speculations, the Kennedy clan despised Ari, and Robert ?Bobby? Kennedy even urged Jackie to break off the relationship. She later promised him she would put off the marriage talk until after the presidential election. Yet, moments before winning the California primary, Kennedy was assassinated, which made Jackie terrified. She believed Onassis would be able to provide the security and privacy Kennedy desired after being afraid of the “curse” that followed the Kennedy family.

So, could it be that Jackie married President John F. Kennedy due to her mother’s wishes? Well, ultimately that’s a question we might never have an answer to, but I will say that Jackie’s mother had a lot of influence on her daughters’ life choices. I mean, money and power were clearly present at the Kennedy?s household (or should I say white house).

Of course, this isn’t to say she didn?t love J.F.K. any less. The duo was clearly in love, and are considered one of the greatest ?couple goals? in history. For now, no matter how many authors speculate on the real meaning of their relationship, Jackie Kennedy’s true intentions remain one of the greatest mysteries in American pop culture.

This article was originally published on August 10, 2018.