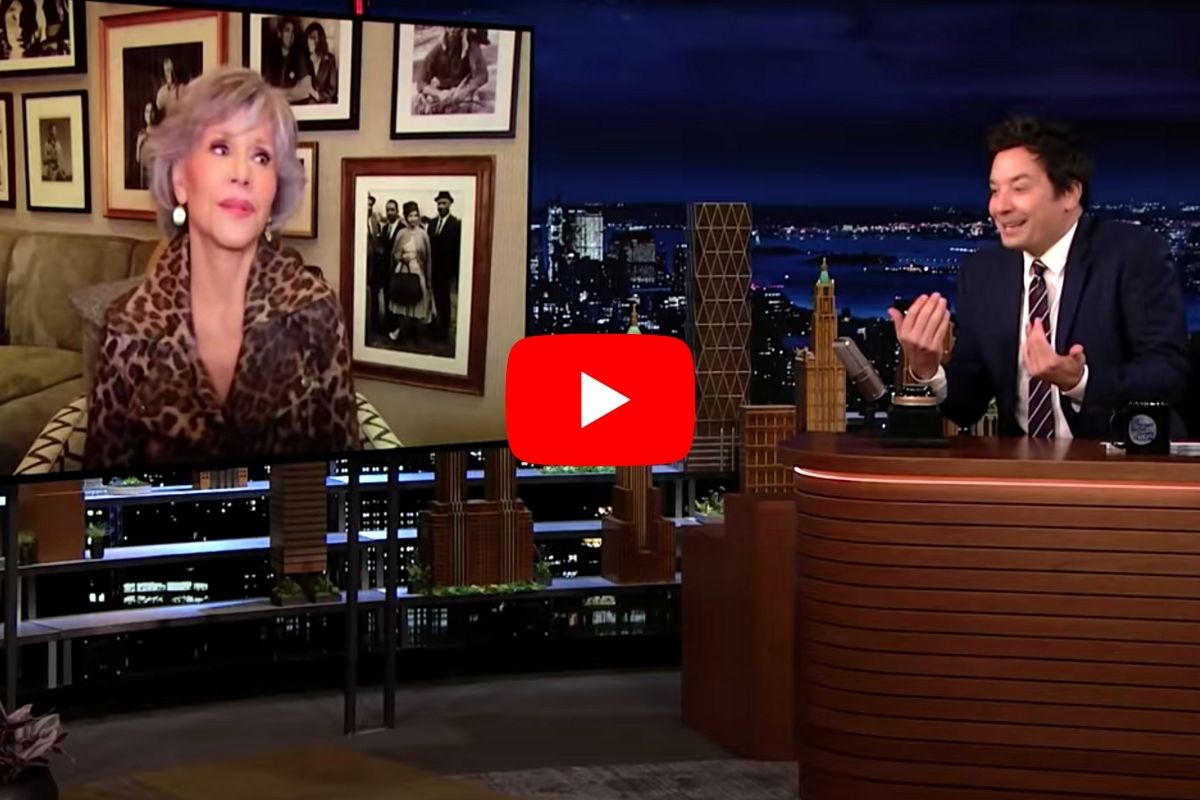 Last night Jane Fonda virtually joined The Tonight Show Starring Jimmy Fallon… and no part of the interview disappointed. Not only did Fonda talk at length about her impressive activism but she also wowed the audience with the story of her first kiss: a memory that’s romantic, steamy, and nostalgic all at once. I mean, did you really think the Hollywood it-girl didn’t grow up locking lips in the moonlight with handsome actors? This is Jane Fonda!

When the 83-year-old Jane Fonda appeared, via webcam, with Jimmy Fallon she looked fantastic as always, in leopard lapels and a silvery bob. (Check out her Golden Globes fashion here.) And it turns out that glamorous image has had a key impact on her long career as an environmental and social activist. In 1970, Fonda said she wanted to quit acting entirely to devote herself to organizing full-time; she realized that her celebrity status kept her apart from fellow activists. But then her friend and mentor (and the future mayor of Detroit) Ken Cockrel pointed out — as Fonda so theatrically put it on The Tonight Show — “Fonda, listen to me. The movement has plenty of organizers. We don’t have movie stars. you not only have to stay with your profession, you have to be more intentional about how you do it.”

Now Fonda is using her elite status to push her latest climate initiative, Fire Drill Fridays. As Fonda explains, it’s easier to wield influence when you, say, have a hit TV series. In Fonda’s case, Netflix’s Grace and Frankie on which she stars with Lily Tomlin.

Additionally, the pair discussed the big news out of Minneapolis yesterday: Derek Chauvin’s guilty verdict. Reflecting on the death of George Floyd and our national turmoil, Fonda remarked:

“White people have to realize this isn’t a zero-sum game… When black people can access health care and housing and education and living wages, it doesn’t take away from us, from white people… Never was this more obvious than in the pandemic: when most of the frontline workers were people of color and they were denied the personal protective equipment… We’re all in this life together and we have to overcome racism.”

And a Hot Secret

When the Fonda was asked by Jimmy Kimmel about her best kiss, the Oscar-winner knew without hesitation. And surprisingly, the best time was also her first time! Fonda went into lush detail describing the night it all went down at summer stock in Hyannis Port, Maine. (Though I think she may have misspoken; Hyannis Port is technically in Massachusetts) Spending time at the theater there, Fonda fell for the stage manager James Franciscus — who would go on to star in the NBC TV show Mr. Novak. And the rest, you should absolutely hear about in Fonda’s own words:

“He walked me out to the end of a pier. And he kissed me. And the stars began to whirl and the pier began to shake and my knees gave way and I slid down to a pile at his feet. I’ve never had a kiss like that, ever since. It was like Hemingway, you know, in The Sun Also Rises: the earth shook.”

Their juicy conversation is now trending. Watch the full interview, above, to also hear about the time a bear broke into Jane Fonda’s bedroom. And below, learn more about the life and death of Fonda’s first love: James Franciscus.

Man, can Fonda tell a story.

Who Was James Franciscus?

Franciscus was an American actor who appeared in Mr. Novak, The Naked City, The Investigators, Longstreet, Doc Elliot, and Hunter. He died in 1991 at the age of 57.

When Jane Fonda kissed Craig T. Nelson on-screen for Grace and Frankie, it was her first scripted kiss in fifteen years. At the age of 77, Fonda had thought her days of cinema romance were done… until the Netflix show became such a surprise hit. On kissing Nelson though, she reported, disappointedly: “No tongue.”