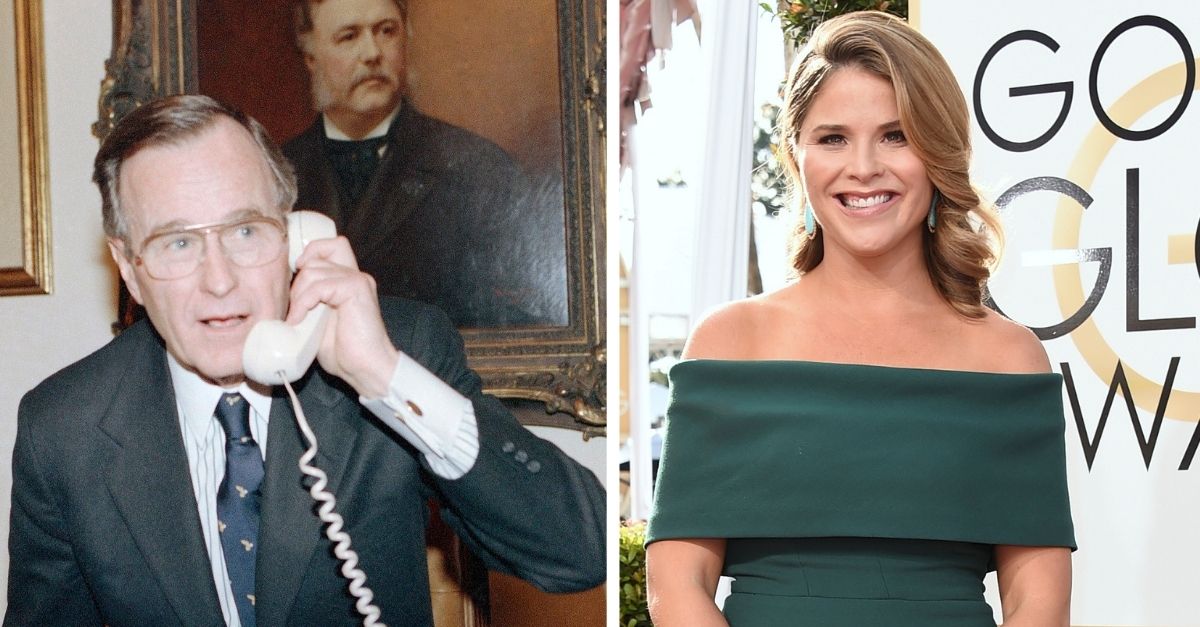 Most people remember George H.W. Bush as the 41st president of the United States. But to his grandchildren, especially to Jenna Bush Hager, they will forever remember him as their beloved Gampy. In her new book, Everything Beautiful In Its Time, the former first daughter highlighted some of her favorite moments of the former president, including the last words he told her twin sister, Barbara Bush, on her wedding day. Barbara married screenwriter Craig Coyne on October 7, 2018, at the Busch Family Estate in Kennebunkport, Maine.

Their Grandfather, former President George H.W. Bush, was in a wheelchair after suffering from Parkinson’s disease. At 94-years-old, Bush was still grieving the death of his wife, 73-year-old former lady Barbara Bush, who died that April. But, it didn’t stop the family nor him from celebrating on that beautiful day.

The Texas native wrote, “We ate a big dinner at the same table where we’d had countless meals in the years before. Gampy sat in between Barbara and me. The last words he ever spoke to her were, ‘You have never been more beautiful.'” President Bush died a month later on November 30, 2018. Still grieving the death of her beloved grandparents, Jenna wrote Everything Beautiful In Its Time: Seasons of Love and Loss as a tribute to them. Her book is a collection of intimate personal essay’s recalling some of the most unforgettable stories and precious moments that she had with her parents, former first lady Laura Bush and former President George W. Bush, and her grandparents. She also wrote about the special connection she has with her sisters.

The Today Show co-host, who goes live with Hoda Kotb, also spoke about her “own imperfections’ as a wife and a mother. Bush Hager shares 4-year-old Poppy Louise and 7-year-old Margaret “Mila” Laura with her husband Henry Hager. Their third child, Henry “Hal” Harold, was born in August 2019. During a recent segment of The Today Show, Bush Hager discussed her book, explaining why she chose that title. She stated that the title came from a Bible passage that she read at her maternal grandmother’s (Jenna Welch) funeral last year. She noted, “It says that everything is beautiful in its time. And I think even grief is beautiful in some ways, because it means you loved the people enough to miss them and to care.”

The former first daughter, who is also a children’s book author, also revealed one thing she picked up from her “Ganny” and “Gampy,” which was writing letters. Apparently when the family wasn’t together the couple would send them heartwarming letters and longhand emails telling them to stay safe and make good choices.

Gampy, you were so down-to-earth — it was among your greatest attributes. I’ll never forget the night you were babysitting us and getting ready to debate Michael Dukakis. Remember when Barbara was upset over losing her stuffed animal, Spikey? Instead of debate prepping, you organized a search party with the Secret Service to find it. It’s funny to think about now, but it’s a moment that will stick with me forever. You may have been a vice president and president, but you were a Gampy to your little pip-squeaks first and foremost. Even with such a demand-ing job, you knew the importance of family. You were happiest when those you loved were around.

We can’t wait to read all the timeless lessons George H. W. Bush taught the Bush’s. You can buy the hardcover of Everything Beautiful in Its Time on Amazon. Book club just got a little bit better.