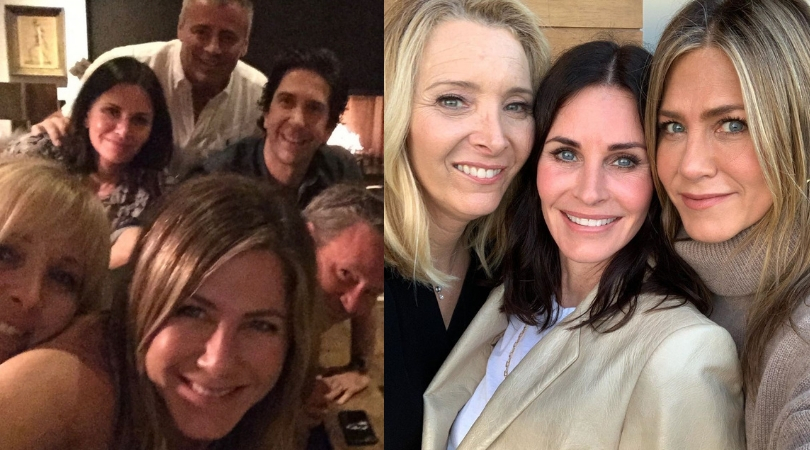 Jennifer Aniston had some help from her FRIENDS co-stars and has officially made her Instagram debut! Safe to say the co-stars will always be there for her, even on her first day on Instagram. The actress joined the social media platform with a special reunion photo of her former co-stars Lisa Kudrow, Courteney Cox, Matthew Perry, David Schwimmer, and Matt LeBlanc. The popular sitcom recently celebrated its 25th anniversary by showing special screenings in select movie theaters of 12 of the most iconic episodes along with exclusive interviews and never before seen content.

The actress, who portrayed Rachel Greene, caption the selfie, “And now we’re Instagram FRIENDS too. HI INSTAGRAM.” Safe to say both Instagram and Twitter went wild as Aniston’s name trended worldwide. Instagram even managed to break down after everyone immediately rushed to follow the Hollywood actress, causing the page to temporarily crashed shortly after she shared the first post.

Luckily, it was quickly back up and running after several users experience difficulty following her new account, and were being redirected to the “follow” button after clicking it the first time. Others were shown a page reading, “Sorry this page isn’t available.” Meaning yes, pretty much everyone in the world was trying to follow Aniston because, well, can you blame them?

The 50-year old bombshell reached more than 524,000 Instagram followers in less than an hour and had followed dozens of celebs such as David Spade, Pharrell, Adam Sandler, Charlize Theron, Julia Roberts, and ex-husband Justin Theroux. Her Instagram account comes after Aniston hinted at the possibility of a Friends reunion in June. Cox also joined Instagram this year in January and has since been teasing fans with several Friends themed content, sharing photos with Kudrow, Ellen DeGeneres and of her on the famous orange couch from the famous Central Park hangout spot.

Aniston is preparing for the launch of her new apple TV show, The Morning Show, which she appears opposite of Steve Carell and Reese Witherspoon. According to Apple’s official synopsis, The Morning Show explores the “cutthroat world of morning news and the lives of the people who help America wake up in the morning.”

The story is told through the lens of “two complicated women” who work to navigate the minefield of high-octane jobs while facing crisis in both their professional and personal lives.