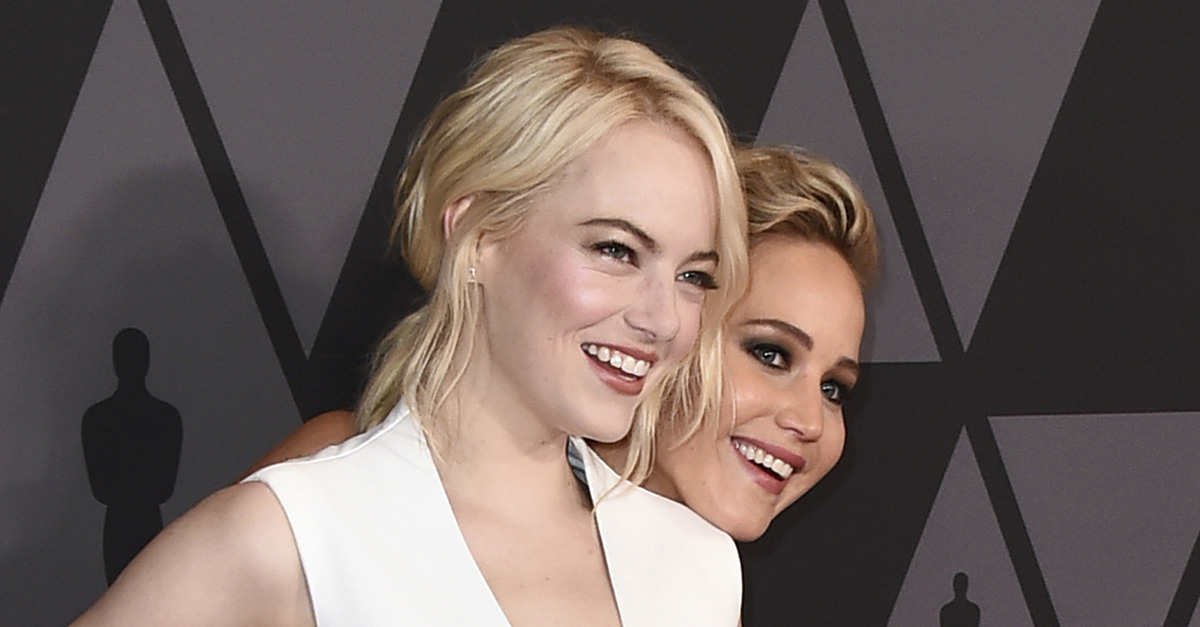 While most of Hollywood rocked their darkest threads to hit the Golden Globes and its after-parties, one A-list darling was noticeably missing.

And according to Jennifer Lawrence, 27, it’s all Emma Stone’s fault.

Lawrence apparently planned to check out a few post-award parties with with famous friend, until the latter changed up their plans at the last minute.

The Oscar winner shared a clip on her Facebook page putting the blame for her absence on Stone. Lawrence explained to Stone — who was behind the camera and attended the awards shows as a nominee for her tennis flick “Battle of the Sexes” — and fans alike that she was halfway out the door with her makeup nearly finished and a car on the way until she got a call.

“You just wanted to come over to my house,” she continues before turning her head to reveal only one smokey eye, “so I sent my hair and makeup team home and now this is what I look like.”

The funny moment is the latest proof confirming that the duo are extremely close and also comical.

In an interview with W Magazine, Lawrence and Stone opened up about how their friendship blossomed after finding out they had a mystery person in common.

?We both had the same stalker. His name was John the Orchestra Guy. He would ?accidentally? text us,? Lawrence said.

RELATED: ?I turn into a huge a*****e?: one of America?s favorite actresses has a method for repelling fans in public

?He wasn?t really a stalker,? said Stone. ?He was this guy who had a lot of people?s numbers. He must?ve worked at a studio or as an agent?s assistant or something. He texted me and said, ?Hey, Alex,? making up a name. ?I?m running late on my way to the sound stage. Can you warm up the orchestra for me? Make sure the orchestra?s warmed up for me.? It was always about the orchestra. ?Can you text me back and let me know you get this? John.”

After Woody Harrelson gave Stone?s number to Lawrence. They texted back and forth for about a year before actually meeting in person, but at first they both feared they’d be running into “John.”

Obviously, the leading ladies had nothing to worry about and their friendship remains one of the most fun in Hollywood today.