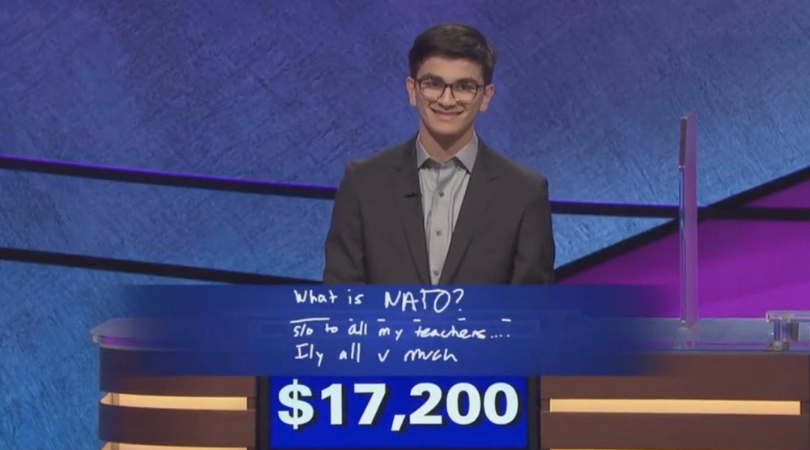 A Jeopardy! contestant is giving back to a great cause! Avi Gupta was the champ of the teen Jeopardy! tournament earlier this year and has decided to donate over $10,000 of his winning cash prize to cancer research. The 18-year-old won the game shows $100,000 grand prize. Now, he is a freshman beginning his studies at Columbia University.

On Monday of this week, Gupta cut a $10,314 check to the Oregon Health and Science University’s Knight Cancer Institute. The “$314” at the end of his donation is a nod to the ratio of a circle’s circumference to its diameter, more simply known as “pi”. In his words, it represents a “lifelong love of learning and math and science”.

This #PancreaticCancerAwarenessMonth, join us in the fight to #EndCancer. Working with Alex on @Jeopardy was an honor, and I hope the #Jeopardy community will join me in honoring him. #InspiredBy https://t.co/ZOloI3vzwO

His donation will help a cause close to his heart- early detection of pancreatic cancer. He did so in the name of the game show host, Alex Trebek, who has diagnosed with stage 4 Pancreatic cancer in march of this year. Gupta stated, “This is in honor of Jeopardy! host Alex Trebek, a man who’s been a role model for me my whole life… I hope it makes a difference.”

The show’s host of almost 40 years has undergone chemotherapy treatments, earlier this year and more recently in September of this year. He has entertained and inspired viewers for decades on his show. So much so that Gupta actually isn’t the first winning contestant to donation money in Alex Trebek’s name.

Contestant James Holzhauer offered his support in the fight against pancreatic cancer as well. After he won over $2,462,216 after competing in thirty-two straight games, Holzhauer also donated a portion of his winnings. He donated to the Naperville Pancreatic   Cancer Research Walk, which takes place in Naperville, Illinois.