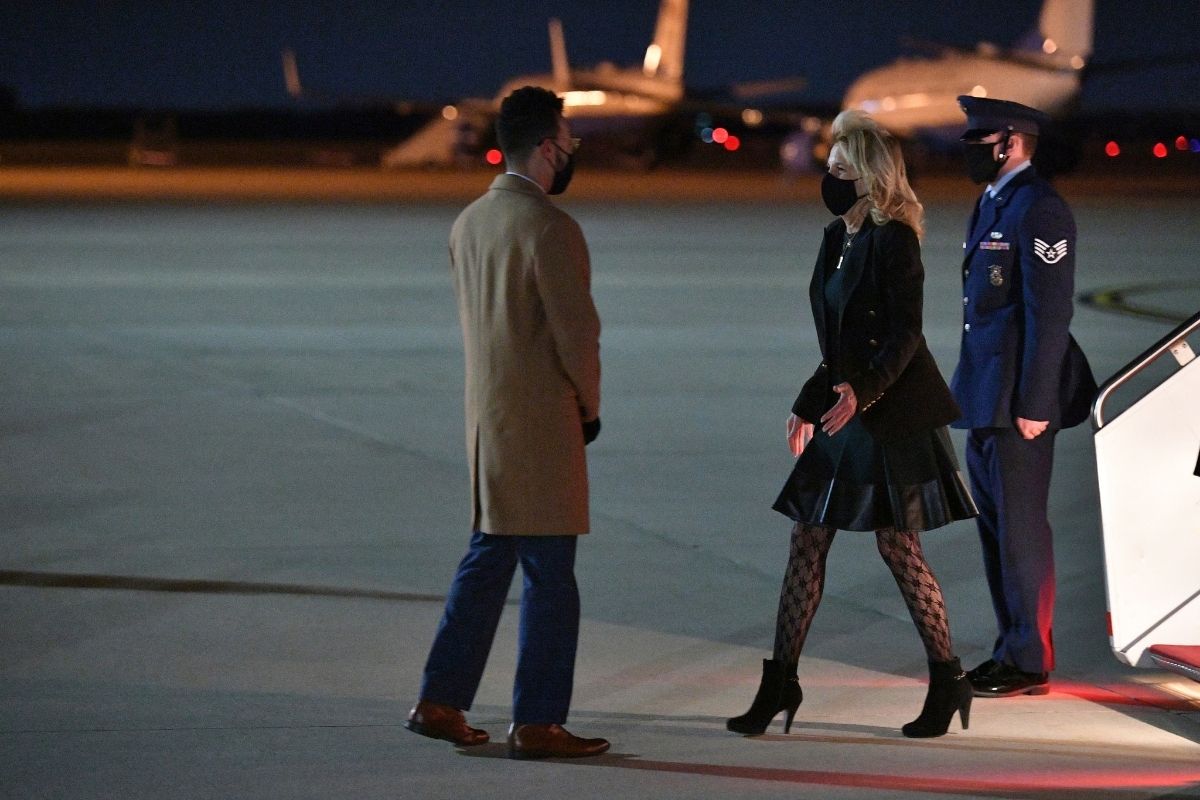 First Lady Jill Biden might not be known for her fashion the way that Michelle Obama and Melania Trump were. But that doesn’t mean she can’t make a statement. Last Thursday, Dr. Jill Biden departed Air Force One wearing black floral fishnet tights… and incited conservative fury.

reminds me of when she was second lady jill biden once stuffed herself into an overhead compartment for a prank https://t.co/mcVlv1Zywq pic.twitter.com/u63E3JtCV9

Though it might come as a surprise, the First Lady is a prankster. Last Thursday, in honor of April Fool’s Day, Jill Biden disguised herself as a flight attendant aboard Executive One — wig and all — and passed out Dove ice cream bars to passengers. Another in-flight prank? While the FLOTUS’ husband Joe Biden was still vice president, she once hid inside of an overhead bin. But Biden’s silly stunt was not the boldest thing to hit the tarmac last week.

When stepping off the plane at Andrews Air Force Base in Maryland, Biden wore a pleated leather skirt, a tight black blazer, and patterned black fishnets paired with heeled booties. Personally, I don’t see what’s so shocking about the textured choice of tights — though the gothic stockings certainly hit their peak via 2011. They’re a comfortable option that can add some layered flair to any ensemble — especially in monochrome black.

So why is everyone talking still talking about it? Throughout Easter weekend, social media was flooded with opinions over Biden’s outfit. Even now, pics of the striking fashion choice are still trending. Many Republicans have mocked the (modestly) edgy look, complaining that the 69-year-old should dress her age. But I don’t think there’s such a thing. Jill Biden’s fishnet stockings are fun! And as far as her age is concerned, she looks fantastic.

Since we’re living in the age of the internet, there was no way that Jill Biden wearing fishnets was not going to snowball into some politicized fashion fiasco. Check out some of the funnier reactions.

🟥 REPUBLICANS on JILL BIDEN: "This is how it starts, America! First she's wearing patterned hosiery that we call 'fishnet stockings' because we don't know what those are, next thing you know she's sending emails and trying to get healthcare for everybody" https://t.co/bZbYpbrmBx

And a video from The New York Post that includes Twitter users from both sides of the political spectrum.