With several TV hosting stints and movie roles under his belt, it’s fair to say that WWE superstar John Cena is more than just a wrestler. He’s a jack of all trades, and he’s got the bank account to prove it!

Well Cena added another feather to his cap on Wednesday evening’s edition of “The Tonight Show” when he participated in a game of Mad Libs with the show’s host, Jimmy Fallon.

Some of the questions and answers included:

Advice that you would give a shy teenager? “Stay golden, Ponyboy.”

What would you shout if you stubbed your toe? “Falafel!”

But wait, there’s more! Whereas most games of Mad Libs usually end with a reading of the disjointed story that you and your friends have just written, Fallon’s Mad Libs game end with him and his guest acting out the story and inserting the the Mad Lib words into the dialogue of the scene — with unsurprisingly hilarious results!

In the festive scene, the pair played brothers named Winston and Jimmy Bill Bob who sat by the tree as Cena’s character revealed he no longer believed in Santa Claus!

Earlier in the episode, Cena showed off his linguistic skills with a Mandarin message:

The episode also features a monologue cameo by Yamaneika Saunders, an interview with comedian Bridget Everett and a musical performance by Beck.

Cena’s latest project is an animated movie called “Ferdinand,” in which he voices the titular character, a giant but gentle bull who has to find a way to break free from his captors and return home to his family. The movie will be released on Dec. 15, 2017.

“It was a really fun time. I obviously believe in the movie,” Cena told Fallon about the film. “It’s a story about being proud of who you are, even if you’re different. Different is okay as long as you’re happy.”

“I call it a wonderful family film,” he added.

The last time Cena was on the “The Tonight Show” he played a game called “True Confessions” with “SNL” star Kate McKinnon.

“Kate and I are about to play a game of deception,” a rather dastardly sounding Fallon told the audience right as Cena started drinking from his paper prop coffee cup. “Don’t drink that! It’s a prop! This is supposed to be like a detectives’ office!” Fallon yelled. This made Cena spit out the unknown liquid, which he then jokingly claimed was “urine.”

The wrestler-turned-movie-star then was unsure about going first, but he bit the bullet and revealed his first — potentially false — confession: “I was once hit by a car while riding my bike, and the driver was my girlfriend.” Fallon and McKinnon then had 60 seconds to interrogate Cena and attempt to figure out whether he was lying or not.

“If this is a lie, this guy should win an Oscar,” Fallon claimed, convinced Cena was being truthful. Next it was Fallon’s turn, who confessed, “I made out with Gwyneth Paltrow during an ‘SNL’ sketch.”

Being one of the most popular current “SNL” stars, McKinnon had a lot of questions for Fallon and his claim. Her own confession was less raunchy, but still funny. 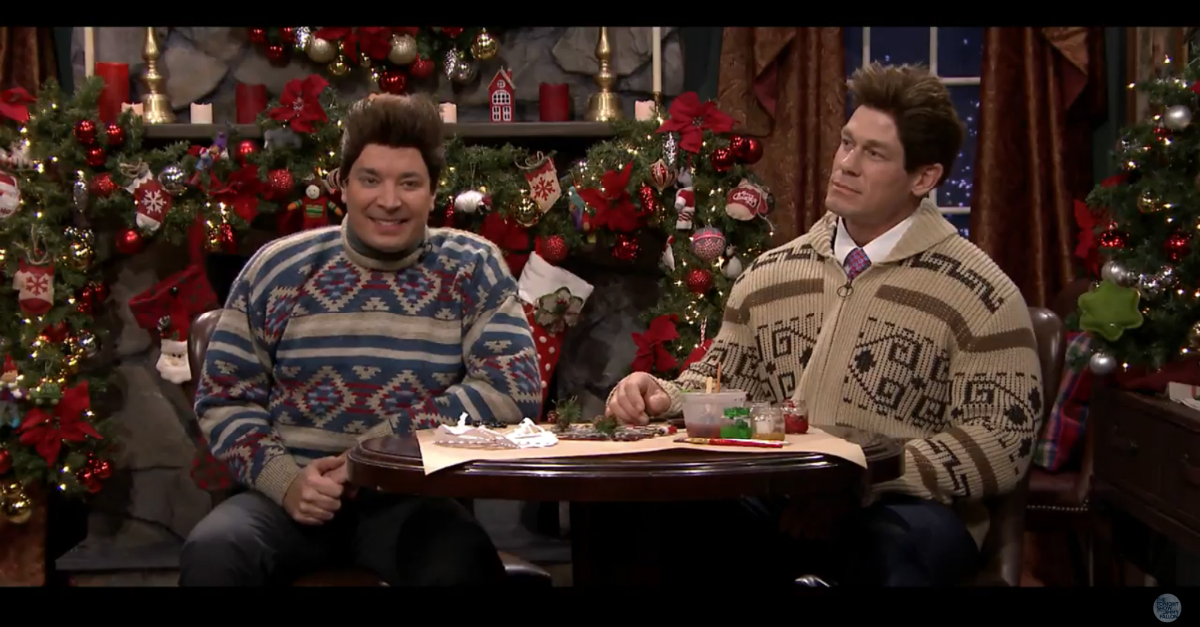