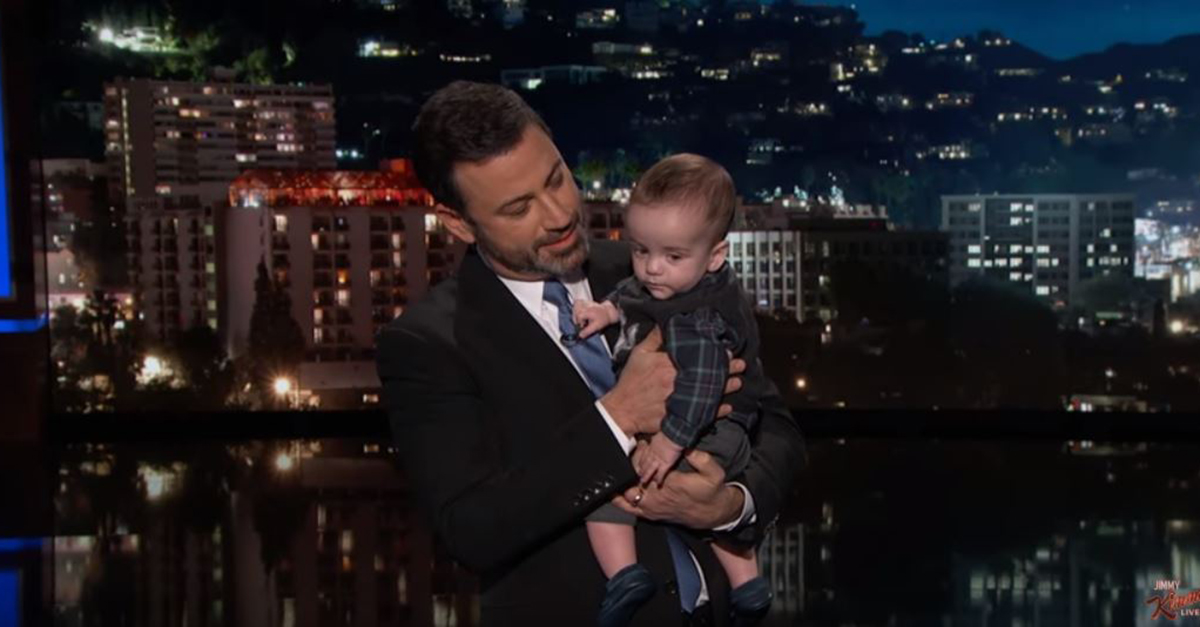 TV host Jimmy Kimmel introduced his infant son to his studio audience and viewers at home on Monday night. Kimmel was choked up talking about his son’s health and treatment.

“Hi, I’m Jimmy and this is Billy. I was out this week because this guy had heart surgery,” he introduced to the audience before thanking his guest hosts for filling in for him while he was out. When he got emotional thinking about his son’s health, Kimmel tried to laugh it off. “Daddy cries on TV but Billy doesn’t.”

“We want to thank the very bright and talented doctors and nurses at Children’s Hospital who treated Billy and many kids with so much care and compassion… children from every income level whose health is especially threatened right now because of something you probably never heard of,” he said, holding back tears. “It’s called CHIP [Children’s Health Insurance Program].”

CHIP helps families who make too much money to qualify for Medicaid but can’t get coverage through their jobs, according to Kimmel. He told the audience that CHIP may be cut off for some families because funding has not been approved by Congress.

“Parents of children with cancer, diabetes and heart problems are about to get letters saying their coverage could be cut off next month. Merry Christmas, right?” Kimmel continued. “This is literally a life and death program for American kids. It’s always had bipartisan support, but this year, they let the money for it expire while they work on getting tax cuts for their millionaire and billionaire donors.”

“I’ve had enough of this. I don’t know what could be more disgusting than a tax cut that mostly goes to rich people ahead of the lives of children,” Kimmel said before encouraging his audience to call their representatives to urge funding for CHIP.

“Billy’s doing great by the way. He has one more surgery,” Kimmel said. “They say he’s probably on track to win at least a Bronze medal in the Olympics in 2036.”

Billy was born with a heart defect in April and underwent his first surgery at three days old. Kimmel opened up about his son’s health just days after bringing him home for the first time.

“He will have another surgery in 3 to 6 months,? Kimmel said at the time. ?And, a third, hopefully non-invasive surgery in the future.?