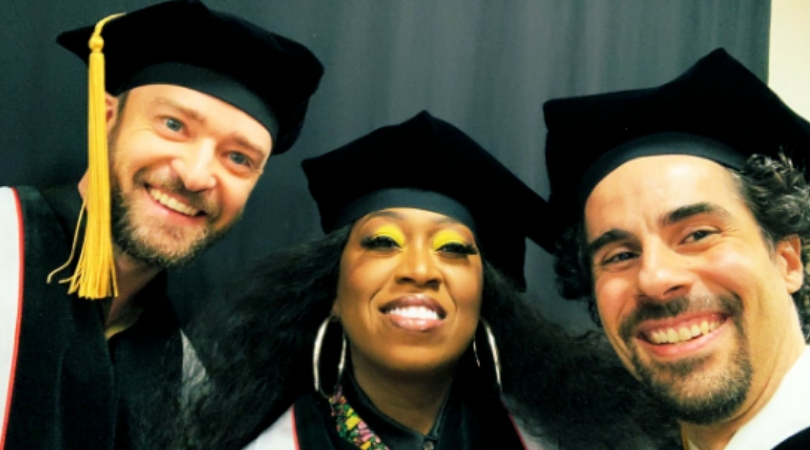 It looks like congratulations are in order for Justin Timberlake and Missy Elliott after they were honored with doctorate degrees from Berklee College of Music! Composer and musical director, Alex Lacamoire also receive an honorary degree for his work in several Broadway musicals such as Dear Evan Hansen, In the Heights, and Hamilton.

The school released a statement saying the honorees were given the doctorate as a recognition for their influences in music and achievements, and for their “enduring global impact.” All three celebrated their degrees through social media, thanking Berklee and their fans. Elliot took to Instagram to celebrate with a witty caption on her post, alongside a video of her in a cap and gown, saying, “create your own lane. Sincerely Dr. Missy Elliot.”

Elliot is the first hip-hop artist to receive the college’s honorary doctorate, sharing a touching message during her speech, urging the students not to give up. The singer has five Grammy awards and has been making waves for three decades as a rapper, singer, songwriter, and producer. In a few weeks, Elliot will also receive another honor and will become the first female rapper to be inducted into the Songwriter Hall of Fame.

During Timberlake’s address to the graduates, he shared several inspiring messages about working for success. The actor and singer noted that one is defined by what they define failure as.

No Dream is too big!!! Keep chasing!!! Trust me… I’m a DOCTOR!! 🤣👨‍🎓 But, for real… THANK YOU to @berkleecollege for this incredible honor—I’m very humbled and grateful.

“You’re defined by what you define failure as. It’s not a thing if it leads you to your success. It’s all part of the journey. I hope that in the years to come, two things will happen: one, I will represent you in the way that you most hope for,” he added. “And two, I look around and see this graduating class. Meet me at the studio. I want to see y’all!”

Timberlake is not only a singer and actor but is also a successful author. He is a 10 time Grammy Award-winning musician, and was previously recognized by TIME as “one of the 100 most influential people in the world” in both 2007 and 2013.

Lacamoire is a talented composer, musical director, and orchestrator with major Broadway shows behind him, “Dear Evan Hansen” being his most recent success. The composer has four Grammys and three Tony Awards. Lacmorire thanks Berklee through Twitter, saying he was over the moon with the degree, especially since it was by his alma mater. He graduated from Berklee College of Music in 1995.

Being honored in this way by my alma mater means the world to me, you guys.
I’m over the moon with joy and I’m psyched to be grouped with these legends!
See y’all in May https://t.co/5vPYiy3Pmj