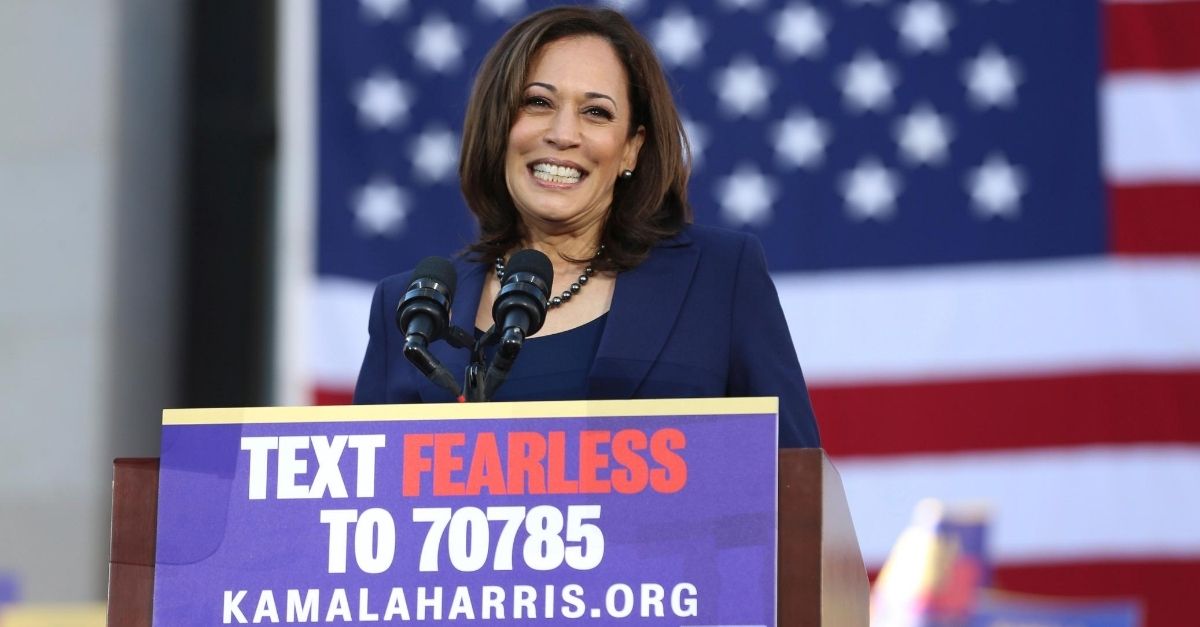 On August 11, 2020 Democratic presidential nominee Joe Biden officially announced that California’s Senator Kamala Harris will be his vice-presidential running mate for the 2020 presidential election. Harris, who is Biden’s former opponent in the race, will bolster the Democratic ticket with years of experience, making her the third woman in history to be nominated for vice president by a major political party. On January 21, 2021, she became the first Black woman and first Asian-American woman to be elected as Vice President of the United States.

Harris was born in Oakland California on October 20, 1964. Her mother, Shyamala Gopalan, was a breast cancer researcher from India, and her father Donald Harris immigrated to the United States from Jamaica working as an economics professor at Stanford University. Harris credits her parents for her influence on a professional trajectory and all her political earnings. She went on to earn her undergraduate degree from Howard University in 1986 and her law degree from the University of California, Hastings three years after that. She began a career in the Alameda County District Attorney’s office working as an Oakland Deputy district attorney from 1990 to 1998. During her time there, she garnered a reputation for being tough on these issues such as drug trafficking, gang violence, and sexual assault.

What You Need to Know About Kamala Harris

Fast forward to 2003, Harris became the district attorney of the City and County of San Francisco, six years later, and two terms later she was elected attorney general California margin of less than 1 percent. Her win made history as Harris became the first female and the first black person to hold the post. One of Harris? most notable moves as an attorney general was when she refused to defend Proposition 8, the 2008 California ballot measure that banned same-sex marriage in the state, later deemed unconstitutional in a federal court. In 2003, Harris officiated the first same-sex marriage in California after the federal appeal Court’s decision.

In November 2016 Harris defeated congresswoman Loretta Sanchez for a seat in the US Senate and became the second black woman and the first South Asian American ever to enter the legislative branch. She has been a part of the Chamber’s Homeland Security and Governmental Affairs Committee, Committee on the Judiciary, Committee on the Budget, and Select Committee on Intelligence. She has been known for her outspoken support of a single-payer healthcare system introducing legislation to increase outdoor recreation sites in urban areas to provide financial relief for those who are facing rising housing costs.

It's an honor to be your Vice President. pic.twitter.com/iM3BxJzz6E

In 2017, Harris made headlines while serving on the Judiciary Committee for her rapid-fire pointing questioning of event attorney general Jeff Sessions, and then once again in 2018 for taking aim at Supreme Court Justice nominee Brett Kavanaugh. Most recently in 2019, Harris published her memoir, ?The Truths We Hold: An American Journey,? later announcing she was running for the 2020 Democratic presidential nomination. After a few months, she dropped out of the race in September 2019 in which Biden said he would consider her as his running mate. Last December by then stated, “Senator Harris has the capacity to be anything she wants to be. She is solid. She can be president someday herself. She can be the vice president. She can go on to be a Supreme Court justice. She can be an attorney general. I mean, she has enormous capability.”

Announcing who he had picked to fight along with him, the former Vice President to Barack Obama took to social media stating, “I have the great honor to announce that I?ve picked @KamalaHarris ? a fearless fighter for the little guy, and one of the country?s finest public servants ? as my running mate.? To which Harris happily replied, “@JoeBiden can unify the American people because he’s spent his life fighting for us. And as president, he’ll build an America that lives up to our ideals. I’m honored to join him as our party’s nominee for Vice President, and do what it takes to make him our Commander-in-Chief.?

The general election is scheduled to be held on November 3, 2020. President Donald Trump, of the Republican Party, was elected back in 2016 and is seeking reelection to a second term. On April 8, former vice president Joe Biden became the presumptive nominee of the Democratic Party.

I’ve known Senator @KamalaHarris for a long time. She is more than prepared for the job. She’s spent her career defending our Constitution and fighting for folks who need a fair shake. This is a good day for our country. Now let’s go win this thing. pic.twitter.com/duJhFhWp6g