Steve Irwin’s Son Freaks Kevin Hart Out So Much with His Animals, It’s Bust-a-Gut Hilarious 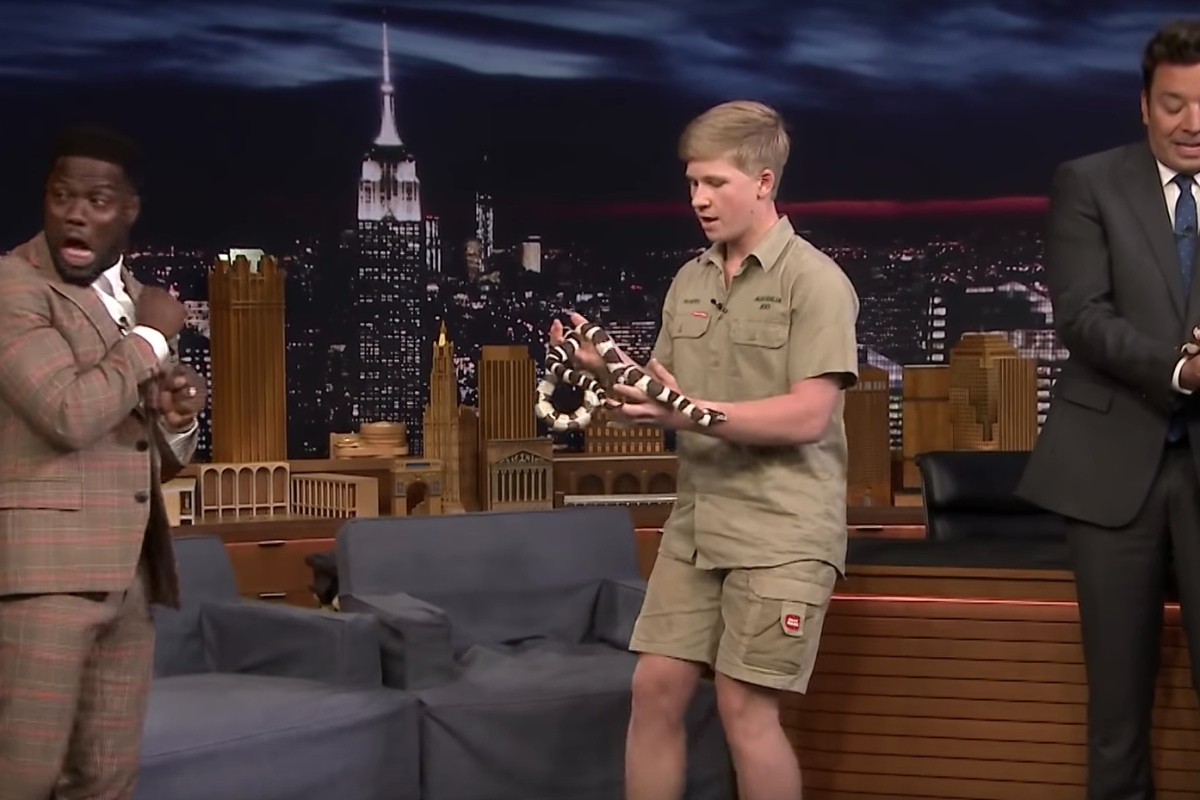 You didn’t ask for my opinion, but I’d like to share it anyways: people who try to conquer your fears for you are the worst. No matter how funny it is, I will never, ever want to skydive. Please, don’t ever consider pushing me. Comedian Kevin Hart and I share this sentiment, only he’s terrified of every single exotic animal that Steve Irwin’s son, Robert, brought on The Tonight Show Starring Jimmy Fallon. Even as Jimmy Fallon begs him to be cool with the animals, all Hart can say is, “I can’t, it’s not in me, I’m sorry. Basically, I’m not capable of processing what you’re saying right now.” And the video of it all is even better.

Robert Irwin, the 14-year-old animal expert son of crocodile hunter Steve and Terri Irwin, is carrying on his father’s legacy, just like his older sister Bindi Irwin, as host of “Robert’s Real Life Adventures” on Australia Zoo TV. He also co-hosts “Wild But True,” a show on the Discovery Kids Channel. He shares his father’s passion for bringing wildlife into the living rooms of viewers, educating them on the world around them. He also specializes in scaring the ever-lovin’ crap out of Kevin Hart and Jimmy Fallon. I won’t spoil it, and just let the video speak for itself.

So let’s cover that again. Hart is confronted with kingsnakes, a baby ostrich (Giselle), a tarantula (Big Red), and a falcon. He finally bucks up and handles the falcon, probably because there’s a glove between the talons and his arms. 14-year-old Robert Irwin must have tried so hard to hold it together during the show.

I think the best part is when Fallon confronts his own fear and holds the tarantula as Kevin Hart screams, “Oh!! Oooohh sh*t!! Oh my god!!!” loudly from stage right. He obviously didn’t make it better when he told Fallon, “That looks like it jumps, man.” Fallon barely holds it together, even turning his face away to not breathe on it. And when he finally gets it out of his hands, Fallon freaks out just as much as Hart, who is in actual tears from laughing. Finally, though, Hart bucks up and handles the falcon. In the process, he gives us this hilarious screenshot. Steve Irwin’s 14-year-old son, on the other hand, handles each animal like a professional. His precise descriptions of the wild animals sound just like his father, and it seems that sharing a passion for animals is the Irwin family way.

As for Hart’s fear, it’s a well-known fact that he’s afraid of animals; he even makes fun of himself during his stand-up routines.

Take this clip from his “I’m a Grown Little Man” DVD special. It starts off with his fear of gnats and gets better from there.

If even Hart couldn’t be convinced to handle the other animals, I think the late Steve Irwin would be awfully proud of his young son carrying on the family legacy on talk shows around the world. Will Robert one day reprise “The Crocodile Hunter”? You just never know, and we hope to see amazing things from the young nature conservationist who is already a natural in front of the camera.

So there you have it. Celebrities, they’re just like us! Even in Hollywood, you can find people who are terrified of snakes.

Editor’s note: This article was published on September 21, 2018.