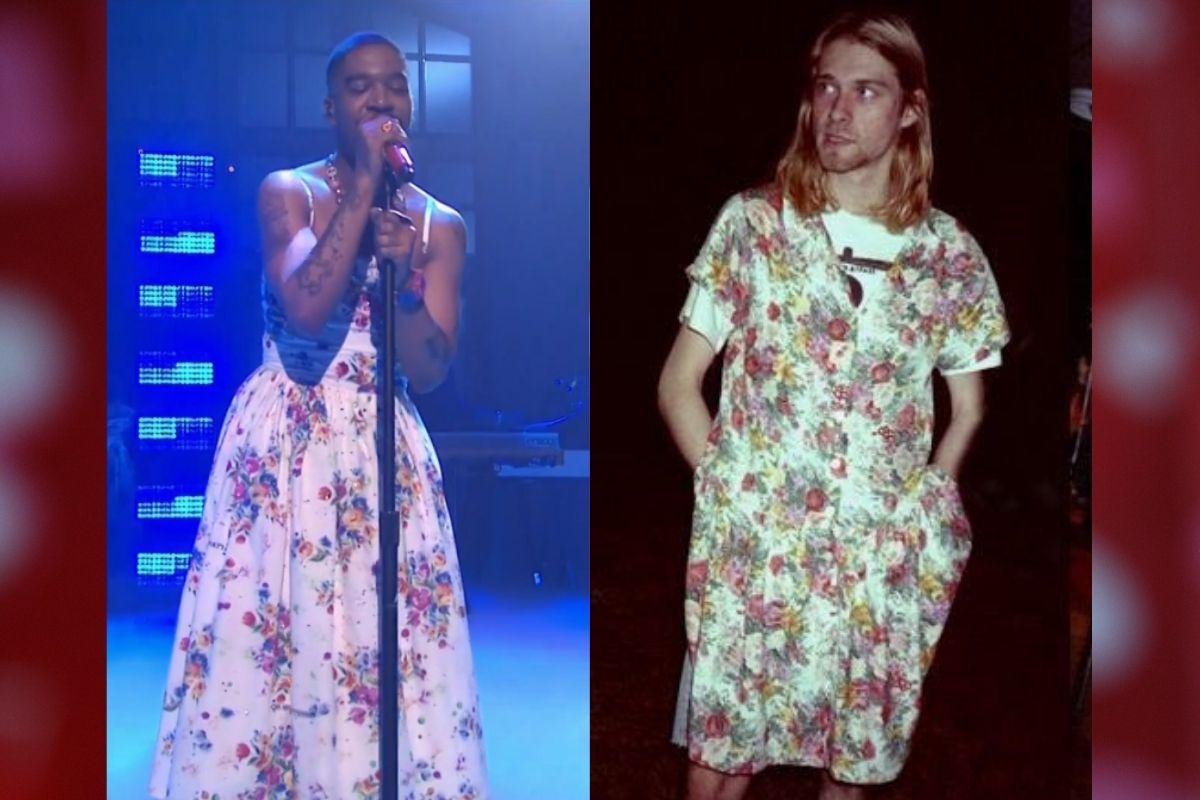 When Kid Cudi came out live in New York on Saturday night, the crowd was stunned by his midi-length floral dress. The pretty piece, designed by Off-White’s Virgil Abloh, was meant to honor Nirvana frontman Kurt Cobain on the 27th anniversary of Cobain’s death. In a 1989 live show, Cobain famously wore a similar garment: the moment was just one of his many feminine fashion statements. Of his gender-bending style, Cobain once said, “Wearing a dress shows I can be as feminine as I want. I’m a heterosexual… big deal, but if I was a homosexual, it wouldn’t matter, either.”

Kid Cudi has long identified Cobain as a major influence on his music. Singing “Sad People” off his latest album, last year’s Man on the Moon III: The Chosen, the lyrics made obvious reference to great artists like Cobain, gone too soon:

“In the dead of the night I have these dreams
What’ll happen to me? Will I burn out?”

In spaghetti-straps and subtle petticoats, the 37-year-old rapper certainly made the look his own, swaying against the microphone, surrounded by plumes of fog. And it didn’t take long for social media to go off, praising the unique SNL performance and searching for further tribute Easter eggs. In a tweet following Cudi’s performance, he shared that, overall, “I wanted to show love to Kurt…”

Virgil designed the dress for me. I told him I wanted to show love to Kurt w a floral print sundress and this man made a masterpiece. Thank You @virgilabloh ur a fuckin genius!! Love you man we did it!!!

That dress was not Kid Cudi’s only wardrobe tribute on Saturday night. When performing “Tequila Shots,” Cudi wore a sweater that seriously resembled the fuzzy green cardigan Kurt Cobain wore during his Nirvana’s MTV Unplugged live performance in 1993. To give you an idea of how much that item has figured into Nirvana’s legacy, the seemingly simple button-up sold for an unprecedented $334,000 at auction in 2019.

Beneath his own take on the green cardigan, Cudi wore a Chris Farley t-shirt as a nod to another beloved performer who once graced the SNL stage. (Check out Adam Sandler’s own Chris Farley tribute here.)

WATCH: Carey Mulligan, Pete Davidson, and other Cast Members on the Latest ‘SNL’