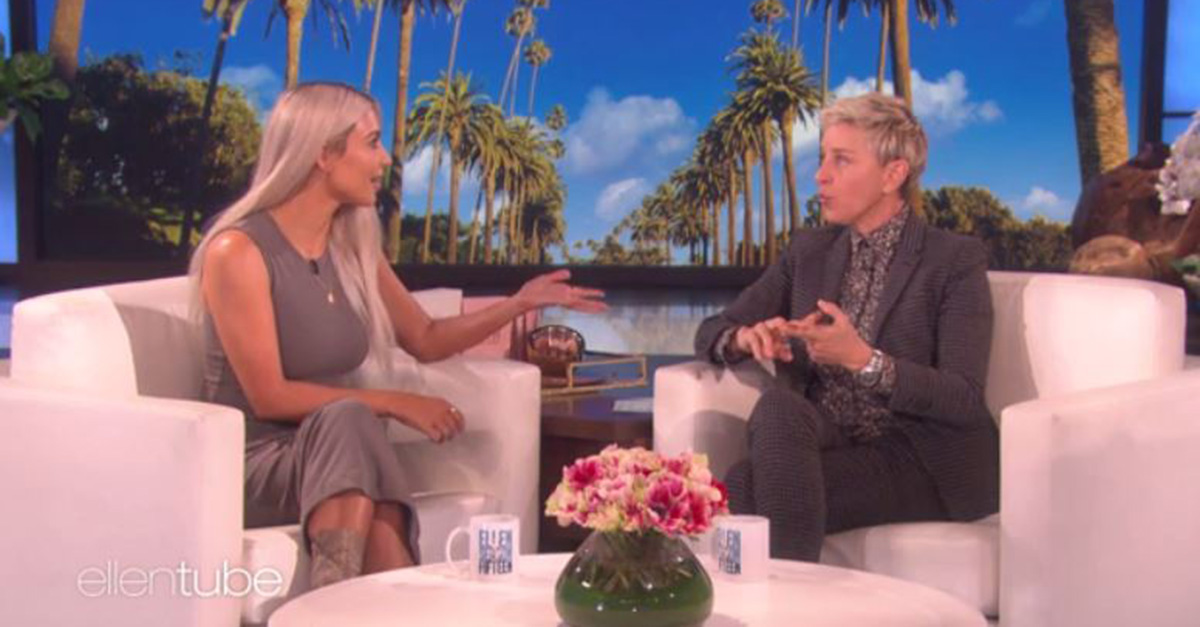 It’s another girl for Kim Kardashian West and Kanye West!

On Wednesday, Kardashian West appeared on “The Ellen DeGeneres Show” and confirmed — seemingly by accident — that her children are looking forward to welcoming their “baby sister.” Kardashian West and West are expecting their third child via surrogate sometime this winter.

She said that she briefly entertained the idea of having someone in a stork costume drop the baby off at the front door, since the whole surrogate thing is really confusing to her children.

“Yes, you are going to mess [Saint] up really bad,” DeGeneres joked. “Don’t do that.”

But it’s North West who is “tricky,” according to the reality mom. Kardashian West threw a lavish baby shower over the weekend to celebrate the new addition to the family, but it was daughter North West who enjoyed the gifts more than anyone else.

“So, people brought toys and gifts, and [North] was opening them all up the next day,? Kardashian West said. ?And she goes, ?Mom, since Baby Sister?s not here, I think I need all of her toys in my room and play with them and make sure they?re all OK for baby sister.’?

“She’s a toy tester, and you just told us it’s a girl!” DeGeneres said as the audience cheered.

She said her eldest daughter is “really excited” about having a baby sister. But the reality star and beauty mogul admitted that she and Kanye have not yet decided on a name for “baby sister.”

?We don’t have a name. At the baby shower, I was like, ?I just want everyone to write a name on a little tile and see if there is something that sticks,’? she said. ?We?re freaking out; we have no name.?

“And did anything stick?” DeGeneres said. When Kardashian West said they had not picked a name, DeGeneres offered her celebrity baby name generator to bring on some inspiration.

The generator came up with names like “Lip-Kit West,” “West West” and “Star West.”

“You know what is so funny, and I am not going to name her Star, but my daughter picks that name all the time,” Kardashian West admitted.

DeGeneres gave the generator one more spin, and it landed on “Pop West.”

“Not for me,” Kardashian West said. “I do like different names,” but she didn’t care for Pop being “short, easy to spell, one syllable.”

DeGeneres told Kardashian West that she actually named her son Saint when he was born. Kardashian West had no idea that the inspiration came from DeGeneres and her wife Portia de Rossi texting with Kanye West.

“We were giving him tons [of names]. It wasn’t Saint, it was an Australian name like Saint,” DeGeneres said. “And he wrote back, ‘Saint! That’s it!’ and we were like, ‘You’re welcome.'”

“Was it after he was born? Because I remember it was like four days after, and I was like, ‘OK, we are leaving the hospital, and we have to name the baby,'” Kardashian West said.

“It was before you gave birth, and we came up with Saint. And [Kanye] has never admitted it,” DeGeneres said. She then tried offering a name that riffed on the baby being the third child, like “Three West” or “Trey West,” but Kardashian West shot it down.

“You are so difficult!” exclaimed Ellen.