The last living head of state from WWII has been laid to rest, and Prince Charles was there to see it 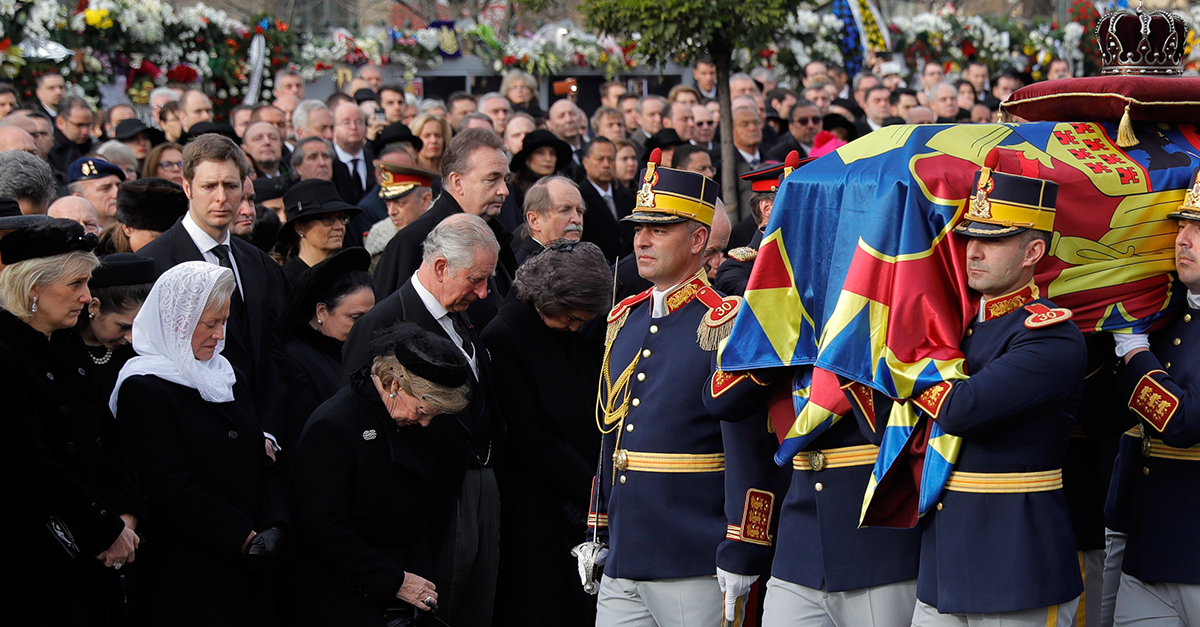 AP Photo/Vadim Ghirda
Honor guard soldiers carry the coffin of the late Romanian King Michael during the funeral ceremony outside the former royal palace in Bucharest, Romania, Saturday, Dec.16, 2017. Thousands waited in line to pay their respects to Former King Michael, who ruled Romania during WWII, and died on Dec. 5, 2017, aged 96, in Switzerland. (AP Photo/Vadim Ghirda)

BUCHAREST, Romania (AP) — Tens of thousands of Romanians joined European royals to pay their respects to King Michael, Romania’s last monarch and a ruler remembered for his dignity and morality, as he was given a state funeral Saturday.

Michael, who ruled Romania twice before being forced to abdicate by the communists in 1947, died at age 96 in Switzerland on Dec. 5.

Britain’s Prince Charles, Swedish King Carl XVI Gustaf and Queen Silvia, and Spain’s former King Juan Carlos and Queen Sofia, were among those at a pre-funeral service at the Royal Palace where Michael’s body had been laying in state for the past two days. The Swedish king saluted as Michael’s coffin was placed on a dais.

Other royals including Henri, the Grand Duke of Luxembourg, Princess Astrid and Prince Lorenz of Belgium were joined by Romanian President Klaus Iohannis for a sung funeral service, led by the head of the Romanian Orthodox Church, Patriarch Daniel.

Bishops wafted incense in the small cathedral where Michael was crowned for the second time on Sept. 6, 1940. Michael, who was a great-great grandson of Queen Victoria, first became king aged 5 after his father Carol II eloped with his mistress and abdicated.

Michael’s reign is best-remembered for the Aug. 23, 1944 coup he led to oust pro-Nazi leader Marshal Ion Antonescu, a move that took Romania into the war on the side of the Allies.

For this, the king was awarded made a Chief Commander of the Legion of Merit by U.S. President Harry S. Truman and was decorated with the Soviet Order of Victory by Joseph Stalin.

After his abdication, Michael spent decades in exile working as a chicken farmer and aircraft pilot, living in Britain and settling in Switzerland. He finally got his Romanian citizenship back in 1997, eight years after the collapse of communism.

The Hohenzollern-Sigmaringen dynasty that ruled Romania from 1866 until Michael’s reign ended in 1947 no longer enjoys special status, but its heirs enjoy a certain prestige and hand out honors. Successive Romanian governments have returned castles and other properties that were seized from the royal family when the communists came to power.

The funeral procession carrying the coffin of Romania’s last king drove slowly through the capital to a railway station, where, accompanied by a phalanx of priests, the casket was put on a royal train. It will arrive in the central town of Curtea de Arges for burial next to the grave of Michael’s wife, Anne de Bourbon-Parme, who died last year.

Ordinary Romanians crowded the streets to see the procession go by, while others threw flowers as the royal train bearing the coffin passed through railway stations on its way to burial in central Romania.

Mourner Georgeta Anastasiu, 60, said the late king had been “demonized by the communists, but in the end we found out the truth about him.”

She called the king “the last moral example for Romanians.”

Earlier, the crowd cheered and shouted “King Michael!” as the coffin, led by Orthodox priests and a guard of honor, was transported by an army jeep toward the cathedral.

Michael’s five daughters and his estranged grandson Nicholas Medforth-Mills, who was stripped of his title for allegedly fathering a child out of wedlock, walked behind the coffin.

Journalist Vlad Mixich summed up the mood on social media.

Today Romania is burying what it could have been. Today is the funeral of a dream. #KingMichael #Romania #funeral pic.twitter.com/S0C9dTUdRl

“Today Romania is burying what it could have been; today is the funeral of a dream,” he tweeted.