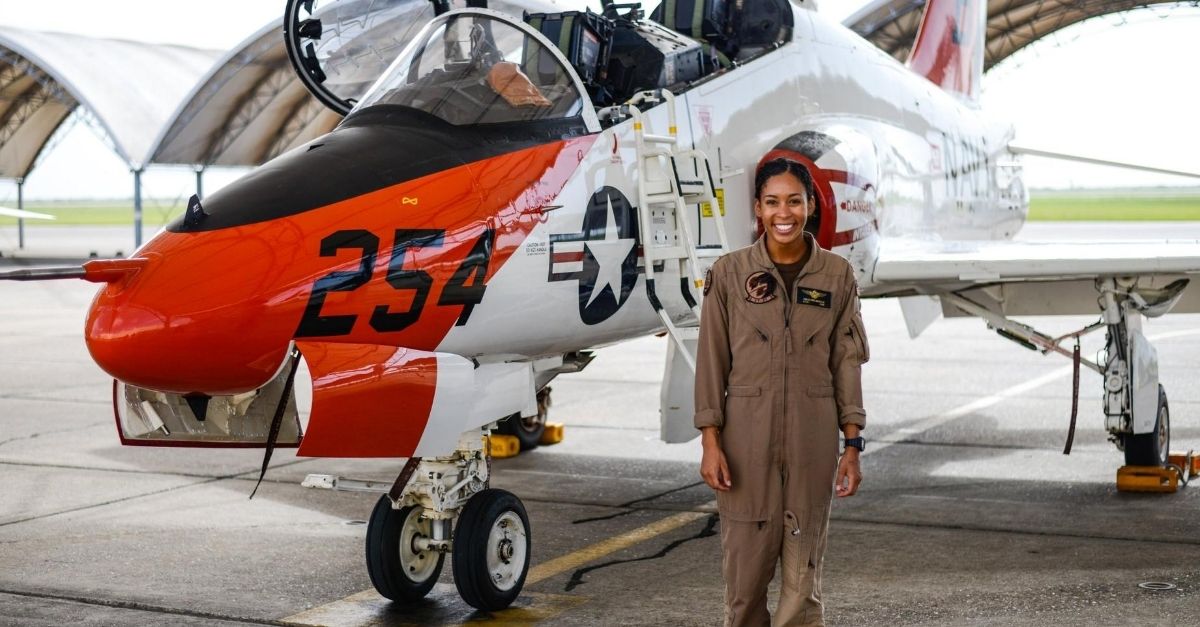 One woman is breaking barriers by becoming the U.S. Navy’s first Black female Tactical Jet pilot for the U.S. Navy. Through a new video released by the Navy, Lt. j.g. Madeline “Maddy” Swegle stated,”I don’t think the goal in my life is to necessarily be the first at anything. That was never something that I set out to do, [piloting] was just something I was interested in and I found out later. I am really honored that I get to wear the wings and get to fly planes and call myself a pilot.”

Her winging ceremony is set to take place on July 31, 2020. Swegle, who is a Virginia native, became a U.S. Navy’s tactical air (TACAIR) pilot on July 7, completing her final undergraduate training in a T-45C Goshawk training aircraft. This paved the way for her to fly aircraft like the F/A-18E/F Super Hornet, the F-35C Joint Strike Fighter and the EA-18G Growler.

Through twitter, the Naval Air Training shared the good news, writing, “BZ to Lt. j.g. Madeline Swegle on completing the Tactical Air (Strike) aviator syllabus. Swegle is the @USNavy’s first known Black female TACAIR pilot and will receive her Wings of Gold later this month. HOOYAH!” She is currently assigned to the Redhawks of Training Squadron 21.

Matthew Maher, commanding officer of training, stated that in order to get to that level, one must be a top performer since these are one of the best pilots in the world trained by the best. He noted, “It takes long hours, a lot of blood, sweat, and tears and a commitment to excellence day in and day out. … They’re going to go out and make all of us very proud.

The student naval aviator will receive her Wings of Gold during a small ceremony at Naval Air Station located in Kingsville, Texas, on July 31st. Vice Adm. DeWolfe “Bullet” Miller III, commander of the Naval Air Forces, released a statement, speaking about Swegle’s accomplishment, noting, “Lt. j.g. Swegle has proven to be a courageous trailblazer. She has joined a select group of people who earned Wings of Gold and answered the call to defend our nation from the air. The diversity of that group — with differences in background, skill, and thought — makes us a stronger fighting force.”

Swegle said she had always dreamed of being a pilot since she was young after her parents would take her to see the Blue Angels, a Navy flight demonstration squadron. She noted her parents always told her she could be whatever she set her mind to. The pilot called the process of training with a higher performance aircraft at this level exhilarating, rewarding, and daunting at the same time. She noted,

“[Jet piloting] is fun because it is difficult at the same time. I know that I had to work to get [the jet] to behave and it took a lot of fighting the aircraft and figuring out how it was going to perform. “Looking back it’s amazing to think about where I started and I had never been on an airplane before, so it’s just one step at a time. It’s really cool to think of all of the things I’ve done now which I’d never think I’d be able to do.”

Swegle is following the footsteps of Brenda Robinson. Robison is the first Black female naval aviator who earned her Wings of Gold on June 6, 1980.