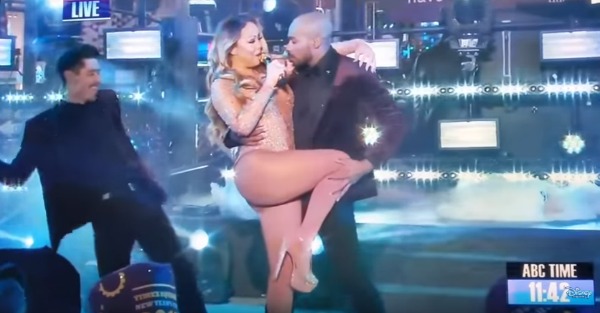 What a complete train wreck.

Mariah Carey’s much hyped performance on ABC during “Dick Clark’s Rockin’ New Year’s Eve” was one of the worst things you’ll see — and it was was like a car wreck you couldn’t take your eyes off. She was disgusted, lost and flustered — and it made for great TV, in a bad way.

First, she had to tell the dancers just to walk her down the stairs. Then, the vocal track for her hit song, “Emotion,” didn’t play, which made it obvious she needed vocal help through the performance.  And when the tracks didn’t play, she didn’t even try to sing. That left a mortified Mariah to tell the audience, “it is what it is” and ask them to sing along to a song that contains notes she obviously has a hard time hitting anymore, (Anyone who has seen her performances lately knows she shies away from those super human high notes she used to hit with ease.)

She was obviously flustered when at the end of the disaster, she told the audience: “That was … amazing.”

Her next song, “We Belong Together,” started better, but that too quickly fell off the rails. She was lip syncing much of the song and at a couple of points just dropped the microphone to her side. At the end of her performance, she sarcastically told the crowd, “It don’t get no better,” and walked off in disgust.

Then, she tweeted this out: