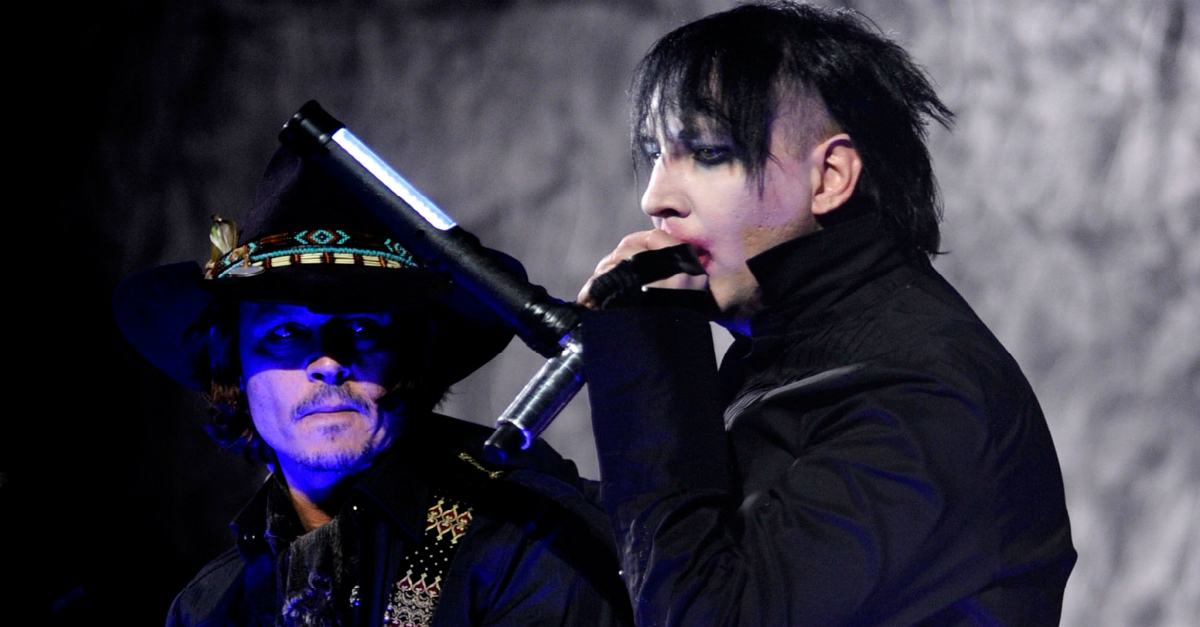 Hollywood superstar Johnny Depp has already appeared in two of Marilyn Manson’s recent music videos (“SAY10” and “KILL4ME“), but a tweet recently sent out by the controversial rock star implied that the pair could be spending a lot more time together.

Johnny Depp is considering a position on guitar. Sound great?

Is he being serious? The duo already have matching tattoos, so it’s not inconceivable that Depp could fill the vacancy.

Also, Depp could probably use some extra cash!

The actor is currently locked in an ongoing legal battle with his former business team, The Management Group (TMG). If a new foreclosure action filed by TMG goes through, Depp might be forced to turn over five Los Angeles properties to the auctioneers to repay a $5 million loan TMG says the actor took from them in December 2012, according to Page Six.

While they acknowledge that Depp paid ?interest and some principal payments,? they say the money stopped coming once he and his team parted with TMG.

So don’t be surprised if you see Jack Sparrow on stage with Marilyn Manson sometime soon.

RELATED: Paris Jackson admits she ?cried like a g*****n baby? when she met one of her idols

Last year, Manson has fired his longtime bassist, Jeordie White ? who goes by the stage name Twiggy Ramirez ? after rape allegations against him surfaced.

White was accused of rape by his former girlfriend and lead singer of Jack Off Jill, Jessicka Addams. In a lengthy Facebook post, Addams shared details of the alleged rape and abuse during her relationship White.

She stated that she was discouraged from revealing the incidents by her record label, which she claimed was fearful that ?the big machine behind Marilyn Manson would use their power to destroy not only Jack Off Jill, but [her] name, Jessicka, as well.?

Soon after the post, Marilyn Manson announced that he?d split with White.

He tweeted, ?I have decided to part ways with Jeordie White as a member of Marilyn Manson. He will be replaced for the upcoming tour. I wish him well.?

I have decided to part ways with Jeordie White as a member of Marilyn Manson. He will be replaced for the upcoming tour. I wish him well.

Addams responded with gratitude at the action.

She replied, ?Thank you. I am truly at a loss for words.?