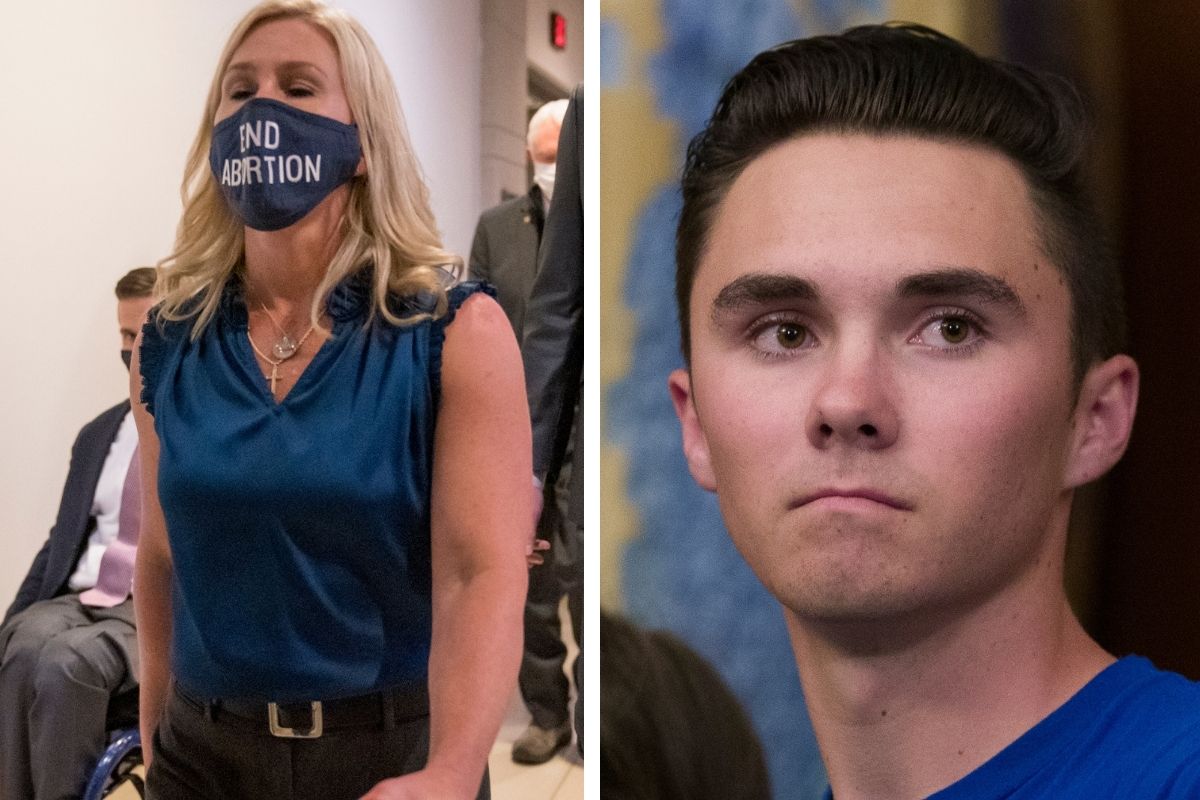 “I confronted David Hogg twice, and he ran away from me.

I?m looking at this idiot David Hogg leading these girls who are clueless, absolutely clueless, into giving up the greatest thing that protects them, and as an American woman, I know that?no one?s covering my story. I want my Second Amendment, but none of you people are covering my voice?you?re only covering their voice because they?re paid for.”

Well, she’s definitely getting the coverage she wanted, as House Republican Rep. Marjorie Taylor Greene, R-Ga, is under high criticisms once again, after a video from a 2019 interview with Georgia Gun Owners Inc, before she was elected to Congress, showed her claiming that Parkland school shooting survivor David Hogg, “only talks when he is scripted,” and that he is, “like a dog. He’s completely trained.” She further implied that Hogg only was campaigning for gun control legislation because he was being paid to do so, calling him a “guy with his George Soros funding.”

In the video, she tries repeatedly and incessantly to get a response from Hogg, asking the then 18-year-old kid, “Do you realize that if there had been guards with guns at your school that are trained that Nicolas Cruz would not have killed 17 people in your high school? Good guys with guns hurt bad guys with guns, they’ll kill them, and it will reduce the number of deaths.”

Greene had spoken these comments after a video had surfaced of her harassing the now 20-year-old Hogg and other Parkland shooting survivors who were visiting the US Capitol to discuss gun control legislation. She had told NBC News unashamedly that she had been, “going from office to office in the Senate to oppose the radical gun control agenda that David Hogg was pushing.”

Greene has past supported conspiracy theories that suggest and support that the Parkland school shooting in Florida, where 17 people were killed at Marjory Stoneman Douglas High School, was a “false flag” attack. And in 2018, she stood behind a social media post that claimed both the Parkland shooting and Sandy Hook shooting were both staged. She also has been known to support QAnon conspiracy theories in the past but has since then apologized to her GOP colleagues for doing so.

Hogg, a young gun-control activist, joked in response to the video on Twitter, saying, “TF?? Why is she so obsessed with me? To be honest it?s kind of creepy for someone to be that obsessed with an 18-year-old,” and then proceeded to tell NBC in a statement that,” for the sake of the future of our country, she must be removed from Congress.”

In a statement given on Monday, Senate Minority Leader Mitch McConnell, R-Ky said that Greene was, “not living in reality,” and Senator Mitt Romney, R-Utah had told reporters that the Republican Party should, “make it very clear that she does not represent us in any way.”

I would assume that no matter what position lawmakers, Democrat or Republican, take on gun laws, that they don’t necessarily also want to be associated with someone who completely stands behind the possibility that some mass shootings were staged.

Watch: Joe Biden Claims Trump Is The First Racist President To Be Elected