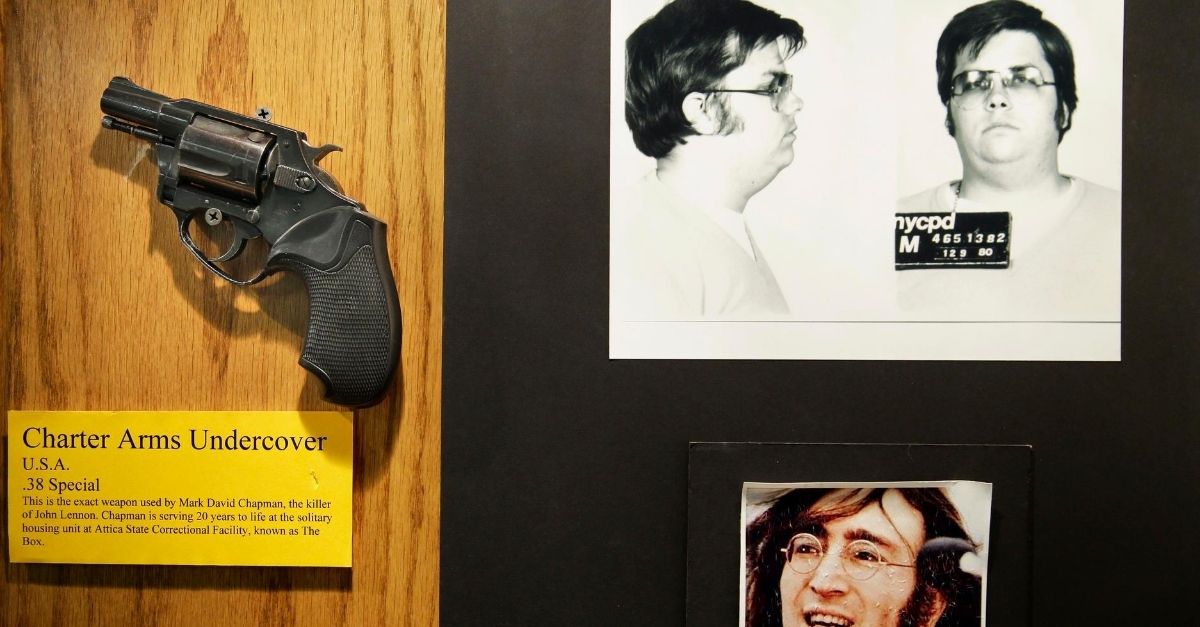 Mark David Chapman is known as only one thing: the murderer of the legendary John Lennon. Whether you think he was a Manchurian candidate, deranged Beatles fan, or simply unstable, we won’t soon forget his mark on history.  On December 8, 1980, John Lennon and his wife Yoko Ono returned to the historic Dakota apartment building where they lived in New York City. The locale was on Central Park West and 72nd Street and housed the important and affluent. The ex-Beatle had spent the evening at Record Plant studio mixing music.

Earlier in the day, he’d encountered and signed a copy of the Double Fantasy album for Chapman. But, as the singer and his wife walked from their limo hearing at 11 p.m., Chapman hid in the archway of the Dakota with a Charter Arms .38 Special Revolver. He stepped off the curb and shot his idol in the back and shoulder with four hollow-point bullets.

Chapman was born in Fort Worth, Texas on May 10, 1955. In a cruel, yet predictable turn of events, par for the course of the abuse cycle, Chapman witnessed his mother being abused at the hands of his father from a young age. At school, trouble followed. He was bullied and often skipped school. At one point, he ran away and lived in Atlanta for two weeks on the street. This was just the beginning of this pattern in his life.

Mark Chapman was a huge Beatles fan. He felt similarly to John Lennon, but in a way that was somewhat strange. He felt similar to Lennon because of what he described as his ‘alienation from society’. During on LDS trip, Chapman even fell under the delusion and told his friend that he had become John Lennon. However, that love dissipated when the London Evening Standard interview featured Lennon saying that the Beatles were ‘more popular than Jesus‘ in 1966. Suddenly the mega-fan was mega-mad. However, he let it simmer. on the back burner. After reading John Lennon: One Day at a Time in 1980, Chapman’s obsession turned into hatred of Lennon. To Chapman, Lennon had become a figure who “espoused virtues and ideals that he didn?t practice”. This new-found hatred turned into wanting to kill John Lennon.

Instability and The Catcher in the Rye Conspiracy

During the trial, Chapman was determined by psychological professionals to be psychotic, a paranoid schizophrenic, and possibly suffering from manic depression. Without access to their assessment, this conclusion is supported by his erratic behavior throughout his life.

One of these examples is the way he latched on to a book assigned to high school students to read, call The Catcher in the Rye by J.D. Salinger. The book, for years, has held much controversy. This book was found amongst Champan’s possessions after the murder. The book really seemed to take a hold on Chapman. He identified with the young protagonist of the book feeling unheard and isolated. He started calling himself and signing letters by the name of the book’s protagonist, Holden Caulfield.

In the month before killed Lennon, he also flew back and forth between New York and Hawaii where he was living with his wife, Gloria, his former travel agent. His mood swings were one of two things: killing himself or killing John Lennon.

Where is Mark Chapman Today?

A post shared by A História da Música (@ahistoriadamusica)

Mark Chapman remains imprisoned since his sentencing in 1981. His original sentence was twenty years to life for his murder. He has been denied parole multiple times, often from personal letters from Yoko Ono pleading that the killer of her husband not be released. This August he was also denied parole, making it his 11th time. During a hearing at the Wende Correctional Facility located in New York, Chapman relived the day he killed the musician. He noted,” I assassinated him … because he was very, very, very famous and that?s the only reason and I was very, very, very, very much seeking self-glory. Very selfish. I deserve zero, nothing. At the time I deserved the death penalty. When you knowingly plot someone?s murder and know it?s wrong and you do it for yourself, that?s a death penalty right there, in my opinion.”

Since then, Chapman accepted he may die in prison. He recently said he should have been sentenced to death for what he did. He has also called what he did “creepy”, saying that he always thinks about the pain he inflicted on Yoko Ono. In August 2022, Chapman will be up for parole again at the age of 69.

Editors Note: This article was originally published on July 24, 2020.