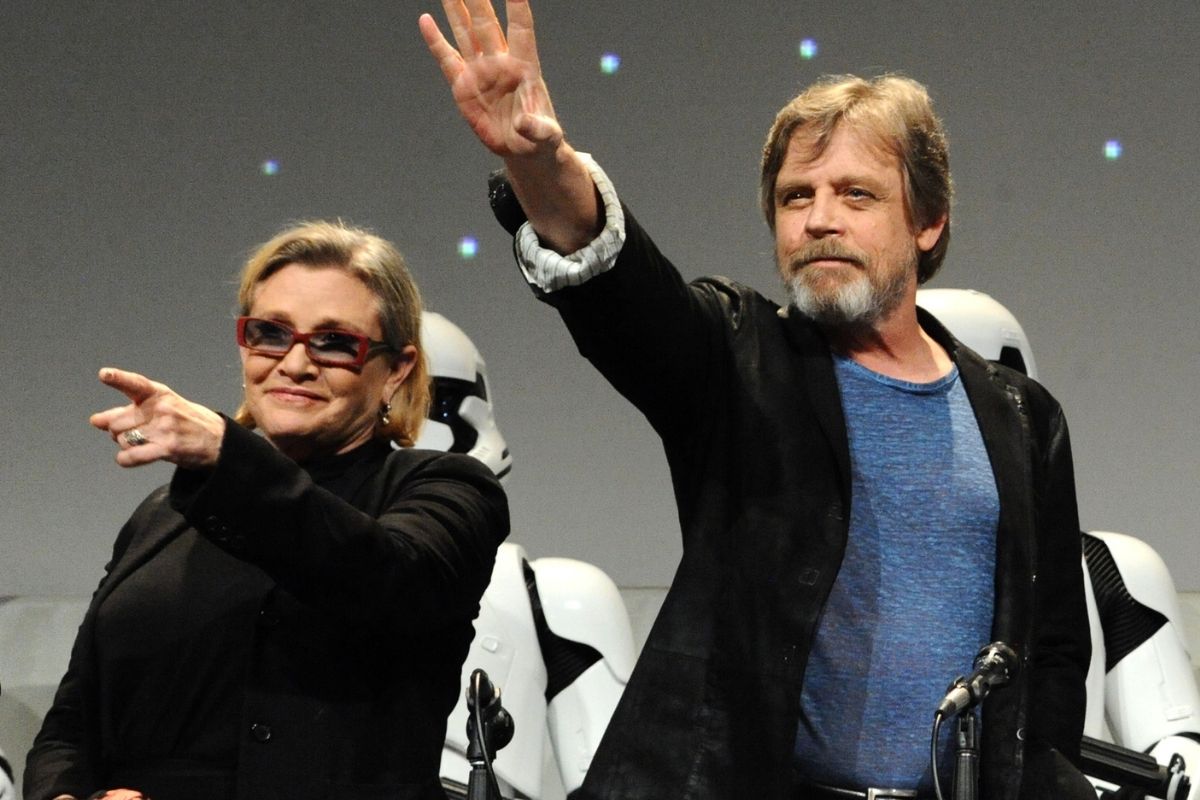 In honor of May 4th — May the Fourth Be With You — let’s take a moment to remember some awesome behind-the-scenes Star Wars gossip. In 2017, Mark Hamill publicly recalled a time when things go hot and heavy between him and Carrie Fisher on-set, confirming the pair had more than just screen chemistry. Hamill, a 66-year-old actor at the time, was currently promoting the 2017 Star Wars flick, Star Wars: The Last Jedi.

In an interview with The Guardian, Hamill recalled there was instant chemistry between him and Fisher while filming the first Star Wars movie, which came out in 1977. Despite the attraction, he knew not to get involved with a co-star. But on one apparently booze-induced moment of passion, the two apparently broke professional protocol with a make out session.

“I remember one time ? I?m sure alcohol was involved ? we were talking about kissing techniques. I said: ?Well, I think I?m a fairly good kisser. I like to let the women come to me rather than be aggressive.? And she said: ?What do you mean?? Well, next thing you know we?re making out like teenagers!? Hamill said.

Although not necessarily a bad idea, things did not go much farther than that.

“But the one thing that drew Carrie and me back from the precipice was we kind of became aware of what we were doing and just burst out laughing. Which was unfortunate for me because the rocket launch sequence had been initiated,? Hamill joked.

After that incident, though, Hamill said they became great lifelong friends, ironically as close as siblings. That makes sense since he played Luke Skywalker and Fisher played Princess Leia throughout the Star Wars series. If you haven’t seen any of the George Lucas films, then you must know that characters Luke Skywalker and Princess Leia, although having an initial love interest, eventually find out that they are real siblings.

However, Princess Leia did find love in the series, eventually having children with Han Solo, played by co-star Harrison Ford. The characters’s children end up becoming the main villains in the later Star Wars movies. The final Star Wars film with all three original co-stars aired in 1983… until they were reunited for the 2015 sequel Star Wars: Episode VII – The Force Awakens.

Carrie Fisher and Harrison Ford on the set of Star Wars pic.twitter.com/y8Rfu7IAmJ

?I wasn?t her best friend ? she had so many friends and I?d go to parties with her and I would be the only one there I?d never heard of. But there was a comfort level that we?d achieved because she knew I wasn?t ever angling for a favor or trying to get her to introduce me to this agent or this director. We became like real siblings over the years,? he said.

Hamill said that Fisher has been sorely missed by all. She died of a heart attack on December 27, 2016, before Star Wars: The Last Jedi was released.

“Gosh darn it, I still think of her in the present tense, you know?” he said.