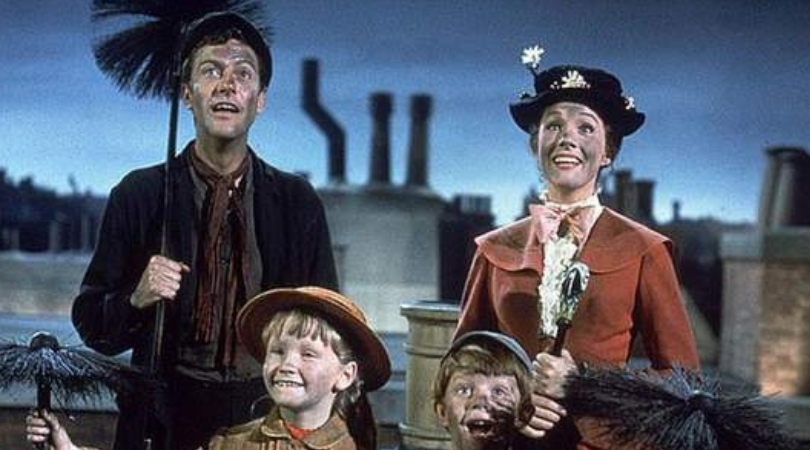 It looks like some people just can?t enjoy the simple pleasures in life. In November 2018, Disney decided to release a ?Mary Poppins? sequel, led by Academy Award nominee Emily Blunt, called “Mary Poppins Returns?. Which, if you haven’t seen, you should because you’re seriously missing out. As expected, this was huge news for ?Mary Poppins? fans, because honestly, who didn?t like the first one?

Of course, this prompted several people to go back and watch the original version of the classic Disney tale, which is where Professor Daniel Pollack-Pelzner comes in. Turns out, he is deeming the classic 1964 film ?Mary Poppins? racist, accusing Julie Andrews of ?blacking up? her face with soot while dancing with several chimney sweeps.

Yes, according to a New York Times op-ed called ?Mary Poppins? and a Nanny?s Shameful Flirtin With Blackface,? Professor Pollack-Pelzner slammed the iconic dance scene where Dick Van Dyke Bert and Poppins are on a rooftop dancing to ?Step In Time.? The professor stated that when they get their face cover in soot, instead of wiping it off, she gamely ?powders her nose and cheeks even blacker.?

The professor, who surprisingly teaches gender studies and Shakespeare studies at Linfield College, linked the scene to racism in P.L Travers? novels, in which he claims ?associate chimney sweeps? blackened faces with racial caricatures. Pollack-Pelzner also aims at naval officer Admiral Boom, who orders his cannons fired on the roof after mistaking the dark figures of the chimney sweeps for ?Hottentots?, which is a racial slur. The Shakespeare professor (Who is not a visual race or culture professor…rather than a Shakespeare professor) argues that blackface is part of the “Disney origin story”, referring to 1933’s Mickey Mouse short stories features Mickey in blackface.

“These aren?t really black Africans; they?re grinning white dancers in blackface. It?s a parody of black menace; it?s even posted on a white nationalist website as evidence of the film?s racial hierarchy.”

For those of you who don?t know or understand why blackface is considered a major offense, blackface can be traced back to mid-19th-century. At times, white performers darkened their skin to look stereotypically ?black? which was intended to be funny to the white audience. Of course, the black community was hurt and felt offense immediately after these shows were a fundamental shape of American entertainment through the 19th into the 20th century. Because, they have every right to.

Blackface reinforced the idea that black people were targets of ridicule and mockery, reminding us of stereotypes about “black criminality and danger”. Which ultimately, yes, it is a big offense and it’s a good thing that people acknowledge it and stopped the racist act.

Nowadays, blackface has become much more than just paint, shutting down the mere thought of it. Just last year, Anchor Megyn Kelly was criticized for saying it was acceptable for a while person to dress as a black person as a Halloween costume. Her comments caused wide sprain anger nationwide, and she apologized of course, but her show was ultimately canceled.

Where am I going with this? Well, Mary Poppins was released in 1964, so this “current controversy” kind of missed the whole point of suggesting that subliminal and opaque racism in popular culture is an exception rather than a rule. Now, before you start hate commenting, let me explain.

Of course, he is not wrong in finding problematic things that in this day and age we can find quite wrong or offensive, but that’s the point I am trying to make here. Social norms change, we all understand that. Going back to try and fix the past doesn’t achieve anything except default attention to the real case of injustice. If anything, exposing people to prejudices and actions of old movies and shows can show us how far we’ve come in the whole racism aspect. The actions that were made in 1960 don’t define the actions we are taking now in 2019.

So, as expected by several online users on social media, the allegations didn’t sit well with them either, calling his Hollywood tactic as a desperate plea for attention. The sequel ?Mary Poppins Returns? is currently nominated for several Academy Awards including best costume design, production design, original score, and best song for ?The Place Where Lost Things Go?.

Mary Poppins wasn’t flirting with black face! It was soot in their faces from being a chimney!!! Stopped spreading racism claims on non racist things like this!!!

Ummm Seriously? #MaryPoppins is now in the Cross hair? THEY WERE CHIMNEY SWEEPERS!!! NOT "BLACK FACE IMPERSONATORS" pic.twitter.com/Nwl8oT3VUk

End of the world when Hollywood thinks Mary Poppins is racist

People are searching for racism like it's oil. Racism has become a commodity, figuratively speaking. If it were a literal commodity, however, it's value would be through the roof at this moment in history. https://t.co/Ygsm06jtC0

It was soot from the chimney she'd just flown up, you nitwit https://t.co/7gQyAEqF88

Editor’s note: This article was originally published on February 5, 2019.