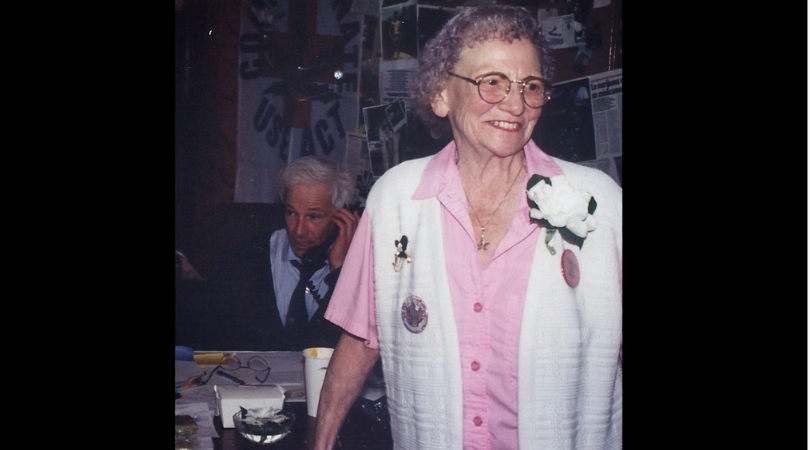 Mary Jane Rathbun was born in Chicago, Illinois in December 1922. She would grow up to be known as “Brownie Mary” because of her marijuana brownies and activism for the legalization of medical marijuana. Yeah, she was that kind of Mary Jane.

Raised in Minneapolis by a Catholic mother, she attended catholic school at a young age. Despite being given a wholesome name and being raised in a pious setting, she was a rebel early on. At 13, while attending Catholic School she hit a nun who tried to physically discipline her. Shortly after she dropped out and got a job as a waitress. When she wasn’t working she was working as an activist for women’s abortion rights.

During World War II Rathbun moved to the west coast to San Francisco, California. At a USO dance, Rathbun met her future husband. They married, raised a daughter and later divorced. Her daughter, Peggy, died at the age of 22 in the 1970s in a car accident. Rathbun, working at IHOP, started to make her magical brownies from her house and in a supermarket on Castro Street.

She advertised on San Francisco bulletin boards and eventually, the cops came knocking at her door. At 57, she was arrested for possession. An undercover police officer disguised as a customer found more than 18 pounds of cannabis and 54 dozen pot brownies.

Volunteer of the Year

Just taking a moment to acknowledge one of our great pioneers, Mary Rathbun aka Brownie Mary. For those who are not familiar, Mary moved to San Francisco during WWII, following the death of her daughter at a young age Mary became a leading activist for marijuana, and has been credited with providing thousands of AIDS victims with pot brownies. This was all prior to the health industry publicly acknowledging the health benefits. #browniemary #weed #cannabis #marijuana #potbrownies

The news dubbed her “Brownie Mary.” For this, she received 500 hours of community service and 3 years of probation. Since she was already an activist, she started working with the Shanti Project, supporting aids patients. Mary Jane also volunteered at the San Francisco General Hospital AIDS ward. She found that aids patients, as well as cancer patients, responded well to the pot brownies, it helped with wasting syndrome.

After her community service ended, she continued to make the brownies, even though she was on probation. She was also arrested again for violating her probation and being in possession of marijuana. This didn’t stop her. She truly cared about the people she was working with and in the late ’90s, she was given a “Volunteer of the Year” Award by the San Francisco General Hospital AIDS ward.

With California having legalized medical marijuana researchers began to explore the potential of helpfulness of cannabis for those with HIV and AIDS.  There was a lot of pushback initially, but Brownie Mary definitely made a difference. So much that August 25, 1992, was declared to be Brownie Mary Day. Rathbun may have dropped out of Catholic school, but she was truly a saint. Somebody put her on a dollar bill…. or a dime baggie, at least.