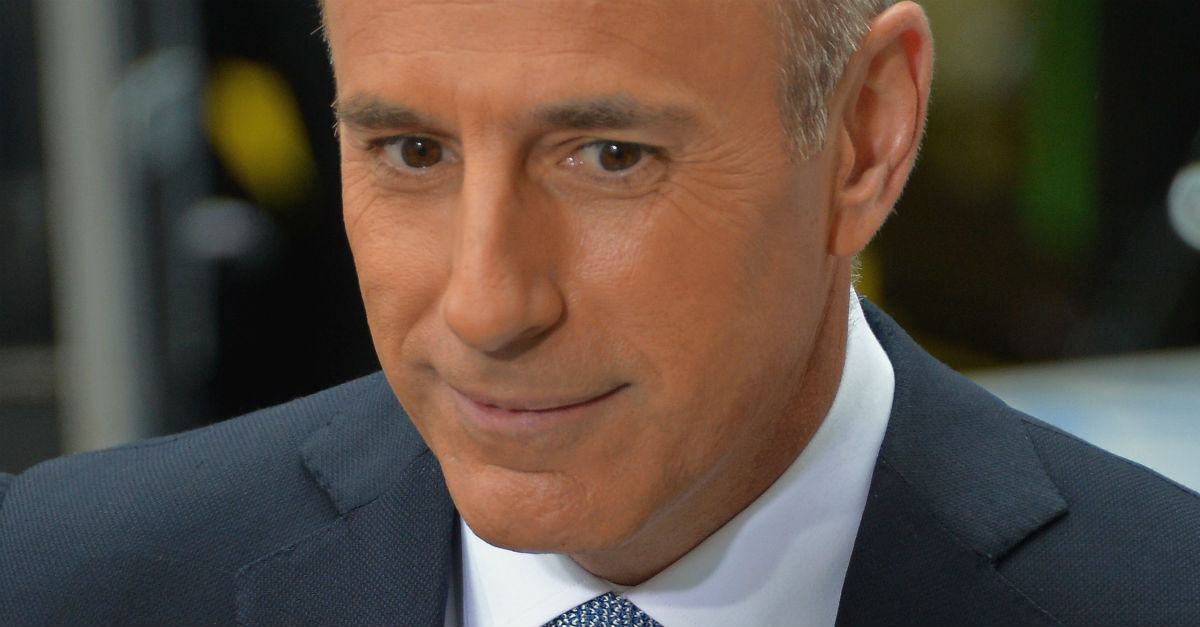 According to a comedy writer, disgraced TV host Matt Lauer joked about sleeping with interns even while prepping to speak to victims of sexual misconduct, reports Page Six.

RELATED: No one seems happier than Connie Chung that Matt Lauer is gone for good

After a writing a controversial article in 2009 about the treatment of women writers on the “Late Show With David Letterman,” Nell Scovell said she was discussing a potential appearance on “TODAY” to speak about the topic when Lauer, 60, made a comment that made her “queasy.”

Scovell — who created “Sabrina the Teenage Witch” — says in her forthcoming book “Just the Funny Parts … And a Few Hard Truths About Sneaking into the Hollywood Boys’ Club” that she told Lauer that she was wary of appearing on “TODAY” to discuss the sexual discrimination issues because “people want to hear about interns in the bedroom, and I want to talk about gender in the writers’ room.”

In response to her asking, “You’re OK if I don’t discuss Dave sleeping with interns?” she said Lauer replied, laughing, “Hey, I couldn’t be held to that high standard.”

Because Matt’s ‘joke’ made “[her] queasy,” she passed on the “TODAY” interview.

This really happened. How do I know? I was there. https://t.co/4IC9xRyBq6

As previously reported by Rare, in November 2017, it was announced that Lauer had been fired from NBC News and “TODAY” following a complaint of sexual misconduct made by a female colleague.

He was accused of numerous affairs, including a 2011 rumor that he was seeing celebrity chef and “TODAY” contributor, Giada De Laurentiis. He was also accused of “preying on younger staffers at ‘TODAY.’”

RELATED: Despite all of the rumors, Matt Lauer thought he would never be fired from his job on “TODAY”

“Nobody knew what Matt was doing with the interns and junior producers. It was appalling,” a source said.

The woman who came forward with the allegations stemming back to the Sochi Olympics was reportedly among the young staffers Lauer allegedly pursued. The morning before he was let go, Lauer reportedly “was acting his usual cocky, confident self. He had no idea that this would turn out to be his last day on the show.”