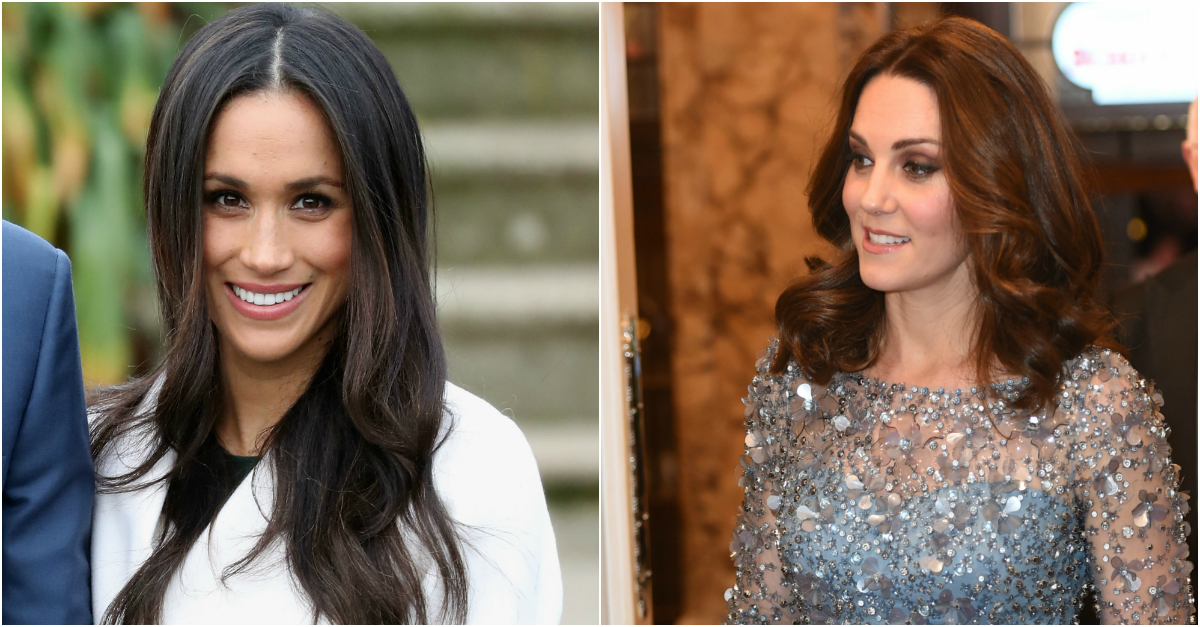 LEFT: Chris Jackson/Getty Images RIGHT: Eddie Mulholland - WPA Pool/Getty Images
LEFT: LONDON, ENGLAND - NOVEMBER 27: Meghan Markle during an official photocall to announce the engagement of Prince Harry and actress Meghan Markle at The Sunken Gardens at Kensington Palace on November 27, 2017 in London, England. Prince Harry and Meghan Markle have been a couple officially since November 2016 and are due to marry in Spring 2018. (Photo by Chris Jackson/Getty Images) RIGHT: LONDON, UNITED KINGDOM - NOVEMBER 24: Catherine, Duchess of Cambridge attends the Royal Variety Performance at the Palladium Theatre on November November 24, 2017 in London, England. The Royal Variety Performance takes place every year, either in London or in a theatre around the United Kingdom. The event is in aid of the Royal Variety Charity, formally, The Entertainment Artistes Benevolent Fund, of which The Queen is Patron. The money raised from the show helps hundreds of entertainers throughout the UK, who need help and assistance as a result of old age, ill-health, or hard times. (Photo by of Eddie Mulholland - WPA Pool/Getty Images)

After announcing their long-rumored engagement on Monday, Nov. 27th, Prince Harry and his American bride-to-be sat down with the BBC and addressed the entire world in a delightfully candid interview.

During the televised chat, the pair shared some cute stories and provided a few adorable details regarding their life as a couple over the past year and a half, including how Harry’s mundane but oddly chivalrous proposal went down, and the story of how Meghan met Queen Elizabeth II for the first time.

The royal couple also offered a snippet of insight into how Markle has been bonding with her soon-to-be brother and sister-in-law, Prince William and Kate Middleton, also known as the Duke and Duchess of Cambridge. As the prince mentioned, William and Kate had been “longing” to meet the new woman in Harry’s life.

RELATED: Meghan Markle gave us a peek at her ring as she and Prince Harry made their first appearance as an engaged couple

“I’d been seeing her for a period of time when I literally didn’t tell anybody at all,” Harry explained. “And then William was longing to meet her and so was Catherine, so you know being our neighbors, we managed to get that in a couple of?well quite a few times now and Catherine has been absolutely…”

“Amazing, as has William as well, you know, fantastic support,” Harry went on. They also added that they’d been able to share “a handful of teas and meetings and all sorts of gatherings over at his place as well,” with Meghan’s future father-in-law, Prince Charles.

Clearly the former actress has been welcomed with open arms by the historically snooty Royal Family.

“The family together have been absolutely, you know, a solid support and my grandparents as well have been wonderful throughout this whole process,” Harry said of his relatives. “They’ve known for quite some time, so how they haven’t told anybody is again a miracle in itself.  But, now the whole family have come together and have been a huge amount of support.”