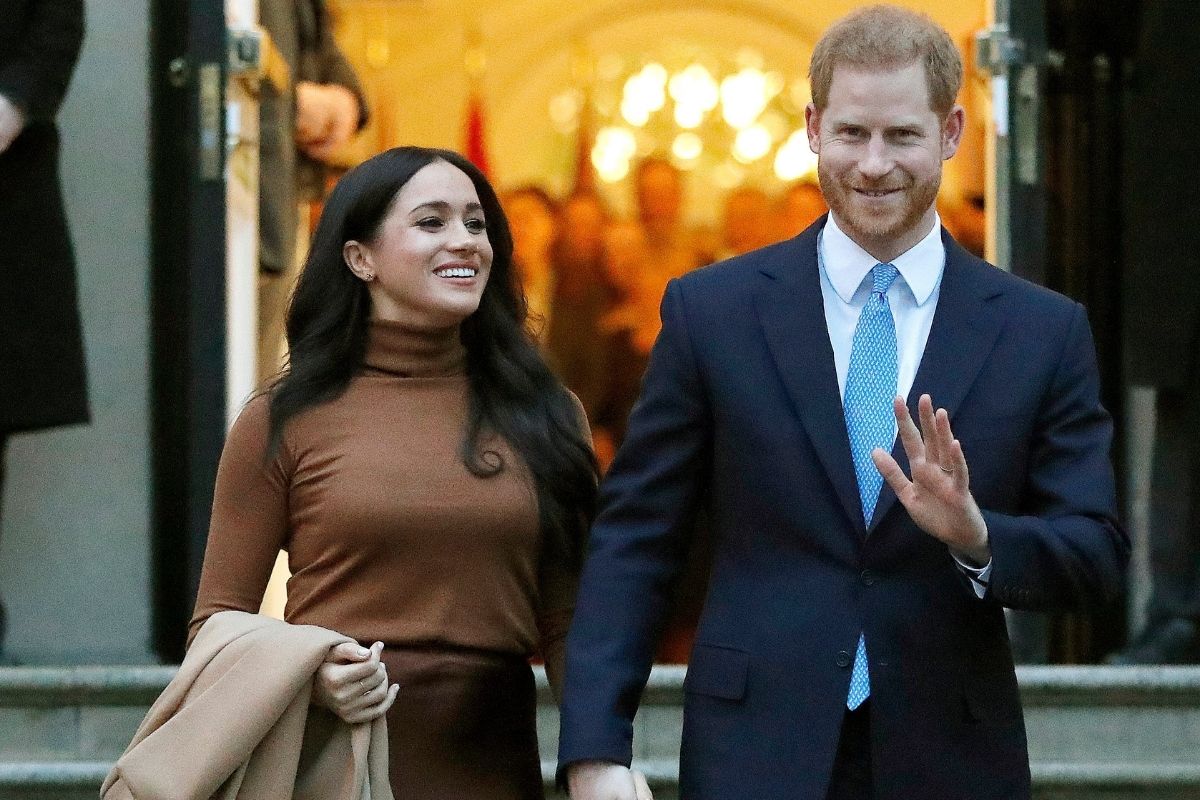 Editor’s note: This article was originally published on March 8, 2021. It was updated after Queen Elizabeth II decided to break her initial silence on Prince Harry and Meghan Markle’s interview with Oprah, and again after Prince William spoke to the press.

The royal family had initially decided not to watch or comment on Prince Harry and Meghan Markle’s interview with Oprah Winfrey. But now Prince William has briefly responded to the accusations, saying the royals are “very much not a racist family.” This comes after a statement released on behalf of Queen Elizabeth II. That statement read:

“The whole family is saddened to learn the full extent of how challenging the last few years have been for Harry and Meghan. The issues raised, particularly that of race, are concerning. While some recollections may vary, they are taken very seriously and will be addressed by the family privately. Harry, Meghan and Archie will always be much loved family members.”

After Meghan Markle had dropped bombs during the Oprah interview, alleging racism, the Palace also launched an investigation into the bullying accusations against Markle. According to the Times, Jason Knauf, the Duke and Duchess of Sussex’s former communications secretary, had actually filed a complaint against Markle back in October 2018, and it was sent to the head of HR.

The Times also allegedly claimed that the, “Duchess was able to bully two PAs out of the household in the past year” and was “seeking to undermine” another employee’s confidence. However, the royal statement responded with, “We are clearly very concerned about allegations in The Times following claims made by former staff of The Duke and Duchess of Sussex. Accordingly our HR team will look into the circumstances outlined in the article. Members of staff involved at the time, including those who have left the Household, will be invited to participate to see if lessons can be learned. The Royal Household has had a Dignity at Work policy in place for a number of years and does not and will not tolerate bullying or harassment in the workplace.”

Nevertheless, a spokesman for the Sussexes denied the allegations, saying that they are,  “a calculated smear campaign based on misleading and harmful misinformation,” and that, “The Duchess is saddened by this latest attack on her character, particularly as someone who has been the target of bullying herself and is deeply committed to supporting those who have experienced pain and trauma. She is determined to continue her work building compassion around the world and will keep striving to set an example for doing what is right and doing what is good.”

After weeks of anticipation, Oprah Winfrey’s tell-all interview with Prince Harry and Meghan Markle finally aired on Sunday. Several bombshells were revealed for the 2-hour affair which left the audience in total shock. Markle began by telling Winfrey that the couple actually eloped three days before their wedding back in 2018. The couple apparently wanted a union between them and wanted vows just for themselves, so the Archbishop of Canterbury married them in their backyard. Another revelation was a concern from the royals about Archie’s skin color.

Meghan, who is half-Black, told Winfrey that there were several concerns and conversations among the role of the family themselves ahead of her son Archie’s birth about how dark his skin might be. When Winfrey asked if the issue itself was that he would be ?too Brown and that would be a problem,? Markle explained, “I wasn’t able to follow up with why, but if that’s the assumption you’re making, I think that feels like a pretty safe one.”

Megan Markle Opens Up About Racism

Winfrey went on to ask Prince Harry what concerns his family had opposed to him about his son’s race. He stated, “That conversation I am never going to share, but at the time it was awkward and I was a bit shocked,” he said. “That was right at the beginning… what will the kids look like?”

While reflecting on the negative press that The Duchess has received throughout the years since marrying Prince Harry, she said that it came to a point where the situation felt unsurvivable. She told Winfrey, ?I just didn?t see a solution. I just didn?t want to be alive anymore. And that was a very clear and real and frightening constant thought.? The former actress eventually did tell her husband that she was having suicidal thoughts, saying that what she remembers from the conversation was how he cradled her. The couple had to go to an event at the Royal Albert Hall, later that day, but Harry didn’t think Megan should attend gave her mental state.

After their son was born, both Megan and Harry didn’t choose not to give our Archie a royal title. The duchess stated that while she was pregnant with her son, who was born in May 2019, the royal family wanted to change protocol and not offer her son a royal title. She noted, “They didn’t want him to be a prince or princess … which would be different from protocol and that he wasn’t going to receive security. I was very scared of having to offer up our baby, knowing that they weren’t going to be kept safe.” She added that there was no explanation about why her son was not receiving a title noting that it wasn’t their right to take it away.

Jealousy Among The Royal Family

Earlier this year, Harry and Meghan announced that they were expecting their second child, revealing the gender to Winfrey, noting that it was a girl.  When asked about his reaction when he found out in the ultrasound, Harry responded, ? Amazing. Just grateful. To have any child, any one or any two, would be amazing, but to have a boy and then a girl, what more can you ask for? Now we’ve got our family. We’ve got the four of us and our two dogs, and it’s great.”

As far as the racism that Markle has received from the press and from the Royal Family itself, Harry explained that his family never explicitly acknowledged the racism that she had faced in the Press. But his grandmother, father, and brother and sister-in-law Kate Middleton were all welcoming initially. But apparently, that changed after the Australian tour when they announced that Megan was pregnant for the first time. Referencing his mother, Princess Diana, he saw that the tour was the first time that his family got to see how great she was at the job, which brought back memories. He stated, ?I just wish that we would all learn from the past but to see how effortless it was for Meghan to come into the family so quickly in Australia and across New Zealand, Fiji and Tonga and be able to connect with people.?

After the royal family cut them off in the first quarter of 2020, Harry said that he began using money that his mother had left him. He noted that the family had cut him off financially and had to look for security for him and Markle.  Winfrey asked what his mother would think of the royal exit to which he stated, “I think she saw it coming. I felt her presence throughout this whole process.” As for his relationship between his brother Prince William, who is second in line for the throne, the Duke said that while he still loves his brother they are now leading different lives. He stated, “The relationship is space… at the moment. Time heals all things, hopefully.”

Harry and Meghan On U.K. Tabloids and Princess Diana

Harry to Oprah: “I am so relieved i can sit here to talk to you with my wife by my side, because i cannot imagine what it was like for her [Princess Diana] to do it all alone by herself.”#princeharry #meghanmarkle pic.twitter.com/IKQQ7aLR0P

Editor?s note: This article was originally published on March 4, 2021. It was updated on March 8, 2021, after Prince Harry and Meghan Markle’s Interview with Oprah was released. Below is information that was published before the new updated information was included.

Meghan Markle has decided to speak out about her time as a royal. The former actress is ready to tell the truth in a new sit-down preview for the upcoming interview between Oprah Winfrey and Meghan and Prince Harry. The former actress revealed that she doesn’t see how the royal family could expect her and her husband to stay ?silent? for so long. In the sneak peek shared by CBS, Oprah is heard asking Markle, ?How do you feel about the palace hearing you speak your truth today??

To which she responds, ? I don’t know how they could expect that after all of this time we would still just be silent if there is an active role that the firm is playing and perpetuating falsehood about us. “And if that comes with risk of losing things, I mean I ? there’s a lot that’s been lost already.”

In the clip of a very anticipated tell-all CBS primetime special released over the weekend, Winfrey told Harry and Meghan, ?you said some pretty shocking things here.? Buckingham Palace shortly announced that it will be launching a probe into bullying allegations against Markle herself that were reported by The Times in the UK. Through a statement, they announced, “We are clearly very concerned about allegations in The Times following claims made by former staff of The Duke and Duchess of Sussex.

They stated, “Accordingly, our HR team will look into the circumstances outlined in the article. Members of staff involved at the time, including those who have left the Household, will be invited to participate to see if lessons can be learned. The Royal Household has had a Dignity at Work policy in place for a number of years and does not and will not tolerate bullying or harassment in the workplace.”

The Duchess of Sussex has denied all the allegations made towards her. Through a statement obtained by People after The Times publish their story, a spokesperson for Harry and Meghan stated that the Duchess is very saddened by the latest attack on her character, particularly as someone who has heavily been targeted on bullying herself and is very committed to supporting those who have experienced trauma and pain.

They continued, ?she is determined to continue her work building compassion around the world and we’ll keep striving to set an example for doing what is right and doing what is good.? Oprah’s CBS interview is expected to cover Meghan’s journey from stepping into life as a royal to marriage, mental health, philanthropy work, motherhood, and facing intense public pressure. Harry is expected to join his wife to talk about the historic move to the United States. Oprah with Meghan and Harry is set to air Sunday, March 7 at 8 p.m. on CBS.

Prince Harry recently sat down with James Corden in Los Angeles. The duo spoke about his time in the United States focusing on his life with Megan and their son Archie, Queen Elizabeth II, and Prince Philip. The late-night segment was filmed before Meghan announced on Valentine’s Day that she was expecting their second child and it was also taped before Buckingham Palace confirmed that the couple will not be returning as working members of the Royal Family.

Watch: Behind Princess Diana?s Iconic Wedding Dress and Its Secrets