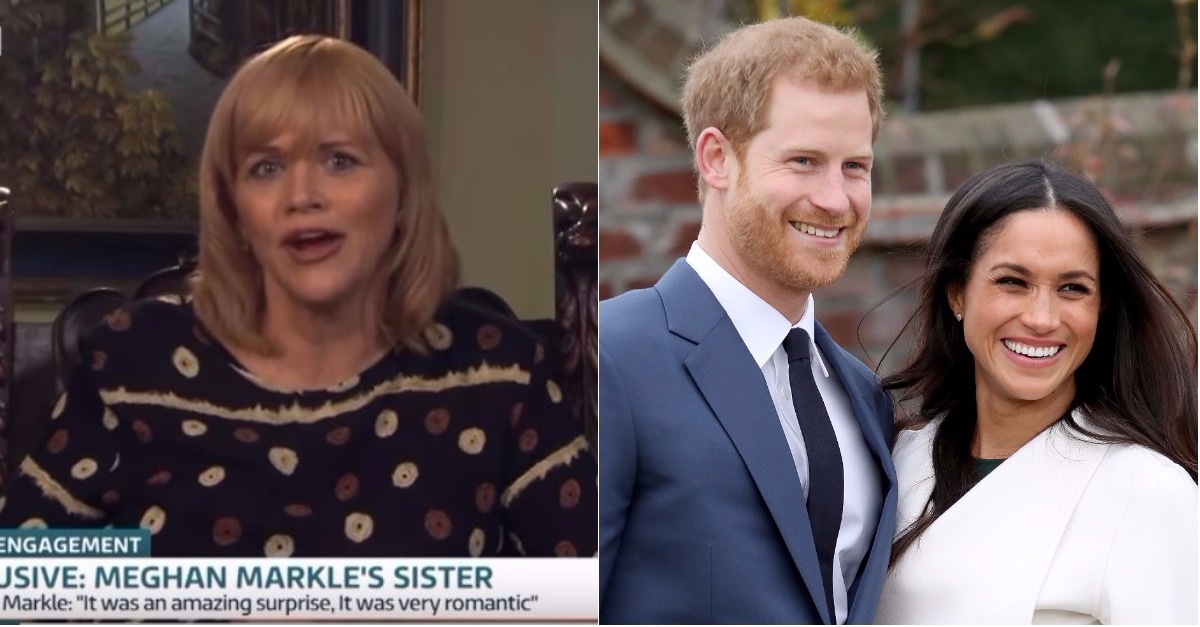 Meghan Markle’s sister is speaking out following news of the upcoming royal wedding.

Samantha Markle dished on her sister’s romance with Prince Harry on Tuesday’s edition of “Good Morning Britain,” just one day after the couple announced they are tying the knot.

“She’s very creative, charming, lovely, full of life, very vibrant and she’s never changed,” Samantha said of her half-sister. “And, she’s overwhelmingly happy and so all of that comes out. It’s quite nice.”

She told Piers Morgan that the engagement announcement is “lovely” but wanted to make sure that the world knew her sister chose Harry because she is in love and not because of his royal status.

“I have to say, what’s more important to our family and certainly to her is that you find the person that is the best fit for you, that you love and who makes you happy. I don’t think it’s so much who he is in terms of royalty as who he is as a man,” she said. “It’s so charming and so warm and when I watch her with him, it’s very real and normal. We only get that once-in-a-lifetime if we are lucky. It’s not about royalty so much as it is about love.”

Samantha and Meghan share a father, Thomas Markle, who has yet to meet the prince but Samantha said that doesn’t change his feelings about his future son-in-law.

“He is excited and very proud,” she said. “Doesn’t every father want his daughter’s happiness? He knows she is happy.”

Samantha blamed the media for “misconceptions” about her family that made headlines following the news of Meghan and Harry’s romance.  In April, The Daily Mail reported that she was planning to release a tell-all book about growing up with Meghan, with a working title of “The Diary of Princess Pushy?s Sister.?

According to the publication, Samantha said her sister was a “shallow social climber” and “had a soft spot for gingers.”

But, now, it seems that Samantha has changed her tune.

“The reality is that most of that was a media construct,” she said. “We are very normal and moving forward, we’re going into the holidays and this is a joyous occasion so I think that any sort of misconception that was out there … we have to let bygones be bygones and just be really happy moving forward.”

“All of that is just silly and we really want her to be happy,” she said.

Samantha also sent a message directly to her sister at the end of the broadcast.

“I just want to say, I love you! I’m incredibly happy for you and cheers to a wonderful life!” Samantha said.

On Tuesday, Meghan and Prince Harry announced via a statement on Kensignton Palace’s Twitter account that they are planning for a May 2018 wedding.

?The marriage of His Royal Highness Prince Henry of Wales and Ms. Meghan Markle will take place at St. George?s Chapel, Windsor Castle in May, 2018,? the statement read. ?Her Majesty The Queen has granted permission for the wedding to take place at the Chapel.?

?The Royal Family will pay for the wedding,? the statement added. ?Further details about the wedding will be announced in due course.?