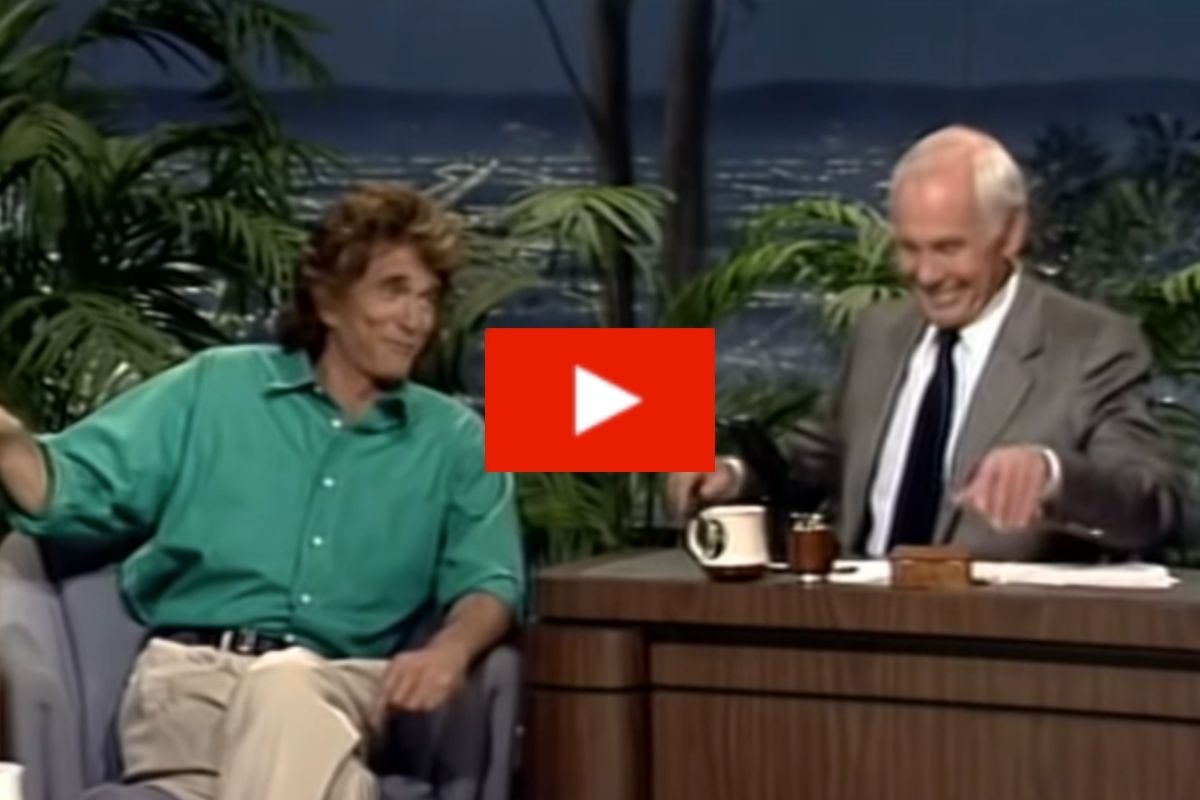 When actor Michael Landon was diagnosed with inoperable pancreatic cancer, he knew he had to get in front of the story before the press did. Instead of despairing, the beloved TV actor contacted his friend Johnny Carson to ask if could help him explain his circumstances to his fans. And so it was that Landon joined Carson to discuss the sad news with NBC audiences on The Tonight Show Starring Johnny Carson.

In the interview, Landon is in good spirits. He jokes with the talk show host, dispelling rumors that he and his wife Cindy Clerico were planning on have one last baby.

“One thing I want to clear up right away is the tenth child business,” the actor joked. “There’s a big headline in one of these incredible magazines about the fact that I want to have a tenth child so my wife will have something to remember me by. I mean, I got nine kids, nine dogs, three grandkids, one bun in the oven, three parrots, and my wife Cindy needs something to remember me by?”

Landon went on to discuss the fan mail he’d been receiving with suggestions on how to cure his cancer. While some of them (like the suggestions of having more sex or swimming with dolphins) were laughable, Landon admitted to complying with a couple of suggestions — like drinking carrot juice and taking coffee enemas.

Carson himself shares a few funny stories about his pal during the interview, revealing that the actor is particularly fond of pranks. According to Carson, Landon had tried to spook him after they’d shared dinner at a Malibu restaurant. As Carson was backing out of the parking lot, his car had made a mysterious squeal.

“This man calls me the next day and says ‘You know the owner called me and you backed over his cat and killed him,'” Carson remembered. The pair of friends returned to the restaurant, where Landon had arranged to have a number of cat-inspired courses written into the menu — including a dish called “Tureen of Tabby”, which was served in motor oil. (For cat lovers: Don’t worry, Carson hadn’t actually killed the cat).

During the show, Carson played a clip from the pilot of his upcoming  CBS series Us. Tragically, Landon died only two months after his appearance on the show. Landon was buried in southern California, beneath a tombstone reading: “He seized life with joy. He gave to life generously. He leaves a legacy of love and laughter.”

Despite his too-short life, Michael Landon left behind an impressive career. The star first won over audiences as Little Joe Cartwright in Bonanza, alongside cast members Lorne Greene (who played Ben Cartwright) and Pernell Roberts (Adam Cartwright). The classic western TV show chronicled the adventures of the Cartwright family on Ponderosa Ranch. After Bonanza, Landon went on to star as Charles Ingalls on the TV series, Little House on the Prairie. The show also starred Melissa Gilbert (who played Laura Ingalls), Karen Grassle (Caroline Ingalls), and Melissa Sue Anderson (Mary Ingalls). Landon’s final TV role before his untimely death was Jonathan Smith on the series Highway to Heaven.