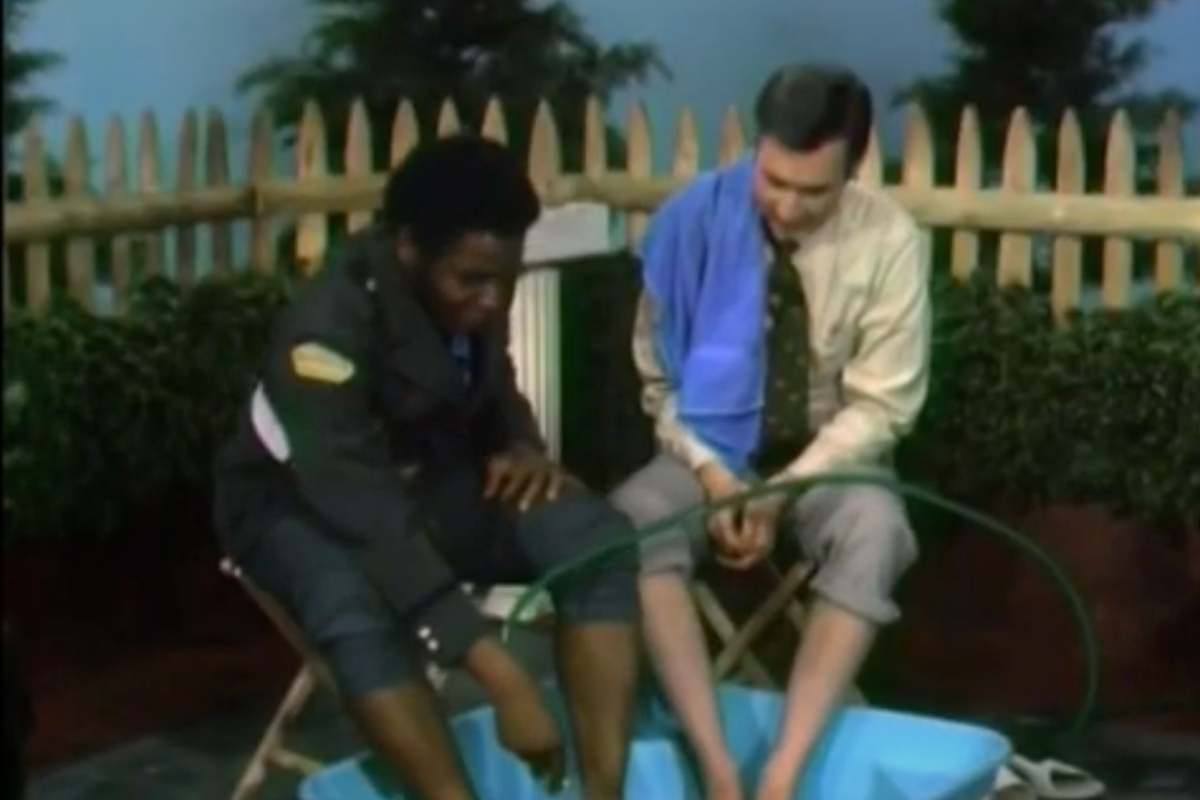 It seems we are in another time where we must remind people that being racist and an asshole is not okay. Yeah, yeah, I know, it seems like a pretty simple lesson. But hey, there are also stragglers in the back of the class. So, here’s a kid-friendly version for anyone needing that hail mary not to fail the class. This lesson is brought to you by the one and only Mr. Rogers.

Mister Rogers’ Neighborhood, as most of us know, was a children’s TV show that sought to teach children lessons about life, kindness, and being a generally good human being. The lessons usually extended beyond his world of make-believe. One episode in particular, in 1969, was released around the anniversary of Martin Luther King Jr’s death. The episode talked openly against segregation.

Mister Rogers introduced viewers to an important neighborhood member, Officer Clemmons. In real life, this guy was Dr. François S. Clemmons. Francois Clemmons was a Black man and had a reoccurring role in Rogers’ show. In one of them, on a hot day, the TV show host and police officer put their feet in a wading pool together and it was NEWS. For a frame of reference to the importance of this moment on children’s television, 1. Fred Rogers wasn’t a jerk 2. the Supreme Court had ruled that pools could no longer be segregated by race in 1969. So, this was a huge statement. In this episode, Clemmons visits Rogers who invites him to put his feet in the pool. When Clemmons told Rogers that he didn’t have a towel, Rogers offers to share his towel with his friend. Because that’s what he was trying to show- friendship and friendliness.

The scene had an affect on both the viewers, Rogers and Clemmons. Recently Clemmons spoke on it, frankly, giving his experiences on racism and some of what he experienced during his lifetime, saying, “White people didn’t want Black people to come and swim in their swimming pools,” and Fred had said, “That is absolutely ridiculous.”

Many people have been told that the episode of seeing Fred Rogers stand against racism made them think differently. One of those examples was this.

“Many people, as I’ve traveled around the country, share with me what that particular moment meant to them because he was telling them, ‘You cannot be a racist.’ And one guy … I’ll never forget, said to me, ‘When that program came on, we were actually discussing the fact that black people were inferior. And Mister Rogers cut right through it.’ … He said essentially that scene ended that argument.”

Who Is Officer Clemmons?

Clemmons was much more than a TV officer. However, for Officer Clemmons’ role, he was named of the “first African American actors to have a recurring role on children’s television show”. He details his life and experience on the show in the memoir, Clemmons: A Memoir. The book tells about his early life living in Ohio and Alabama, coming out as a gay man, and his lifelong love affair with music. He started off as a music major at Oberlin College, earned a master’s degree at Carnegie Mellon University. Clemmons’ love of music continued as he later created the Harlem Spiritual Ensemble.

In 2013, Clemmons was the Alexander Twilight Artist in Residence and directing the Martin Luther King Spiritual Choir at Middlebury College located in Vermont. He remains a supporter of his community and a creative mind. He’s currently working on another book- the target audience for the one for children. He won a Grammy Award in 1976, has sung with the Cleveland, Philadelphia, and Pittsburgh Orchestras, and with the Metropolitan Opera, as an opera singer. He has lived a life making a difference and being a light for many people, from his recurring role as Mr. Rogers’ neighbor and off-screen.

Watch: Did You Catch the Two Different Opening Credits of the Dick Van Dyke Show?