Months after having a tumor removed from her brain, Maria Menounos kicked off 2018 with a momentous occasion 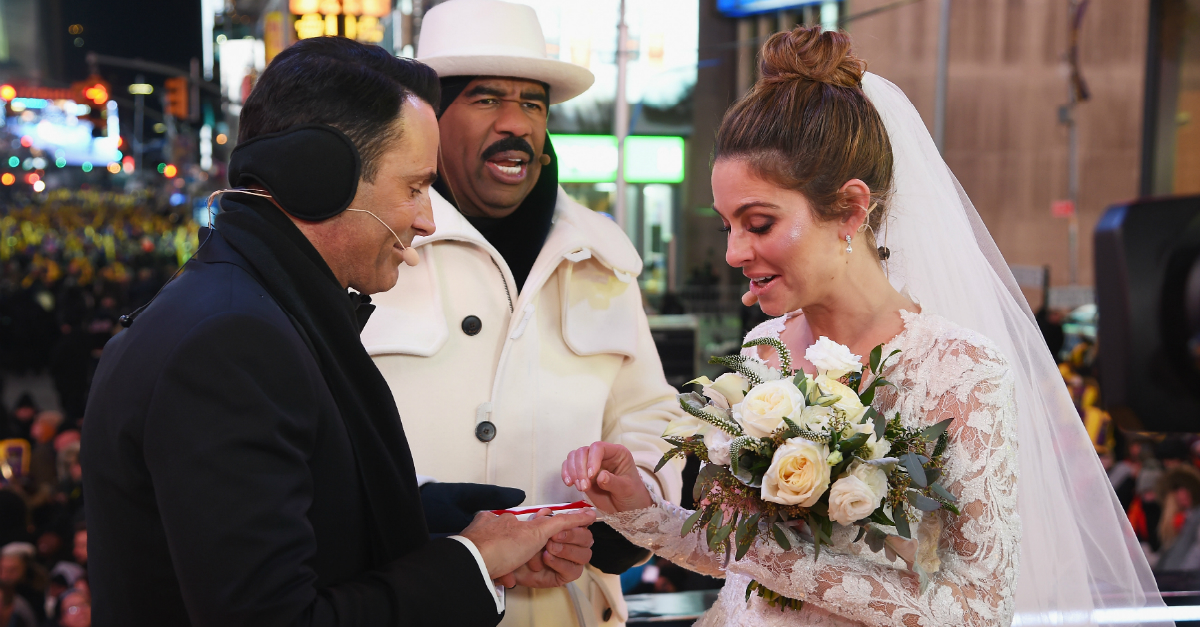 Just months after having a tumor removed from her brain, Maria Menounos kicked of 2018 with a surprise TV wedding!

Menounos — who was hosting Fox?s New Year?s Eve show — tied the knot with her boyfriend of 20 years Keven Undergaro shortly before the clock struck midnight on Sunday evening. ?I will be the coldest bride ever but the happiest,? Menounos captioned a video of her happy parents? reacting to the news of her upcoming nuptials. ?Seeing my parents happy means everything!?

Menounos’ co-host for the evening, Steve Harvey, officiated the wedding.

?When I started working on the Fox New Year?s Eve special, I sat with the producer to go over what we were planning,? Menounos told PEOPLE. ?She said, ?Unless you and Keven want to get married.? And I was like, ?Ha ha, no.? I was nervous, but I got in the car and kept thinking about it and I was like, ?Wait, this really is kind of perfect.??

?I really, truly believe that it?s taken us this long [to get married] because of the pressures of putting a wedding together,? Menounos added.

?I?m excited to be able to call her my wife,? Undergaro said. ?It?s been girlfriend for so long that it will be nice to finally, finally be able to say ?my wife.??

?Before the brain tumor, I was super type A. I was on top of everything. I would know when your birthday was and make sure you had your flowers. I was everything to everyone, but nothing to myself,? Menounos, who was diagnosed in February 2017, told Women’s Health of her ordeal late last year. ?I didn?t know it at the time, but there was no self-compassion, no self-love. I didn?t think I deserved it.?

She believed that she was so worried about those around her ? particularly her mother, who also had a brain tumor ? that she never took time to look after herself, which is why she didn?t notice her own symptoms initially.

?Do you know how many times I postponed the MRI that found my tumor? At least three times!? Menounos said. ?? But my mom?s tumor was growing, and I thought, ?I don?t have time to deal with my own issue, whatever it is.? We?re so empathetic with everyone except ourselves.?

Menounos also confessed that the toughest part of the whole situation was having to break the news to others.

?The only time I cried was when I told people,? she said.

?Would you believe me if I told you that the brain tumor is the best thing that ever happened to me?,? she claimed. ?It?s freed me from all of that anxiety of having to be perfect. You can?t control everything; leave it to God and just say, ?Okay, this is my journey.??