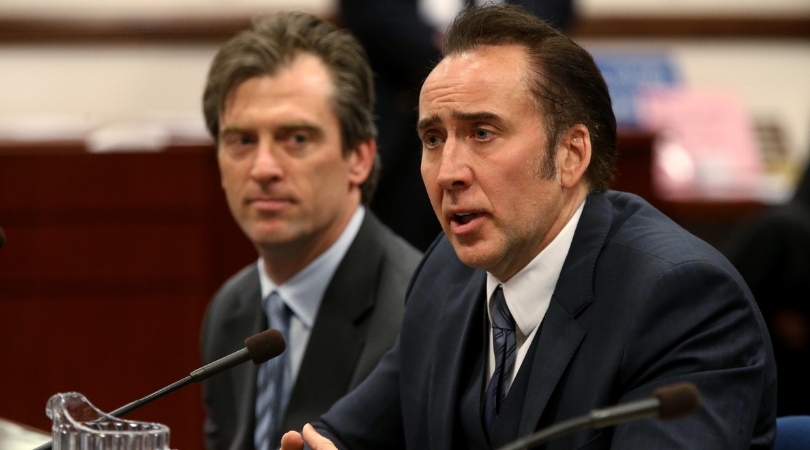 It looks like actor Nicolas Cage is in quite a pickle, after his ex-wife, who he was married to for a whopping 4 days, is demanding spousal support. Yes, it wasn’t too long ago that the couple announced they had secretly eloped, after dating for a year. Cage and Erika Koike, a makeup artist, applied for a marriage license in Vegas one Saturday night on March 23, 2019, and by Wednesday, filed for an annulment. It shouldn’t be a surprise when Nicolas Cage files for annulment.

Ah, young love, so cute, so reckless, so…expensive? According to the annulment court documents, the 55-year-old actor claims he was so hammered and passed beyond the point of intoxication, because Vegas of course, that he “reacted on impulse and without the ability to recognize or understand the full impact of his actions.” Tsk, Tsk, Tsk. Rule number one in Las Vegas, Cage, don’t get close to the church chapels especially if you’re drunk. Rookie move on your part, everyone knows that!

A drunk #NicolasCage applied for a marriage license on Saturday in Las Vegas with girlfriend #ErikaKoike and tied the knot the same day. This morning, he asked a judge to annul the marriage. He’s been married three previous times to Lisa Marie Presley, Patricia Arquette, and Alice Kim -@juceeliu

Cage then continues by saying the 4-day marriage was a fraud (once again, duh) because Koike didn’t actually disclose the full “nature and extent” of her relationship with another person. It doesn’t end there, oh no. Apparently, the makeup artist didn’t disclose to Cage in the whole year they were dating that she had a criminal background.

What is the criminal history the Ghost Rider actor is referring to? Turns out Koike has two DUIs which she pled no contest to in Los Angeles in 2008 and 2011 and a domestic violence arrest in 2006. Of course, the Hollywood actor tried to justify the annulment by saying that both had conflict in dispositions and personalities that are deep as to render the two “incompatible in marriage” as an understanding of his actions.

Koike claims that the result of his intoxication doesn’t qualify for an annulment and filed on April 19th for spousal support. According to court documents, the 34-year-old also claims that her reputation has been severely damaged by Cage and has lost out on many career opportunities. She is also asking him to pay all legal fees.

When the annulment is granted, Nicholas Cage be like.. pic.twitter.com/Fmb8DQ5D6x

I don’t know, I feel like Cage needs to take a little break from getting married. There comes a point when you just, you know, realize that maybe it isn’t for you. The actor has been married four times. Yes, four! In 1995 he married Patricia Arquette divorcing in 2001, Lisa Marie Presley from 2002 to 2004, Alice Kim from 2004 to 2016, and now Erika Koike for a total of 4 days. That’s a ton of legal fees, court documents, and old marriage licenses to keep on file. At this point, there’s probably a concrete legal document filing system just for court papers on all of Cage’s wives. But yup, can’t say I didn’t see this coming.

You were bound to get asked for money, my friend. May the odds be in your favor. It’s time to go seek that National Treasure. Or the next “Nicolas Cage’s wife.”

Editor’s note: This article was originally published on April 23, 2019.