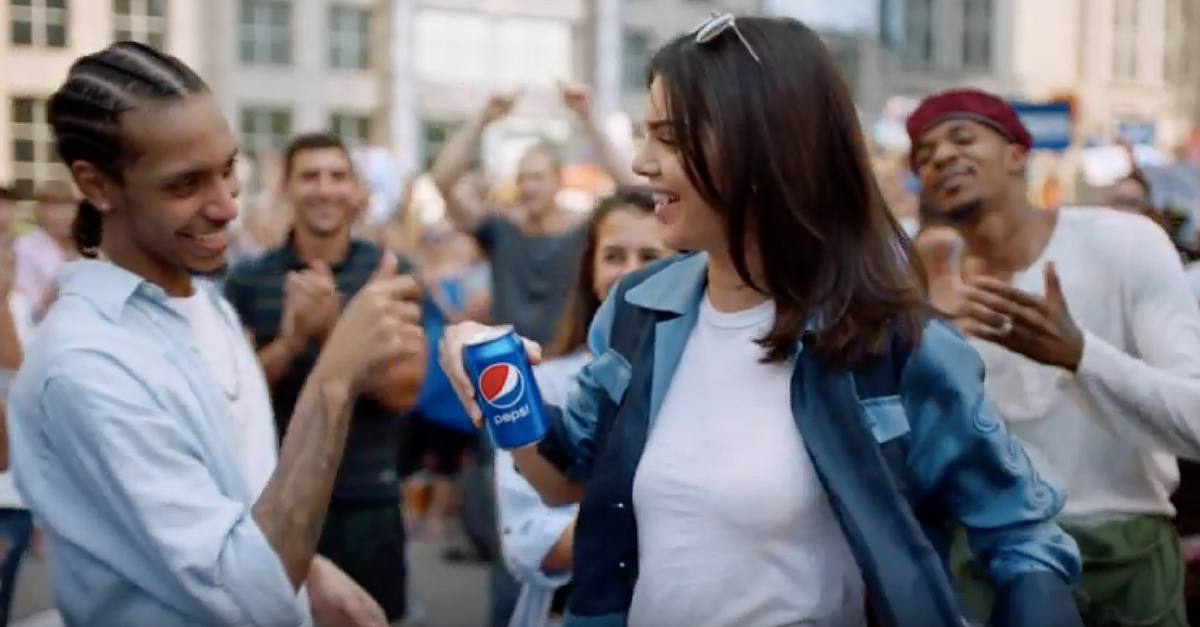 Pepsi’s new “Live for the Moments” video starring model and reality star Kendall Jenner is facing major backlash on social media, with viewers denouncing the commercial as tone deaf and an appropriation of protests around the Black Lives Matter movement.

RELATED: Just months after jewelry was stolen from Kim Kardashian West, one of her sisters had the same experience

The video begins with “Lions” by Skip Marley playing in the background. Jenner dons a blonde wig with and dark lipstick and models for a mock photoshoot as protestors walk by outside. Eventually, Jenner rips off her wig, wipes off her makeup and joins the protestors in marching for an unidentified cause. The video culminates with Jenner handing a can of Pepsi to a police officer, and the crowd of marchers cheers.

Reaction on social media has been mostly negative so far, despite Jenner’s being the first model since Cindy Crawford to have a Pepsi Global campaign. Many have called the video tone deaf, while others have accused the imagery of inappropriately mimicking a viral photo of Black Lives Matter protestor Leshia Evans, who was detained when she approached police at a demonstration in Baton Rogue, Louisiana. Evans ? who did not have a Pepsi at the ready ? was arrested, unlike Jenner.

Kendall Jenner: Can I copy off of you?

Kendall:* Looks over shoulder anyway*
Damn that. I'm getting this Pepsi money. pic.twitter.com/NUXwCZnM7p

“You know how teachers in well-intentioned, but unavoidably cringey ?90s movies starring some nice white lady tried to appeal to the youth by having her rap Shakespeare?” the Huffington Post reviewed the video. “Well, a new Pepsi ad featuring Kendall Jenner is kind of like that, but somehow even more terrible.”

The Kendall Jenner Pepsi fiasco is a perfect example of what happens when there's no black people in the room when decisions are being made.

You mean @KendallJenner handing a cop a can of Pepsi can stop police brutality and we've been holding up traffic for nothing ?

Pepsi having Kendall Jenner, a white girl, save the day in their new ad & "end racism." pic.twitter.com/1MLA7E9oqT

how nice of Kendall Jenner to stop in the middle of her photo shoot to end social injustices by giving that cop a Pepsi 😍 MLK who? Rosa who?

How I imagine the @Pepsi executives right before they decided to make this ad with Kendall Jenner. pic.twitter.com/NcQIxHJVJq

RELATED: The Kardashian sisters have one big reason to be happy that Rob and Blac Chyna broke up