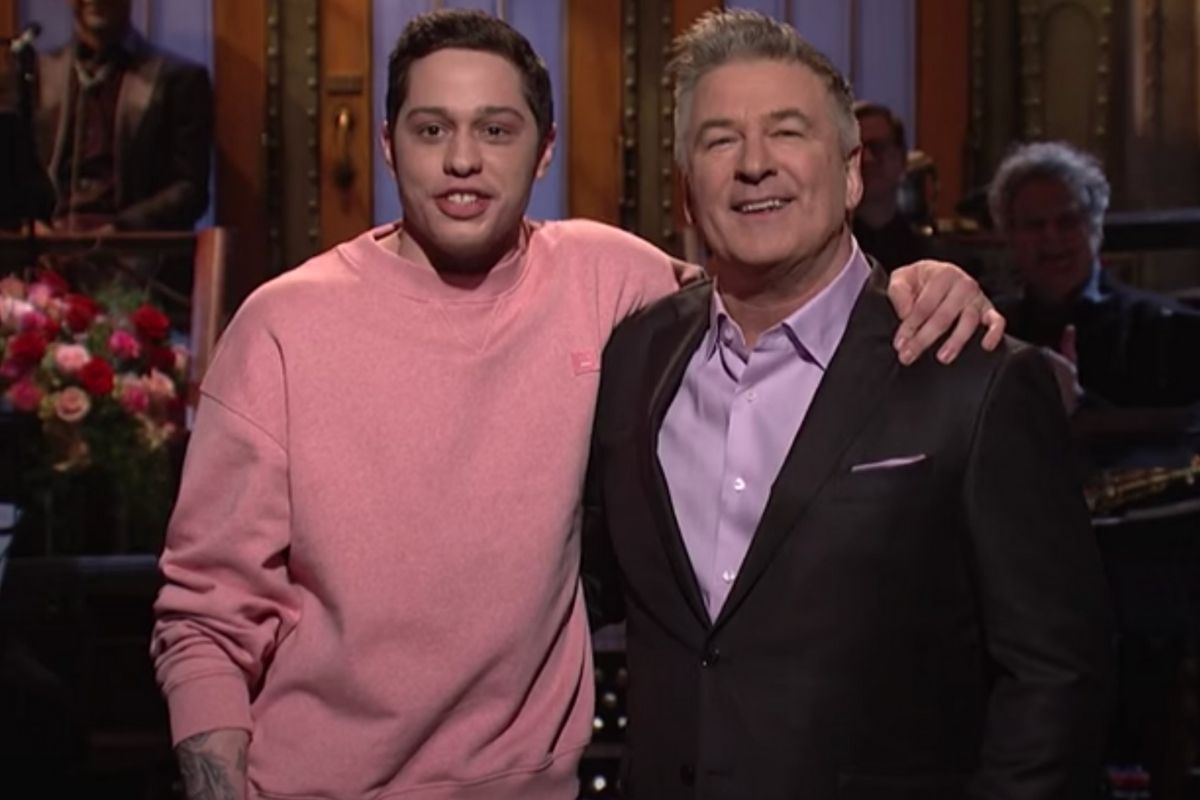 “I was on set and Alec was hosting and it was a set where I had to be shirtless, and I guess i’m ‘a little bit cut’ or whatever — there’s no nice way to say that! — so he came up to me and was like ‘What do you do?’ And i didn’t wanna be rude and just say like ‘I still have metabolism,Ii’m not in my mid-fifties, I just wake up like this.’ So to make him feel better I just said i do 100 push-ups and 100 sit-ups every day and he was like ‘Got it.’ “

Davidson can’t make it through the story without breaking into laughter — especially when employing his Batman-Esque Baldwin voice. But that’s not the end. Baldwin, being the Saturday Night Live legend that he is, went on to become a regular fixture of the cast throughout the Donald Trump presidency. So they ran into each other all the time. And with every casual bump-in, the 63-year-old actor (Baldwin is no longer in his mid-fifties, as Davidson suggested) would say to Davidson: “Hundred a day!” And, supposedly, it worked. Davidson said that Baldwin lost 100 pounds!

Aside from the obvious humor of the story, it’s pretty funny to think that what it took to make Alec Baldwin lose weight was making small talk with gawky Pete Davidson. And not, say, his marriage to fitness guru Hilaria Baldwin. Alec Baldwin announced he was pre-diabetic in 2012 and has been on a weight loss journey ever since.

Fallon then closed out the interview, discussing Pete Davidson’s upcoming role in the Suicide Squad sequel. And, earnestly, Fallon showered Davidson with praise for his work on last year’s The King of Staten Island. “You crushed it dude, you were funny in the whole thing.” Fallon said. (I couldn’t agree more.)

Longtime Hollywood celebrity Alec Baldwin is no stranger to Saturday Night Live. Channeling is his (infamous) inner anger, Baldwin was the obvious choice to regularly portray former President Donald Trump over the last few years. Baldwin won his third Emmy for the part. Plus, he already knew his way around set! Though Baldwin is not technically an SNL alum, he holds the current record for most appearances as host: Baldwin has led the show a whopping 17 times — narrowly beating out Steve Martin.

If you ask me, the King of Staten Island star should have expected to run into Baldwin often — Trump gig or not. Watch Baldwin’s most recent SNL monologue above… in which Davidson crashes completely! And ribs him (hard) over getting old. Obviously, they’ve come a long way from uncomfortable exercise chit-chat.