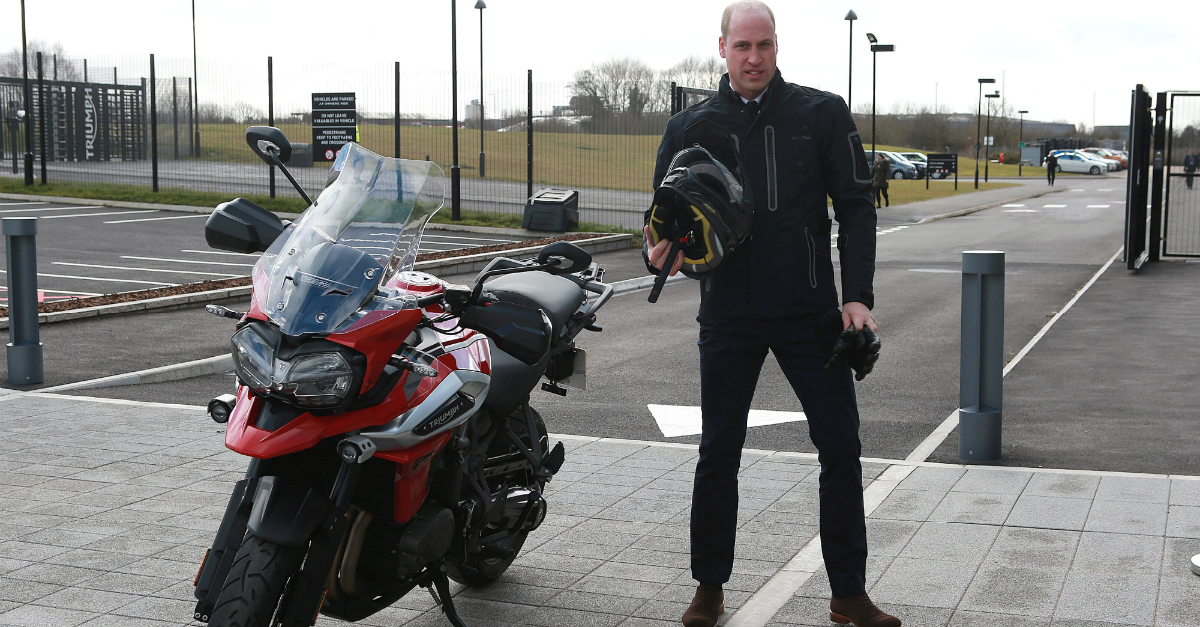 Motorcycle enthusiast Prince William, the Duke of Cambridge, recently paid a visit to the assembly line of Triumph, the largest motorcycle manufacturer in U.K., which builds around 67,000 bikes per year, according to The Daily Express.

During his visit, the 35 year old got the opportunity to test drive one of the British manufacturer’s newest models: the Triumph Tiger 1200.

William visited the factory to officially open the Triumph Motorcycles Factory Visitor Experience – a free to enter exhibition which showcases some of the brand’s greatest achievements in motorcycle design, engineering.

At one point, the Prince got up close to the very motorcycle Steve McQueen used to jump the fence of a POW camp in the ’60s war film “The Great Escape.”

“That’s amazing – to actually do the jump on this bike back then was a big risk,” William said.

William is a known motorcycle enthusiast. According to Triumph chief commercial officer Paul Stroud, the future king purchased his first bike, a Triumph Daytona 600, when he was 21, and later bought by a 675 for himself.

The Duke reportedly put his passion on the back burner a few years ago to focus on being a family man, according to Hello Magazine.

“I don’t know what it is about bikes, but I’ve always had a passion for motorbikes ever since I was very small,” he once said. “I used to do a lot of go-karting when I was younger and then after that I went on to quadbikes and eventually motorbikes.”

“It does help being anonymous with my motorcycle helmet on because it does enable me to relax,” he added. “But I just enjoy everything about motorbikes and the camaraderie that comes with it.”

After the visit, the official Instagram account of Kensington Palace shared an image of William astride a gorgeous vintage Triumph.

Today The Duke of Cambridge visited Triumph Motorcycles and the HORIBA MIRA Technology Park to learn more about world-class British vehicle manufacture and research in the East Midlands.

RELATED: Dressing like Kate Middleton and Meghan Markle is more affordable than you think