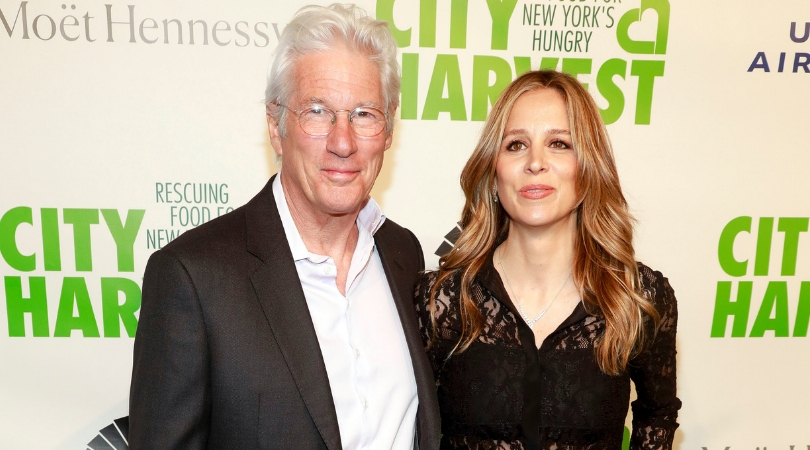 Editor’s Note: This article was originally published on November 6, 2019. It was updated on April 23, 2020 after Richard Gere’s wife, Alejandra Silva, gave birth to their second child together.

Richard Gere’s wife, Alejandra Silva, just gave birth to a healthy baby boy. After getting married in April 2018, they announced that she was pregnant with her first child that following August. Then, back in November 2019, the couple announced that Silva was pregnant with their second child. Now in the midst of quarantine, she has given birth, and the family is bonding with the newborn at their ranch in Pound Ridge, New York, the place where the couple had exchanged vows.

Richard Gere, 70-years-old, and Alejandra Silva, 37-years-old, both have children from previous marriages. With his ex-wife, Carey Lovell, the Pretty Woman star has a 20-year-old son, Homer. Silva, the the daughter of a former Real Madrid vice-president, shares 7-year-old Albert with businessman Govind Friedland. However, both Gere and Silva have made it very clear how happy and in love they are, always speaking highly of each other.

Congratulations to the happy couple for a healthy newborn during these times!

It looks like congratulations are in order for actor Richard Gere and wife Alejandra Silva, who announced they are expecting baby number two! Silva, who is 36, previously gave birth roughly nine months ago to the couple’s first child together, Alexander, in February 2019. Baby Alexander was born in New York, joining Gere’s 19-year-old son Homer James Jigme Gere whom he shares with Carey Lowell and Silva’s 6-year-old son Albert who she shares with Govind Friedland.

According to People, the 70-year-old and Silva are ecstatic to welcome back-to-back babies. News broke out about the publicist’s first pregnancy with the Pretty Woman star back in August 2018. She confirmed they were expecting the following month with a baby bump photo on her Instagram. The couple secretly tied the knot back in April 2018.

Richard Gere is joining the likes of Charlie Chaplin, Robert DeNiro, Steve Martin, and Clint Eastwood with these new reports of his impending fatherhood. That’s right, all of those celebrities had children when they were over the age of 65 and Richard Gere will be 69 when his child with new wife Alejandra Silva is born next year. Gere turns 69 on August 31, making this for a real birthday month surprise.

The announcement came after the Spanish outlet ABC reported the news, though Gere’s rep has not confirmed the reports to multiple press outlets in the US. Gere married Silva, 35, in April 2018 after the pair dated for four years. He has an 18-year-old son, Homer, from his marriage to his second wife, actress Carey Lowell. Gere’s first marriage was to supermodel Cindy Crawford from 1991 to 1995. Silva has a 5-year-old son, Alberto, from her first marriage to Govind Friedland.

While it’s unsure where the pair will raise the child, in Silva’s native Spain or New York City, it’s clear that they’re crazy for each other despite the 33-year age gap. Silva told Hola magazine in September 2016, two years before tying the knot, that, “Richard has been my hero in real life. I was a little lost, without light, and meeting him gave sense to my life.”

So back to the famous old dad club in Hollywood! Where does the Pretty Woman star shake out among this list of distinguished older dads who were too sexy to stop procreating?

Chaplin’s last child was born was he was the ripe ol’ age of 73 years old. Like Gere, he shared a similar age gap with his wife, Oona O’Neil, who was 37 years old at the time. DeNiro was 68 years old when his daughter Helen Grace was born in 2011, though he and his second wife, Grace Hightower, welcomed their daughter via surrogate.

Steve Martin was 67 when he became a dad for the very first time in 2012 with the birth of his daughter with Anne Stringfield. Clint Eastwood was 66 when he and his second wife Dina Ruiz welcomed their only child together. So it looks like Gere is in good company if this report is confirmed!