Ronald Reagan was more than just your average smoker. Long before he was president, the former actor was also a paid cigarette model, posing in print ads for Chesterfields. But when his brother developed cancer of the larynx, this pipe-smoking politician decided it was time to quit nicotine. Needing some kind of substitute, Reagan began popping jelly beans addictively during his first gubernatorial run in 1966.

The governor of California then became associated with jelly beans, a quirk which continued on his road to the White House. It was really morning in America for Jelly Belly — Reagan’s preferred brand — as the modest candy maker found the kind of publicity that money couldn’t buy. Commemorating this special relationship, the Jelly Belly factory still has a shrine commemorating our 40th president.

From Cigarettes to Jelly Beans! 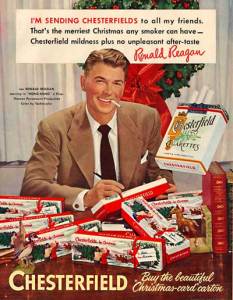 Jelly Belly Candy Company, formerly known as Herman Goelitz Candy Company, is a candy manufacturer most famous for producing jelly beans in fantastic flavors. The company has historic roots in both California and the Chicagoland area. Founder Gustav Goelitz emigrated to the United States in 1866 to begin his business in Illinois. Throughout the late 1800s, The Goelitz Confectionery Company sold mainly candy corn, which was a new invention at the time.

In 1904, the company relocated to North Chicago in 1913. Ten years later, Gustav’s son Herman opened a West Coast division in Oakland, California which expanded into jell candies: jelly beans and gummy bears. The Golelitz “Mini Jelly Bean” was something like a prototype for the Jelly Belly we are familiar with today. The Mini Jelly Bean had natural flavor completely infused, as opposed to just in the outer shell (as was common with jelly beans at the time).

Ronald Reagan became hooked on Mini Jelly Beans and received shipments of them from the Goelitz Candy Company throughout his two terms as mayor. In fact, the Jelly Belly bean we love today had not even been invented yet. 1976, In 1976, David Klein and Herman Rowland worked to create a new jelly bean form using natural purees. This allowed for surprising different flavors, like Tangerine, Green Apple, Cream Soda, and Root Beer, which were among the original batches.

(Today detailed flavor profiles like Buttered Popcorn, Piña Colada, and Strawberry Daiquiri are crowd favorites.) Klein came up with the name “Jelly Belly” as a tribute to blues musician Lead Belly. He also created the now-iconic red and yellow logo which marks any bag of true Jelly Bellys. Before long, the concept of “Jelly Belly” defined the company.

Jelly Belly continued to operate in both California and the Midwest, with factories open for family tours in Fairfield, California and Pleasant Prairie, Wisconsin. Sadly, this year the Pleasant Prairie location (which I grew up visiting) closed its doors. A new plant has opened, true to the Goelitz roots, in North Chicago but it will not be open to the public like Pleasant Prairie so famously was. And this closure got many locals talking, and wondering, about whatever happened to the portraits of Ronald Reagan made entirely out of jelly beans.

While governor of California — before the invention of Jelly Belly — Ronald Regan was chomping on (the now archaic) Mini Jelly Beans. “It’s gotten to the point…where we can hardly start a meeting or make a decision without passing around a jar of jelly beans,” He once told the Herman Goelitz Candy Company. “We owe you a special measure of thanks for helping keep our state government running smoothly.”

But by the time Reagan entered the White House in 1981, a new variety of chewy, flavorful goodness was sweeping the nation. And Reagan ate it up. This candy became synonymous with Reagan’s rise to power, and like the man himself, seemed so appealing, so shiny on the outside. Advertised as gourmet jelly beans, TIME Magazine called Jelly Belly “The type most esteemed by the President is brand-named Jelly Belly, which—addicts vow—is to the ordinary jelly bean what foie gras is to liverwurst.”

But the jelly beans didn’t always make for such a media treat. According to James Richardson’s Willie Brown: A Biography, Brown got into an impassioned fight with Governor Reagan. The famed California Assemblyman then angrily “thrust his hand into Reagan’s legendary jelly bean jar and then declared that he knew that neither Reagan nor his staff would eat the jelly beans because his black hand had been inside.” This conflict, which occurred during the 1970s, now seems like an apt reminder of just what a public persona (or gimmick) seeks to cover. The idea of a lighthearted, candy-loving official serves well in the public eye, but in the end, it’s always about politics. Though the CEO of Jelly Belly will disagree. (“I think it’s just something fun and lighthearted,” she told Atlas Obscura.) The Jelly Belly factory in Fairfield is plastered with Reagan memorabilia.

Reagan as a Jelly Bean!

By the time Ronald Reagan won the 1980 election, Jelly Belly’s business was booming. Needing a boatload of jelly beans for Reagan’s inauguration in Washington D.C., the Herman Goelitz Candy Company had to manufacture an entirely new flavor — blueberry — in order to present that patriotic trifecta so integral to the Reagan platform. The beans used were Very Cherry for red, Coconut for white, and of course, the novel Blueberry blue jelly beans which are now one of the most popular flavors.

The Jelly Belly fervor continued into President Ronald Reagan‘s first term, as both the Oval Office and Air Force One remained completely stocked with the sugary treat. Jelly Belly even developed a special jar with the presidential seal, in which the 720 monthly bags of Jelly Belly jelly beans were served at the White House. Reagan once said, “You can tell a lot about a fella’s character by whether he picks out all of one color or just grabs a handful.” Reagan himself was a licorice man, preferring to select the single black beans from a colorful bowl.

But during his final year in office, Ronald Reagan had a change of heart. In 1988, he began requesting custom boxes of M&Ms from the Mars Company and ended his tenure as president on a chocolate kick. But this confectionary betrayal could not overshadow the decades of Reagan’s jelly bean obsession. Perhaps the most innocuous aspect of Reagan’s legacy is indeed his propensity for the Jelly Belly specialty. And this presidential habit is noted through some impressive pieces of multi-media candy art. A large-scale (and impressively shaded) portrait of the former president can be seen at the Ronald Reagan Presidential Library in Simi Valley, California. The piece, rendered by artist Peter Rocha, features 10,000 jelly beans.

But that’s not the only sugar-coated representation. Many portraits of Ronald Reagan have been constructed from jelly beans finding display at both Jelly Belly facilities over the years. With the closure of the Pleasant Prairie, Wisconsin plant it seems that the site in Fairfield, California will remain the primary home of these patriotic mosaics. Check them out below or visit the Jelly Belly factory at 1 Jelly Belly Lane in Fairfield, California.