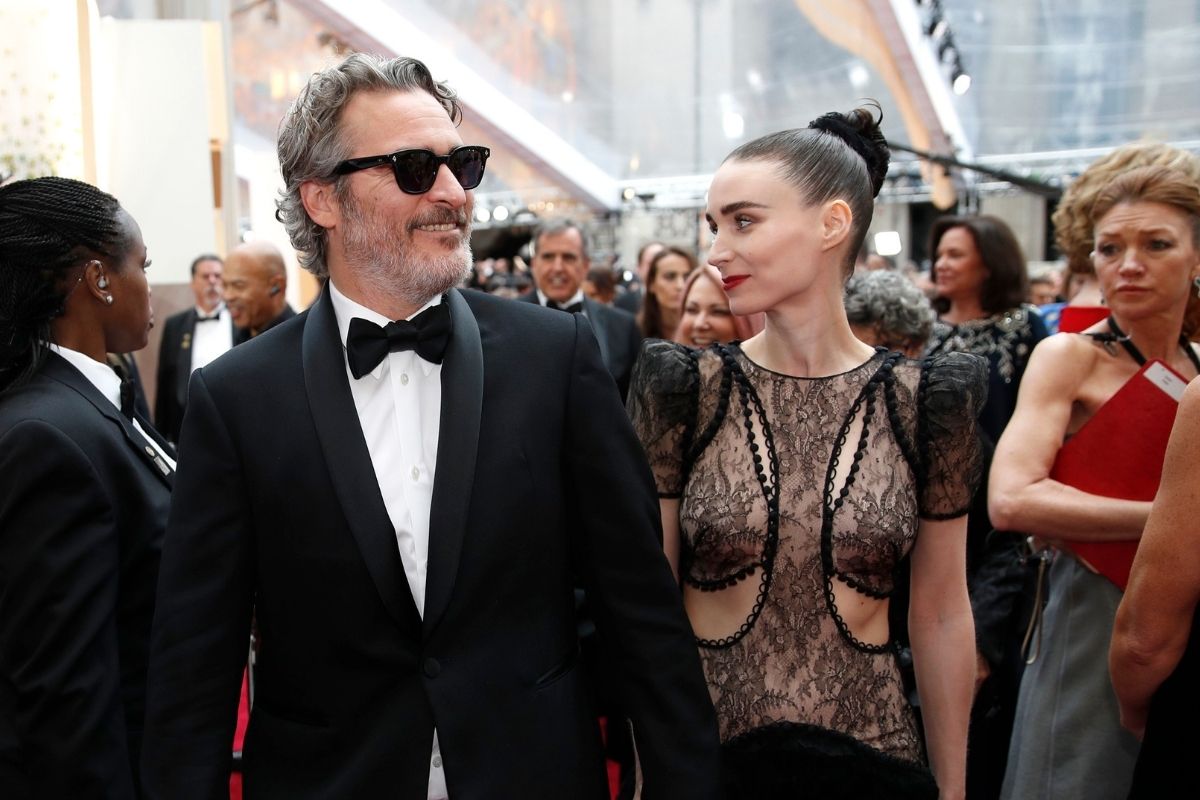 Actors Joaquin Phoenix and Rooney Mara aren’t your typical Hollywood couple. For one thing, the celebs have virtually zero social media presence. For another, they’re gung-ho animal rights activists and vegans who have gone as far as to march with the corpses of animals who have died in factory farms that mass-produce meat and poultry for human consumption. And they’re fierce, vocal advocates of fair immigration policies.

How did these passionate, good-looking, under-the-radar couple of oddballs find each other? Let’s take a look back at the nearly decade-old relationship between the star of The Joker and the actress in The Girl with the Dragon Tattoo:

Our story starts in 2012 when Phoenix and Mara starred in the Spike Jonze film, Her. Phoenix starred as a man who becomes romantically involved with a computer operating system; Mara played his ex-wife.  While they were filming, Phoenix was convinced Mara hated him, but would later find out that she was just shy.

The actors would be reunited on the set of Mary Magdalene in 2016. Mara starred as the title role alongside her co-star Phoneix, who played Jesus. By the time the shooting for the movie was complete, the two had started dating. Phoenix and Mara didn’t make their red carpet debut as a couple in public until the 2017 Cannes Film Festival when Phoenix won the Best Actor award for You Were Never Really Here.

Even though Mara and Phoenix seemed unlikely candidates for getting hitched because they thought “marriage is too mainstream“. Phoenix and Mara got engaged in 2019 after three years of dating. 2019 was also the year they famously protested with dead birds in the National Animal Rights Day march. The same year, the two were spotted at the Venice Film Festival and the premiere of The Joker.

Also in 2019, Phoenix thanked Mara with a kind-weird-but-kinda-adorable mention in his Tribute Actor award acceptance speech at the Toronto International Film Festival. “One last thing,” he announced. “Somewhere here, I don’t know where, is a filthy dragon, and I want to rip its wings off and fasten a blanket and sleep with it forever. I love you. Thank you.”

Before COVID-19 had gripped the nation, Mara and Phoenix appeared together at the 2020 Golden Globes, where Phoenix was awarded Best Actor. After the awards ceremony in January, the duo was spotted along with Rooney’s sister Kate Mara at “Fonda’s Fire Drill Friday” fossil fuel protest outside city hall in downtown Los Angeles in February.

In September 2020, it was revealed that Mara and Phoenix had welcomed their first child: a baby boy named River. The news was shared not by the couple but by director Victor Kossakovsky, whose film Gunda was executive-produced by Phoenix. At the Zurich Film Festival, the director announced that his executive produce wasn’t present because he “just got a baby… a beautiful son”.  The director explained that the baby would be called River after Phoenix’s late brother, who died of a drug overdose in 1993. Phoenix memorably gave an emotional speech for his brother when he won the Oscar for Best Actor for his performance as The Joker.

The couple would later talk about their son in an op-ed for People when they addressed the recent migrant children crisis. “As new parents, it’s unbearable to imagine what it would feel like to have our child taken away from us for a day, let alone years,” they wrote. “But that’s the very situation those 545 children and their parents have been living through. As Americans, it’s our responsibility to continue paying attention to the plight of these families and get answers for why they still have not been located.”