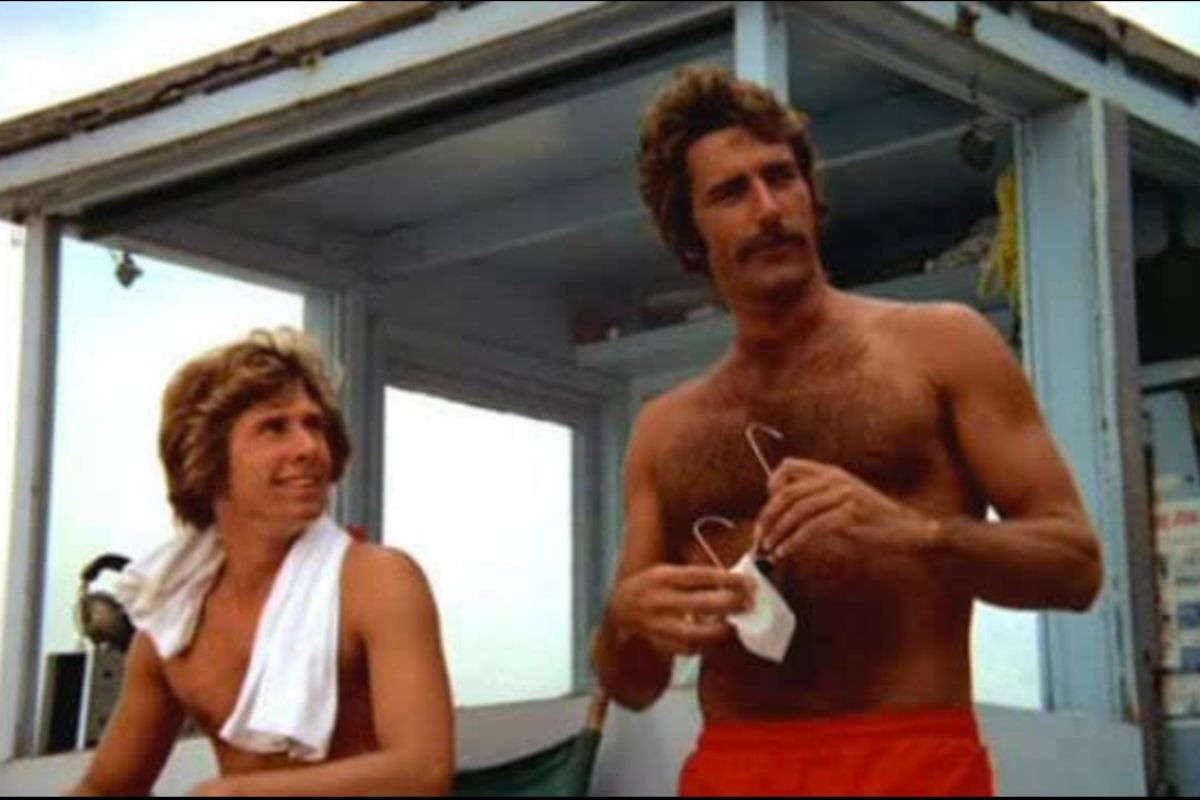 Sam Elliott is having a contemporary comeback. He starred in The Ranch on Netflix beginning in 2015 and earned his first (!) Oscar nomination in 2018 for A Star Is Born. (Personally, I love him the SJP-Hugh Grant rom-com Did You Hear About the Morgans? Check it out, seriously.) As his familiar, deep twang and unmistakable mustache have re-entered the popular culture, many viewers remember this character actor fondly. And while it’s easy to imagine he got his start in Westerns, Sam Elliott’s substantial Hollywood breakthrough came in the forgotten 1976 beach drama Lifeguard.

Sam Elliott was born in Sacramento, California, and spent his teenage years in Portland, Oregon. This makes his molasses-slow drawl something of a unique mystery. Elliott moved to Los Angeles during the late ’60s to pursue acting. In 1969, he made a minor appearance in Butch Cassidy and the Sundance Kid as a card player. Over the next decade, Elliott slowly became recognizable for various supporting roles; Lifeguard marked his first lead.

Sam Elliott married the actress Katharine Ross in 1984. He is her fifth husband. Ross had starred in Butch Cassidy and the Sundance Kid, although the two did not connect until 1978 on the set of The Legacy. Due to his and Ross’s honeymoon, Elliot nearly passed on his role, opposite Cher, in the remarkable Mask! (Thankfully he did not. Ross recognized the opportunity and goaded her husband to return for the screen test.) The couple shares one child, daughter Cleo Rose Elliott. Cleo is now a musician and recently made news over a particularly nasty fight with her mother… Ross and Elliott live on their ranch in Malibu and also maintain properties in Elliott’s home state of Oregon.

In case you don’t remember this overlooked gem, think Baywatch with heart. Lifeguard follows the story of Rick, played by Sam Elliot, who is a 32-year-old lifeguard at a Southern California beach. Rick begins to question his life choices and playboy ways after a fifteen-year high school reunion. At the reunion, Rick runs into Cathy, played by Anne Archer, his high-school sweetheart. Rekindling their romance, Cathy wants Rick to mature and look beyond the beach. So when an old classmate, played by Stephen Young, offers Rick a job as a Porsche salesman, Cathy encourages him to take it. But he’s torn! Because Rick must also rebuff the advances of local teen Wendy, played Kathleen Quinlan.

Lifeguard, based on a screenplay by Ron Koslow, was directed by Daniel Petrie and produced by Ted Mann. Production went fairly smoothly. Sam Elliott had worked as a lifeguard for some time, and both of his parents had been lifeguards too! So stepping into the world of Rick was natural for the thoughtful actor. Most lifeguard tower scenes were filmed at Los Angeles’ aptly-called “Burnout” towers. Perhaps surprisingly, Lifeguard was not a box office (nor critical) success. However, the film has gained something of a cult following in the decades since.

Writing in 2012 for the New York Times, filmmaker David Finkel said, “If you weren’t 17 yourself then and bored and oversexed, you probably didn’t see [Lifeguard].” And yet the apparent flop made an impact on the Devil Wears Prada director. He writes of the “cliche-ridden” summer flick: “I remember Lifeguard all these years later, and that counts for something, doesn’t it? Isn’t that what art is, really? A work that makes you see the world differently, that answers questions you didn’t know you had, that perfectly captures a time and a place, that inspires you?” So if you’d like to reimmerse yourself in the ease of 1976 — or just can’t get enough of the mustachioed main man — check out this sun-soaked character study.

WATCH: Sam Elliott’s Wife Filed a Restraining Order Against Their Own Daughter