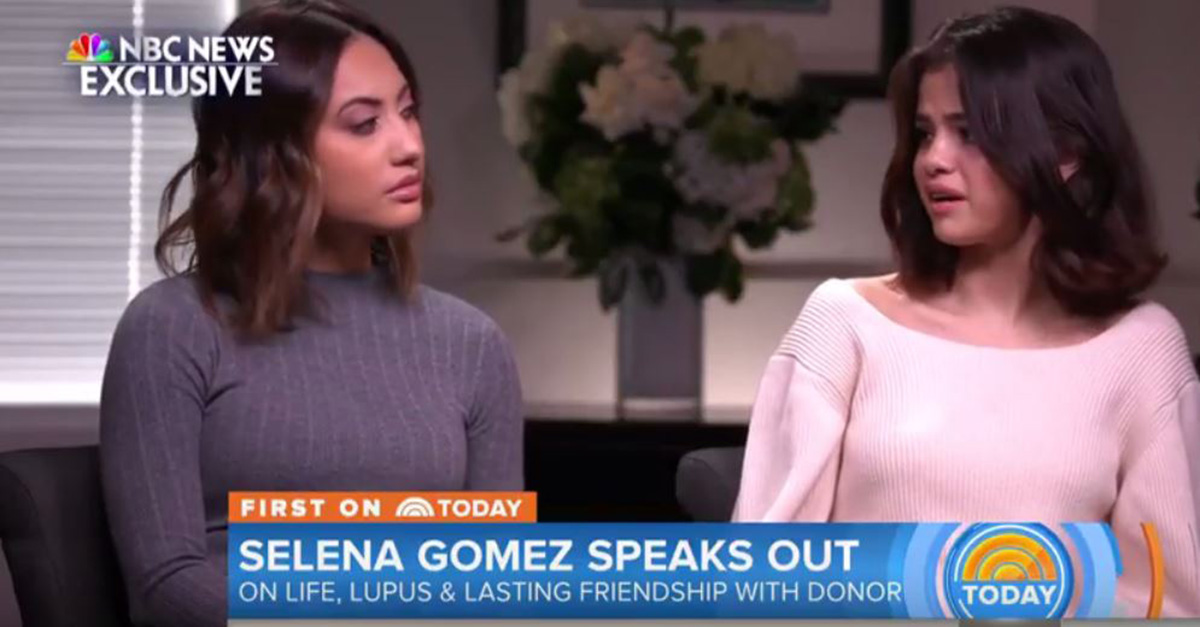 Singer Selena Gomez and her best friend and kidney donor Francia Raisa sat down for the first interview since they underwent a transplant this summer on “TODAY.”

Gomez opened up about her series of health issues ahead of the surgery steaming from her Lupus diagnosis and Raisa said seeing her roommate and dear friend in unbearable pain was difficult to watch.

“She couldn’t open a water bottle one day,” Raisa told Savannah Guthrie. “She chucked it and she started crying. I said, ‘What’s wrong?’ and that’s when she told me. She goes, ‘I don’t know what to do. The [donor] list is seven to 10 years long.'”

Raisa said she wanted to get tested to see if she was a match but Gomez was hesitant; she couldn’t imagine asking a friend to do something like that for her.

“I didn’t want to ask a single person in my life. The thought of asking somebody to do that was really difficult for me,” Gomez said holding back tears. “Let alone somebody wanting to volunteer, it’s incredibly difficult to find a match.”

RELATED: Selena Gomez thanks her best friend for saving her life with a kidney donation

Raisa insisted and went through the blood and urine tests as well as psychological and physical evaluations to make sure she was a fit candidate. A process that typically takes about 6 months was finished in a day, according to Raisa.

In the end, she was a match. The night before the surgery, the friends braided their hair and shared an extravagant meal. Raisa’s surgery was first and when the removal of the kidney was successful, it was Gomez’s turn.

Gomez told Guthrie that she underwent an additional 6-hour surgery because her kidney “flipped.” A standard kidney transplant is only 2 hours.

Both surgeries were successful in the end but it is still a long road to recovery. The friends were on bed rest together and leaned on each other for support.

“I think one of the most humbling experiences was needing help to put on underwear. We couldn’t take showers by ourselves. It was a really brutal process,” Raisa said.

Months later, both friends are feeling better than ever and Gomez thanks her friend for literally saving her life.

“I guess I got to the point where it was really, kind of, life or death. It’s really hard to think about or even swallow,” she said, adding that since the surgery, many of her symptoms have gone away. They both hope that by sharing their story, they will help others and raise awareness.