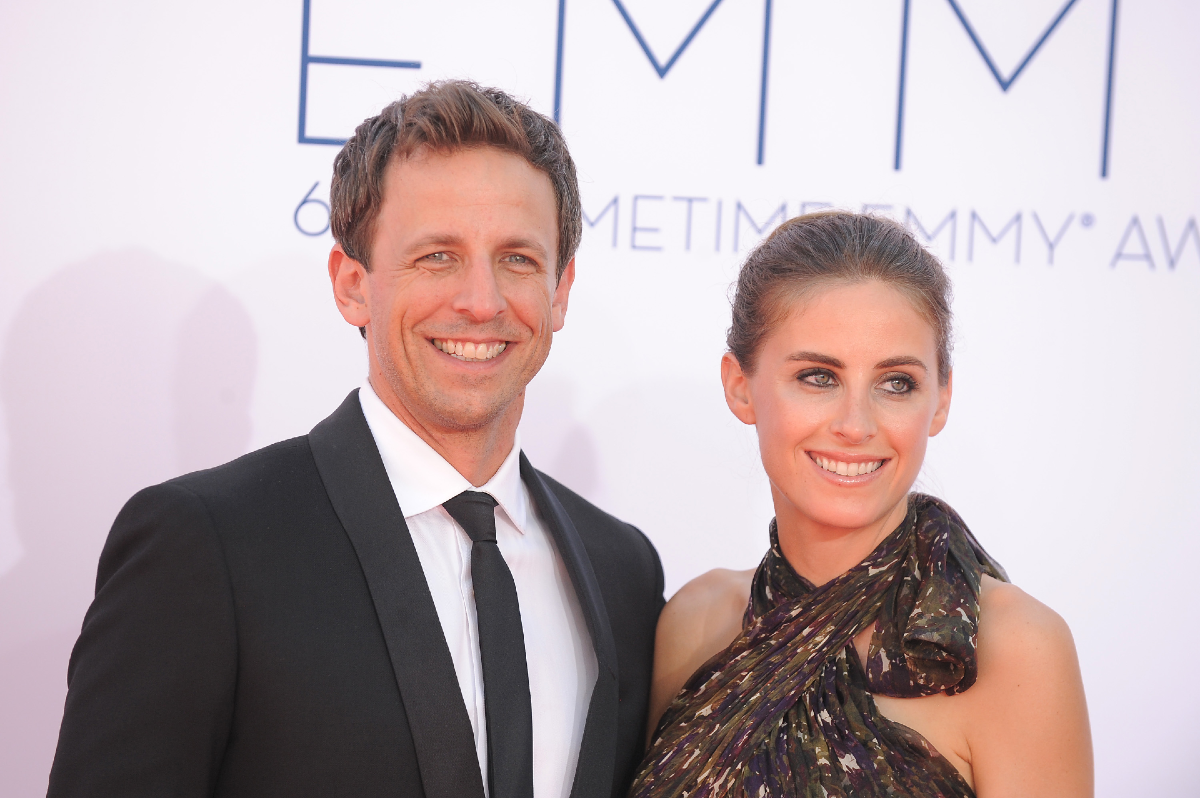 Seth Meyers insists it was love at “pretty much” first sight when he met his future wife Alexi Ashe. “I had a sense she was the closest I’d ever met to someone who I could see myself with. Pretty much right away,” he remembered in an interview with Your Tango. Read on to hear the rest of their love story and get to know the lady who holds the late-night host’s heart.

Seth and Alexi: A Love Story

Seth and Alexi met actor and comedian Chris Kattan’s wedding to Sunshine Tutt in June 2008. Ashe attended the wedding as a guest of her sister, Ariel Ashe, a designer on Saturday Night Live. At the time, Meyers was a writer for SNL. After five years of dating, Meyers proposed to his future wife. Meyers remembered his proposal in an interview with People. ?I tied [the ring] in a bow around our dog?s collar,” the comedian remembered. “I just had to sit there looking at the dog. I was like, ?The dog?s going to eat the ring.? (Don’t worry, the dog was cool and the proposal went as planned.)

On September 1, 2013, Seth Meyers married Alexi Ashe. The ceremony and reception were held at Chickenmoo Farm in Martha’s Vineyard. The bride and Ariel, Ashe’s sister, both wore a Carolina Herrera gown. Seth and his brother Josh both donned Ralph Lauren Black Label suits. The rabbi who officiated the ceremony wore a Paul Klee tie that he purchased at a museum gift store. Because Alexi and the Ashe family are all super big country music fans, Brad Paisley showed up as a surprise guest and played the song “Then” for Seth and Alexi’s first dance.

Three years after tying the not, the couple welcomed their first child,  a son named Ashe Olsen Meyers. As the story goes, Alexi rode to New York’s Lenox Hill Hospital in an Uber, arriving 20 minutes before giving birth. The birth of their second child was even more of a close call. As Seth remembered in an episode of Late Night with Seth Meyers, Alexi accidentally ended up giving birth to her second son Axel in the lobby of their apartment building.

?I looked at my wife, and the only way I can describe how my wife looked, was she looked like someone who was hiding a baby in a pair of sweatpants,” Meyers said. “We undressed her and the baby was just out. The head of the baby was out. I called 911 ? this is how fast it happened ? I called 911 and over the course of a minute conversation, I basically said, ?We?re about to have a baby, we?re having a baby, we had a baby.?

The New York City fire department arrived at the apartment with barely enough time to cut the umbilical cord. Other people living in the apartment lent the couple towels to keep the baby warm. The baby boy was named Axel Strahl Meyers in honor of Alexi’s grandparents, who met after being liberated from a concentration camp after the Holocaust.

Alexi Ashe, a native of New Mexico, moved to Los Angeles after high school to study political science and government at Occidental College. After working as a research assistant at the LA City Attorney’s Office, Alexi went back to school to pursue a Doctorate in International Human Rights at Southwestern University School of Law. Today, Alexi works as a human rights attorney for Sanctuary for Families and co-chairs the New York State Anti-Trafficking Coalition. Because of her dedication to defending human rights and ending human trafficking, Alexi is considered a New Abolitionist.

Seth admires his wife greatly for maintaining a positive outlook on the world even as she deals with serious crimes as a human rights lawyer. ?But you know, my wife works at the Brooklyn D.A.?s Office,” he told YourTango. “She?s dealing in a far darker world than I am. And she manages to come home, and still be bright-eyed and positive. So I have to do the same.?

Watch: Jimmy Kimmel Fell for and Married the Head Writer of His Show