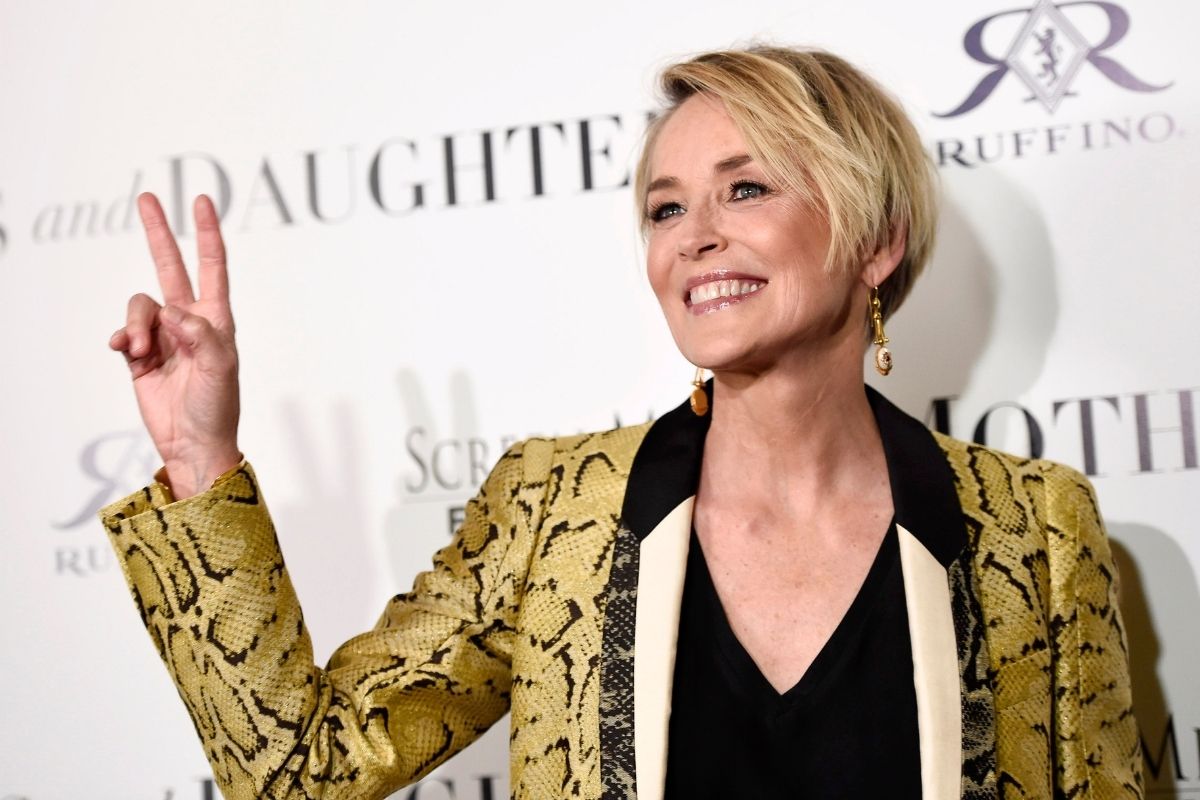 Sharon Stone‘s new memoir, The Beauty of Living Twice — out now from Alfred A. Knopf –traces the unconventional celebrity’s wild life through broken memories and fantastic anecdotes. Growing up in Pennsylvania, Stone was both a gifted child (with an IQ of 154) and a decorated beauty queen. But her colorful childhood also included devastating sexual abuse as Stone and her sister were both molested by their grandfather.

In her new book, the fabulous 63-year-old movie star tells her own story, for the first time, with illuminating candor. There are many personal secrets, and shocking facts, revealed within the pages of The Beauty of Living Twice. Here’s a list of just a few, from the juicy new pandemic read.

1. Sharon Stone was once struck by lightning

While filling her iron with water from a well near her home, the well was struck by lightning! The lightning then. came up through the water and electrocuted Stone. And that’s just one of many near-death experiences for Sharon Stone.

In The Beauty of Living Twice, she also describes nearly getting decapitated after being dragged while riding a horse: “My neck was hanging open, wet and ripped from one ear to the other,” she writes vividly of the accident. She was quickly taken to the hospital to get stitched up… and that was not the last emergency operation Stone would receive.

2. A brain hemorrhage in 2001 left Stone with a one-percent chance of survival

Though Stone’s early-aughts health crisis was national news, she’s opened up about the experience now in detail that is both painful and inspiring. What occurred was a massive brain hemorrhage followed by a stroke. In the wake of the disaster, Stone’s husband Phil Bronstein left her; a nasty custody battle over their son ensued. Throughout that time, she did not work for two years and it took seven years to fully recover physically. She re-learned to walk, talk, read, and eventually, entered the spotlight again. This process led to Stone’s new outlook, the impetus behind this freshly assembled survivor’s narrative.

3. She used to be a pickpocket!

“Oh, I could put the entire dinner service in your bag while talking to you,” Sharon Stone writes in The Beauty of Living Twice.

4. Stone had a messy abortion in high school

Stone had a rough adolescence. She and her sister were abused from childhood on by their grandfather, a pattern that ended only with his death during her teen years. Additionally, Stone’s prom date was killed in a drunk driving accident… and she also had a wrenching abortion. After crossing state lines to receive the service, the young Stone “was bleeding all over the place and far worse than I should have been, but this was a secret and I had no one to tell. So I stayed in my room and bled for days. I was weak and scared and then just weak.” It’s a heartbreaking story.

“The ones who have threatened to fire me if I didn’t put out… [are] less violent trespassers of my personal space.”

— Sharon Stone in The Beauty of Living Twice

Sharon Stone’s on-screen came debut came through a bit part Woody Allen‘s Stardust Memories in 1980. (The two would later collaborate again, as romantic interests in one of my all-time favorite movies: Antz.) Since then, she’s starred in contemporary classics like Paul Verhoeven’s Total Recall and Martin Scorsese‘s Casino for which she earned both an Oscar nom and a Golden Globe. And it goes without saying that in 1992, Stone became an international sex symbol of her daring (open-legged) role in Verhoeven’s Basic Instinct. With such a slamming resume, you might expect that Stone should have no trouble finding work. But the Los Angeles environment illustrated in The Beauty of Living Twice is, as Stone puts it, “Play ball or get off the field, girl.”

First off, Stone says that she was not informed, by Verhoeven or anyone, of the sensationalized up-skirt shot in Basic Instinct until she saw the final cut of the film at Cannes. She also describes verbal harassment from one of the Basic Instinct producers, constantly reminding her that was she was (apparently) the studio’s 13th choice to play the steamy Catherine Tramell, an unnamed director who “who wouldn’t direct me because I refused to sit in his lap to take direction.”

Of an anonymous producer, Stone also revealed: “He had malted milk balls in a little milk-carton-type container under his arm with the spout open. He walked back and forth in his office with the balls falling out of the spout and rolling all over the wood floor as he explained to me why I should f***k my co-star so that we could have on-screen chemistry.” The characterization of these male forces in The Beauty of Living Twice is blunt and unforgiving. And though Stone has seemingly risen above the trauma in her past, it’s clear she will remain outspoken regarding her exploitative experiences.