This ‘Game of Thrones’ Star Has an Instagram Dedicated to Sausages 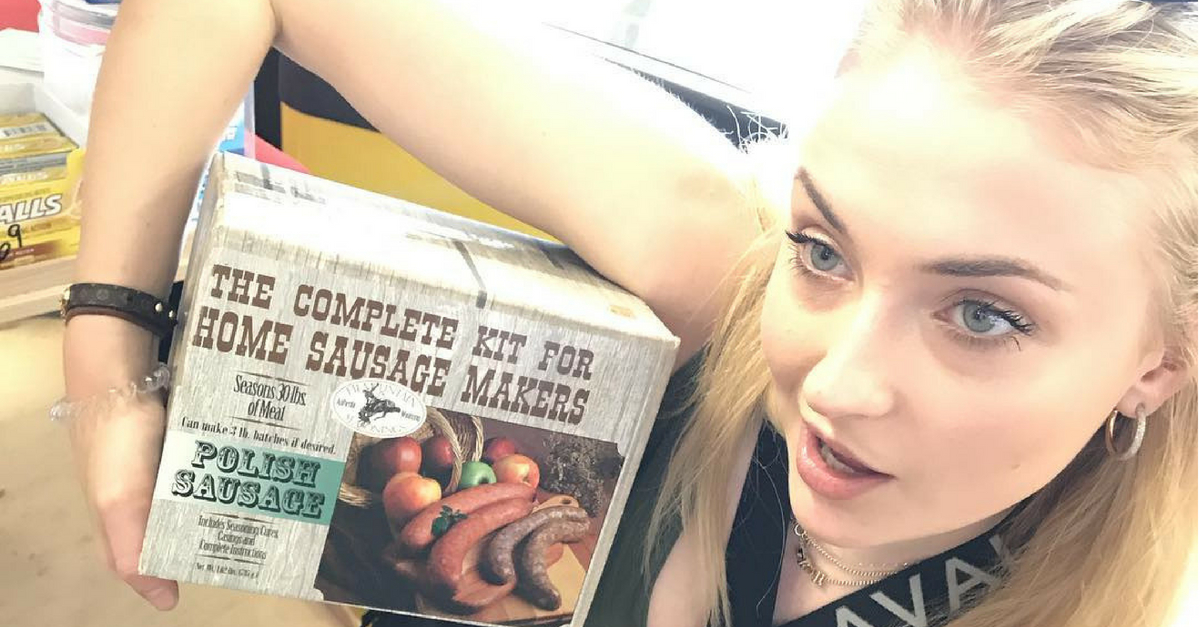 Yeah, me neither, but for Sophie Turner, that is a whole different story! HBO’s Game of Thrones star, who also stars in the X-men franchise, is widely known for portraying the powerful Sansa Stark, but did you know she is a secret Instagram food blogger? Yes, she has a “secret” Instagram account dedicated to sausages in real life!

Sad to see @interviewmag go. What an iconic magazine. And it’s been an honour to be in those pages and on the @interview_de cover. You’ll be missed

Hmm. Is this a thing now? Are Hollywood stars now getting into secret food Instagram’s? Just last year, Lorde confessed to her secret Instagram @onionringsworldwide, where she rated the onion rings she ate, given them a score of one to five each. Although she tried to keep her instagram private, fans discovered she was managing the account, and immediately shut it down. The star felt too much pressure and didn?t want the situation to get out of hand by it reading ?too relatable.?

Not for Turner, the 22-year-old actress still has her account open and is going for the long run. It’s safe to say she already has a job lined up for when the series ends next year! The wonders of social media.

#nofilter Disneyland, Los Angeles. Wild boar crepinette and Spanish cured sausage. More like pulled meat in texture. The taste itself is delicious, however… can I even call this a sausage? I think not. 2/10 Disneyland was fab tho 👍

A post shared by Passionate Bout The Saus (@sophiessausagereviews) on Apr 6, 2018 at 8:11pm PDT

The instagram account called [email protected]? shows off different sausages around the world, rating them from 1 to 10. The actress focuses on skin, taste, size and texture. How do we know she?s passionate about sausages? Well, her description on the account reads, ?Passionate Bout The Saus.? Good enough for me!

The first post was posted back in April 2018, and was rated as a 7/10, that Turner ate at London?s Heathrow Airport in England.

#nofilter London, England. A classic Cumberland. Juicy on the bite. Skin not too tough. Around the size of my middle finger: perfect. However I might have liked the skin to be a little crispier. For what it is….. Result: 7/10 🤟

The actress visited two spots, in Los Angeles. The first was in Melrose Avenue, where the actress gave it a 8/10 due to the perfect turkey to herb ratio. Later, that day the actress posted another sausage picture taken at Animal Restaurant, where she gave the sausage a low mark of 4/10, due to it being ?more bitty than expected.? The actress introduced the hashtag #sausagesurpriseoftheweek to draw in more followers.

#nofilter #sausagesurpriseoftheweek Los Angeles, California Sausage sauce on the sly. Sausage gravy on biscuit. Slightly spicy. More bitty than expected but the taste of the biscuit really complements this gravy. Without the biscuit who knows where we’d be. 4/10

A post shared by Passionate Bout The Saus (@sophiessausagereviews) on Apr 4, 2018 at 9:37pm PDT

As of now, the British actress has about 41,600 followers, with a few more reviews on the page, and even shared a photo of herself holding a sausage maker, proving it is indeed her Instagram. Judging by her rating skills, it?s clear she is a big fan of sausage and is quite knowledgeable in the area. We?re still waiting for that 10/10, but for now, if you?re close to the restaurants she?s reviewed, give them a try!

Read More: Maisie Williams just explained why she may not get roles after Game Of Thrones