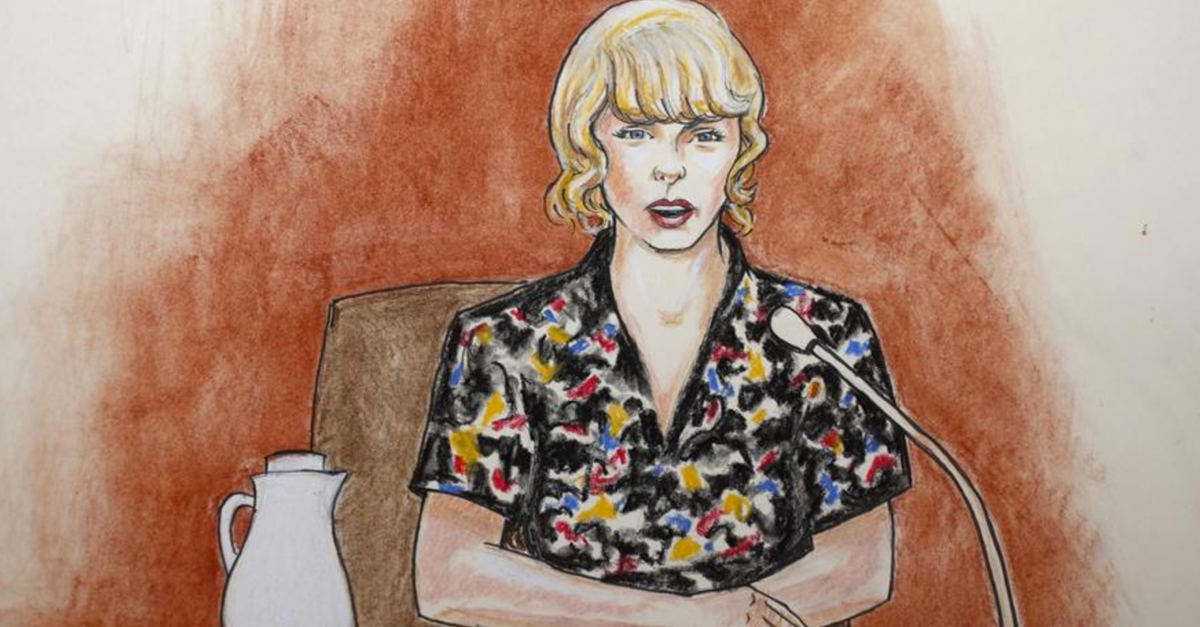 Four years after Taylor Swift said she was groped by a radio station DJ before a concert in Denver, the pop superstar told her story in sometimes unflinching language that did not sugarcoat what she called a “despicable and horrifying and shocking.”

Swift used the word “ass” dozens of times on the witness stand as she told jurors that David Mueller reached under her skirt during a meet-and-greet photo op in 2013.

“He stayed attached to my bare ass-cheek as I lurched away from him,” Swift testified in federal court Thursday during a trial over dueling lawsuits in the case.

“It was a definite grab. A very long grab,” she said at one point.

Mueller sued Swift after her team reported the alleged assault to his bosses at a country music station. He is seeking up to $3 million, saying the allegation cost him his job and reputation.

Swift countersued Mueller, claiming sexual assault. She is seeking a symbolic $1, saying she wants to serve as an example to other women who have been assaulted.

She got a laugh when she said her security guard, Greg Dent, saw Mueller “lift my skirt” but someone would have had to have been underneath her to see the actual groping — “and we didn’t have anyone positioned there.”

Swift was more serious when asked her reaction to Mueller being fired.

“I’m being blamed for the unfortunate events of his life that are a product of his decisions, not mine,” she told jurors.

“Do you think Mr. Mueller got what he deserved?” his attorney Gabriel McFarland asked.

“I don’t feel anything about Mr. Mueller. I don’t know him. … I think what he did was despicable and horrifying and shocking.”

Mueller, his hair white compared to his image from the photo op, stared at a table while the singer-songwriter testified. He denies groping Swift.

Swift testified that after the photo was taken at the meet-and-greet, she tried to get as far away Mueller as she could. She said she told him and his girlfriend, who was also in the photo, “thank you for coming” in a monotone voice before they left.

She also said she was stunned and did not say anything to Mueller or halt the event after he left because she did not want to disappoint several dozen people waiting in line for photos with her.

In the image, shown to jurors during opening statements but not publicly released, Mueller’s hand is behind Swift, just below her waist. Both are smiling.

Mueller has testified that the photo was “weird and awkward,” but he insisted that he touched Swift on the ribs, not on the rear.

Thursday’s final witness was Stephanie Simbeck, a photographer who works for Swift and took the picture of her and Mueller.

Simbeck said she knew something was wrong as she shot the photo. She testified that Swift later told her what happened, looked at a photo and pointed out Mueller as the person responsible.

Earlier, Hershel Coomer, a supervisor at the country music station where Mueller worked, took the witness stand and denied a claim by Mueller that Coomer had said he groped Swift at an event for radio directors.

Coomer said he first heard about the claim two years after Mueller was fired from KYGO. Coomer called it a lie.

Testimony is scheduled to resume Friday.