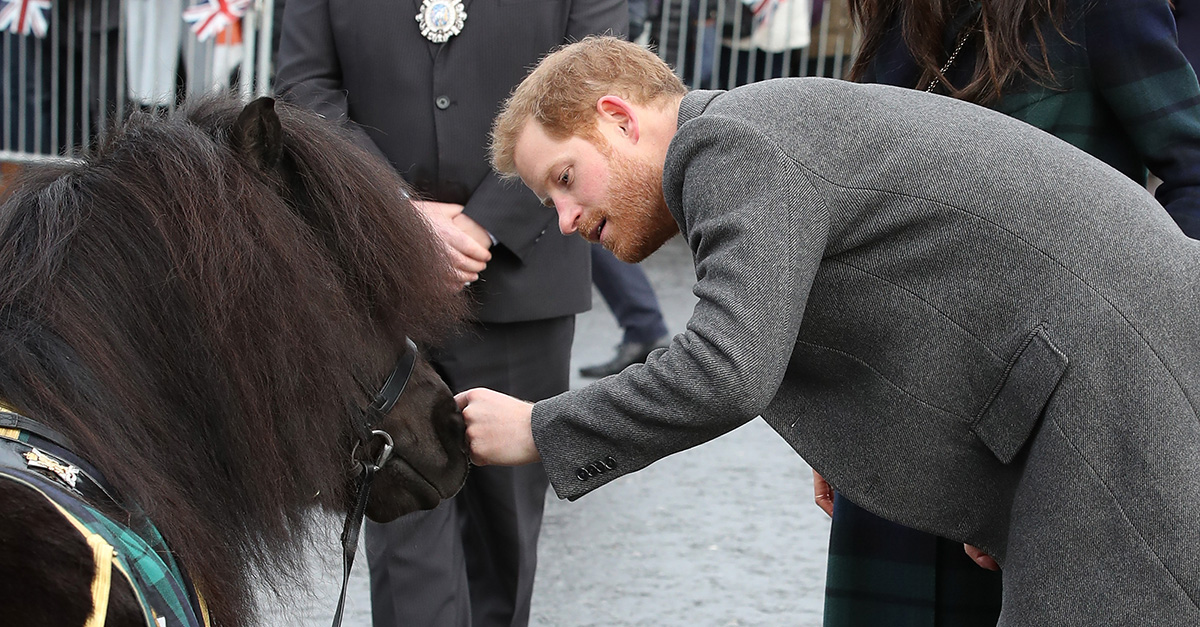 A cheeky little pony nearly took off one of Prince Harry’s fingers during his official visit to Scotland on Feb. 13.

The soon-to-be groom appeared with his fiancée Meghan Markle by his side to greet fans outside of Edinburgh Castle on Tuesday before visiting Social Bite, a new social cafe which helps support the homeless in Edinburgh.

“Prince Harry and Ms. Markle hear more from staff about their experiences, and how @SocialBite_ has helped them to overcome homelessness,” Kensington Palace wrote on Twitter. Social Bite runs throughout the country and even employees several people who have been homeless themselves.

Prince Harry and Ms. Markle hear more from staff about their experiences, and how @SocialBite_ has helped them to overcome homelessness. pic.twitter.com/SUzvESxdqS

Kensington Palace documented the couple’s day which including observing the firing of the One O’clock Gun and attending a reception the Palace of Holyroodhouse to celebrate Scotland’s Year of Young People 2018.

Inside the Castle, Prince Harry and Ms. Markle observe the firing of the One O'clock Gun, a tradition which dates back to 1861 marking time for ships in the Firth of Forth. pic.twitter.com/JhtZC6ZIxU

The Year of Young People aims to help the youth by celebrating their achievements and creating new opportunities for them to have a voice in various social issues.

RELATED: Prince Harry and Meghan Markle?s guest list is filling up ? will his low-profile stepsister make the cut?

Prince Harry and Ms. Markle meet guests at a reception to mark Scotland's Year of Young People 2018 at the Palace of Holyroodhouse. pic.twitter.com/3GNTkQ8Kwm

While the couple seemed to receive a warm welcome from the people of Scotland, someone was less than impressed to meet Prince Harry. A seemingly sweet Shetland pony named Cruachan nearly sunk his teeth into Harry when the two met at Edinburgh Castle. Harry recently took over as Captain General of the Royal Marines when his grandfather Prince Philip resigned from royal duties last year, but Cruachan, who serves as the Royal Marines’ mascot, decided to greet his superior by nearly taking his hand off!

Prince Harry and Ms. Markle are greeted on arrival at Edinburgh Castle by the Band of the Royal Marines and the mascot of The Royal Regiment of Scotland, Shetland pony Cruachan🐴 pic.twitter.com/3nzR9W6ZP5

It’s a good thing that Harry had fast reflexes, otherwise he might have been missing a finger to put a ring on at the royal wedding on May 19!