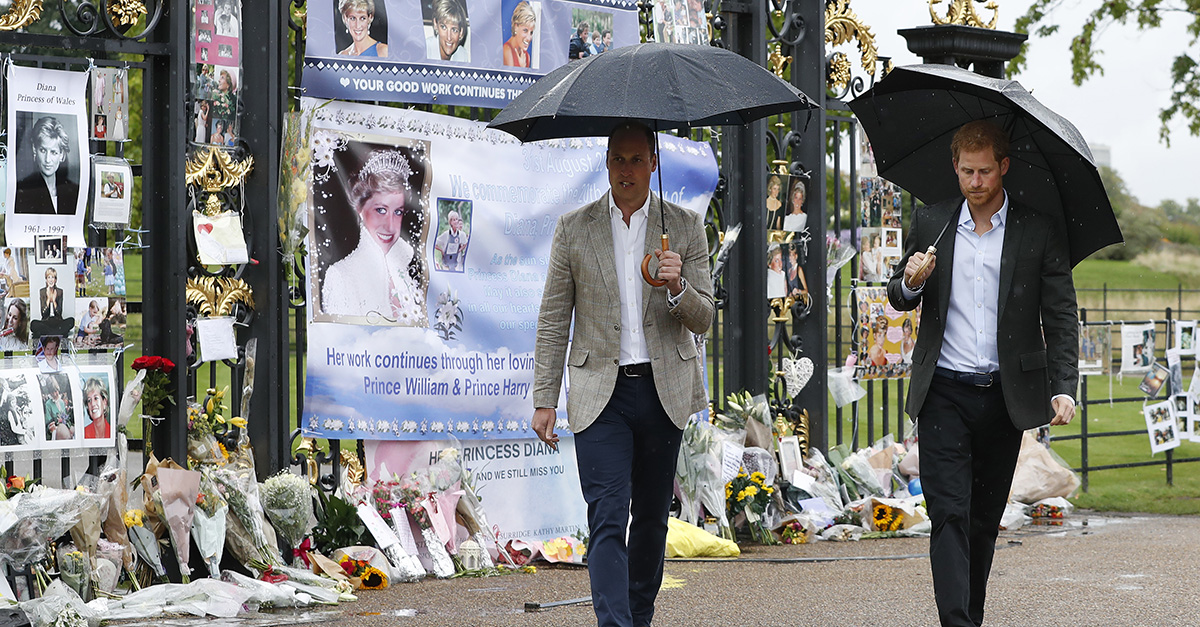 Photo by Kirsty Wigglesworth- WPA Pool/Getty Images
LONDON, ENGLAND - AUGUST 30: Prince William, Duke of Cambridge, left, and Prince Harry walk away after placing flowers amongst the floral and pictorial tributes to their late mother Princess Diana The garden has been transformed into a White Garden dedicated in the memory of Princess Diana, mother of The Duke of Cambridge and Prince Harry. (Photo by Kirsty Wigglesworth- WPA Pool/Getty Images)

Prince William and Prince Harry gathered with several of the charities Princess Diana was a patron of ahead of the 20th anniversary of her death on Wednesday.

Aug. 31 marks the 20th anniversary since Princess Diana died tragically in a car accident in Paris, France and in honor of her legacy, her sons hosted many of her favorite charities including Centerpoint, GOSH,  The Leprosy Mission, National AIDS Trust, The Royal Marsden and The English National Ballet.

The Duke and Duchess of Cambridge and Prince Harry arrive and make their way to The White Garden. pic.twitter.com/MtaJitNLtl

The Duke of Cambridge, his wife, Duchess Catherine, and Prince Harry hosted the organizations as they walked the White Garden on a gloomy day in London. The royals also met with gardener Sean Harkin, who designed the display, and Graham Dillamore, who knew Princess Diana 30 years ago.

RELATED: How Elton John played through Diana?s death ? with a little help from Richard Branson

The garden was created to “create peaceful and contemplative spaces where visitors can reflect.”

TRH meet with Gardener Sean Harkin who designed the display, and Graham Dillamore who knew The Princess from working here over 30 years ago. pic.twitter.com/LPA9fUWp6i

White Gardens follow a tradition first established at Sissinghurst, to create peaceful and contemplative spaces where visitors can reflect. pic.twitter.com/ZfiJzOL4co

After the tour of the garden, Prince William and Prince Harry walked along the gates of Kensington Palace and viewed some of the tributes mourners left for their late mother.

TRH meet representatives from the charities who had The Princess as Patron, to hear about the impact of her work. pic.twitter.com/xjt8MyATZj

“The Duke and Prince Harry are grateful for the many flowers, letters and messages they have received about their Mother,” Kensington Palace wrote on Twitter on their behalf.

The Duke and Prince Harry are grateful for the many flowers, letters and messages they have received about their Mother. pic.twitter.com/pOAtvsOE4q