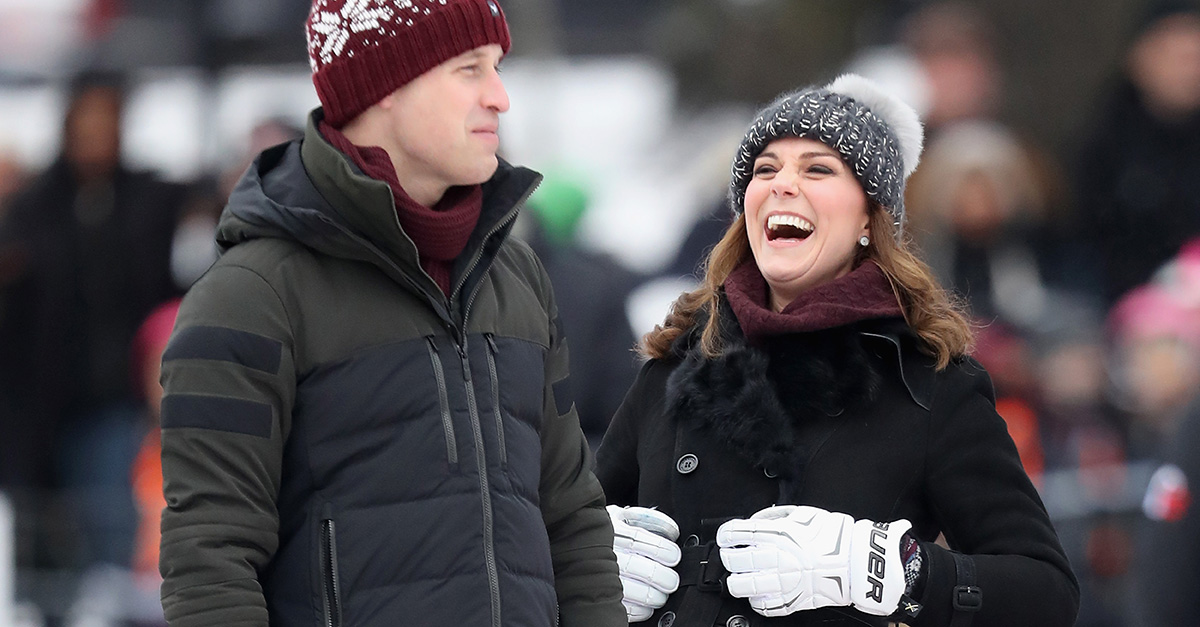 Photo by Chris Jackson/Getty Images
STOCKHOLM, SWEDEN - JANUARY 30: Prince William, Duke of Cambridge and Catherine, Duchess of Cambridge laugh as they attend a Bandy hockey match where they will learn more about the popularity of the sport during day one of their Royal visit to Sweden and Norway on January 30, 2018 in Stockholm, Sweden. (Photo by Chris Jackson/Getty Images)

Duchess Catherine braved the ice in her third trimester of pregnancy when she challenged her husband to a hockey shootout on their first few days of their four-day tour in Sweden.

The royal couple kicked off their tour in Stockholm on Tuesday and tried their hand at one of the country’s most popular sport, bandy hockey.

The Palace shared the Duchess’s goal on Twitter Tuesday.

“The Duchess takes a shot at goal!

William also tried his hand at the sport, and the couple later shared hot chocolate with some of the city’s local children.

“Thank you to everyone for making The Duke and Duchess’s first engagement in Stockholm such a memorable one! #RoyalVisitSweden,” Kensington Palace wrote.

RELATED: Duchess Catherine made good use of her hair after chopping off 7 inches of her gorgeous locks

Thank you to everyone for making The Duke and Duchess's first engagement in Stockholm such a memorable one! #RoyalVisitSweden pic.twitter.com/Qd0wZB5I0A

While on the ice, the couple took a few sips from the traditional “bandy briefcase,” a flask that typically contains warm wine or spiked coffee, but William and Kate sipped on alcohol-free ripple, according to PEOPLE.

William and Kate sip from a drink brought them in the traditional Bandy briefcase pic.twitter.com/FxN3v9CKGK

Bandy hockey will now be played in the upcoming Winter Olympics and only differs from regular hockey in its players’ use of a special curved stick and a ball instead of a puck.

Following the fun on the ice, the royal couple joined King Carl KVI Gustaf, Queen Silvia, Crown Princess Victoria and Prince Daniel for lunch at the Royal Palace of Stockholm.

The Duke and Duchess are with The King and Queen of Sweden, and Crown Princess Victoria and Prince Daniel at the Royal Palace of Stockholm #RoyalVisitSweden pic.twitter.com/kcEazx1Jc0

William and Kate kicked off their official tour on Monday evening after taking their children Prince George and Princess Charlotte to school in the morning. From Sweden, the couple will move to on to Norway to wrap up the tour. William will fly solo at one event in Norway so that the pregnant Duchess can rest.