Prince Harry and Meghan Markle’s wedding cake is going to be bananas — literally! 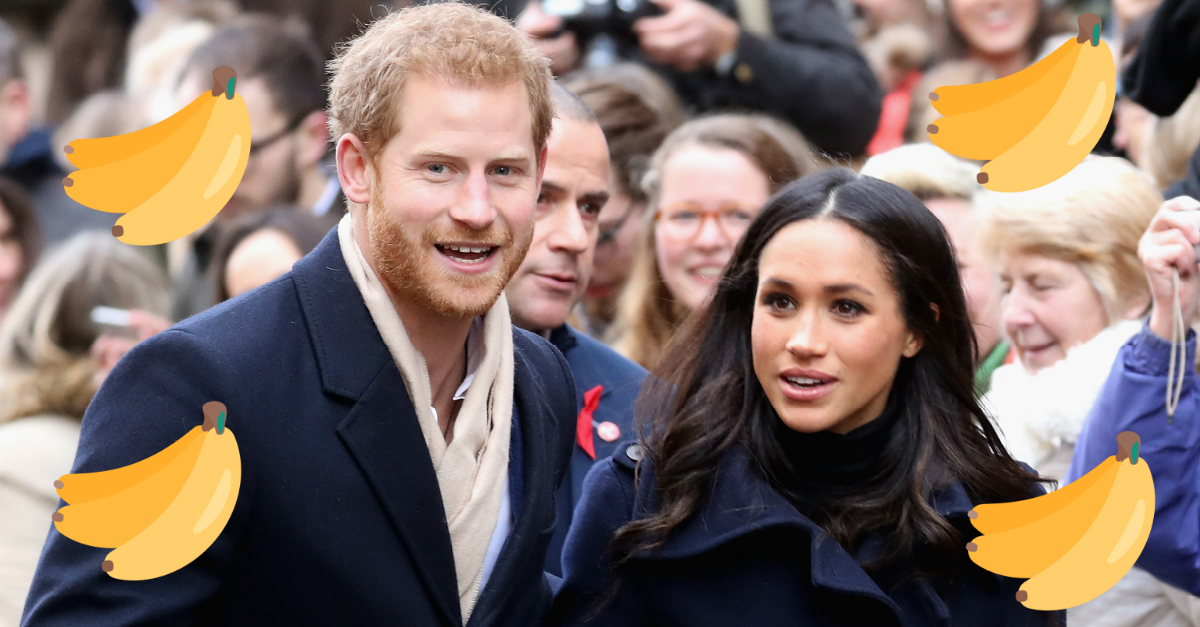 Newly-engaged Prince Harry and Meghan Markle have chosen their wedding cake, and it’s going to be quite a-peel-ing!

The couple — who’s engagement was confirmed last week — have apparently requested a wedding cake made from bananas, according to a report in the UK’s Telegraph newspaper.

“This will be the first royal wedding cake made from bananas,” a source close to the couple told The Telegraph.

“A traditional wedding cake is a rich fruit cake, like a Christmas cake, where all the cake is soaked in alcohol first,” award-winning wedding cake designer Rosalind Miller told the paper.

“But with Meghan being American, they are more used to having sponge cakes,” she continued. “We find that in actual fact, most couples that come to us also want sponge cakes these days. The traditional rich fruit cake is not very popular now.”

The paper also reports that one of the Prince’s former royal chefs, Darren McGrady, has spoken before about Harry loves “anything with banana.”

It would appear that Harry isn’t the only one who’s fond of bananas. Back in October of 2016, not long after her relationship with Harry was confirmed, Markle shared a cute image featuring a pair of cuddling bananas on Instagram.

The couple announced their engagement to the world on Nov. 27 with a statement from Kensington Palace on behalf of Prince Harry.

“His Royal Highness and Ms. Markle became engaged in London earlier this month. Prince Harry has informed Her Majesty, The Queen and other close members of his family. Prince Harry has also sought and received the blessing of Ms. Markle’s parents. The couple will live in Nottingham Cottage at Kensington Palace,” the statement read in part.

A day later, the announcement was made that Markle and Harry are planning for a May 2018 wedding at St. George’s Chapel at Windsor Castle.

“The marriage of His Royal Highness Prince Henry of Wales and Ms. Meghan Markle will take place at St. George’s Chapel, Windsor Castle in May, 2018,” the statement on Kensington Palace’s official Twitter read on Tuesday. “Her Majesty The Queen has granted permission for the wedding to take place at the Chapel.”

“The Royal Family will pay for the wedding,” the statement added. “Further details about the wedding will be announced in due course.”

The marriage of Prince Harry and Ms. Meghan Markle will take place at St. George's Chapel, Windsor Castle in May 2018. pic.twitter.com/lJdtWnbdpB