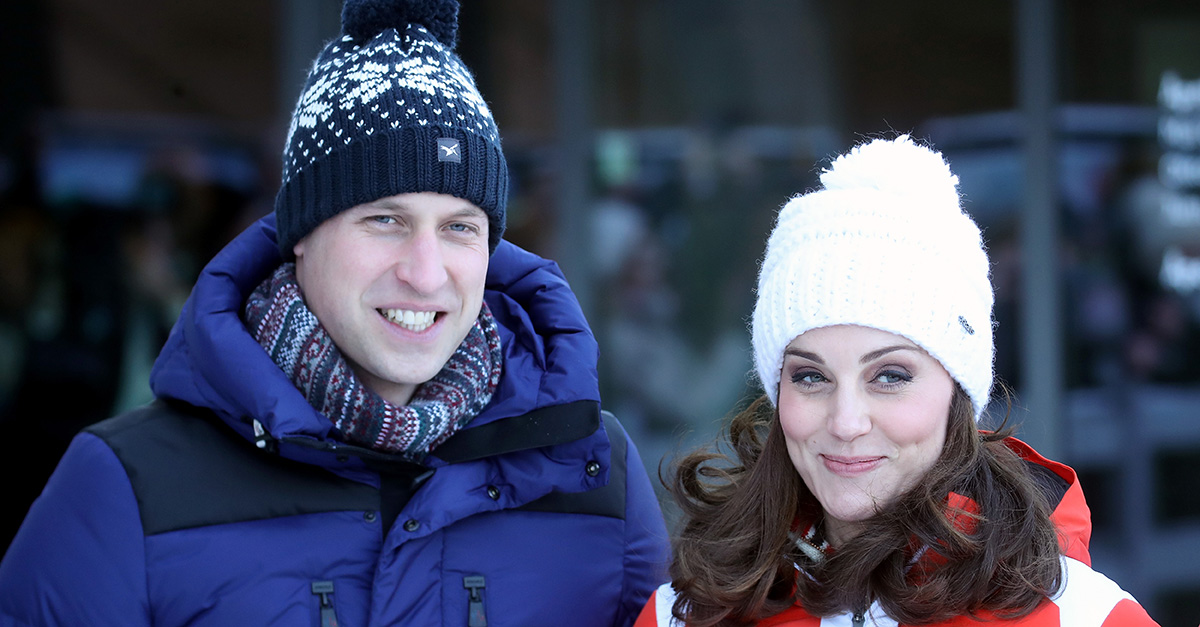 Photo by Chris Jackson/Getty Images
OSLO, NORWAY - FEBRUARY 02: Prince William, Duke of Cambridge and Catherine, Duchess of Cambridge arrive at Holmenkollen ski jump, where they will take a short tour of the museum before ascending to the top of ski jump to talk with and observe junior ski jumpers from Norways national team on day 4 of their visit to Sweden and Norway on February 2, 2018 in Oslo, Norway. (Photo by Chris Jackson/Getty Images)

Prince William and Duchess Catherine are wrapping up their four-day tour of Sweden and Norway but before they said goodbye, they stepped out one more time on Friday for a little snowy weather outing.

On Friday morning, the Duke and Duchess of Cambridge braved the wintery weather to learn more about the wildly popular Norwegian teen drama “Skam” and rubbed elbows with some of the stars. The couple was joined by Prince Haakon and Princess Mertens-Marit on the visit to Hartvig Nissen School where the series was filmed. The drama revolved around a group of high school students and focused on teen issues like eating disorders, relationship issues, sexual assault and homosexuality. It wrapped after it’s fourth season.

The final day of The Duke and Duchess's tour begins at the Hartvig Nissen School, which was the location for the hugely successful Norwegian television programme Skam #RoyalVisitNorway pic.twitter.com/lta3RVnHUZ

William took part in some of the conversations with students at the school and the actors and asked them, “Does it feel that a lot of young people are afraid of the issues, and what you’ve done is brought it to life?”

Actor Taregi Sandvik Moe, whose character was homosexual and had a mother who suffered from mental illness responded, “The issues are hard for people to take. We live in a society where people expect you to deal with problems on your own,” according to PEOPLE.

Kensington Palace captured the royals’ final day of the tour and shared it on Twitter.

The Duke and Duchess, accompanied by The Crown Prince and Princess of Norway, meet the stars of Skam to hear more about the making of the series 🎥 #RoyalVisitNorway pic.twitter.com/nnu0YG8ZmC

Later, the couple joined Crown Prince Haakon, Princess Mette-Marit at their home for lunch followed by a tour of Holmenkollen Ski Jump, an iconic landmark in the city of Oslo.

RELATED:  Nothing is cuter than pregnant Duchess Catherine challenging Prince William to a shootout on the ice

The final engagements of the tour will take place in the beautiful setting of Holmenkollen, the snowy hills that overlook the city of Oslo ❄️#RoyalVisitNorway pic.twitter.com/x97ts5kNcT

The Duke and Duchess, accompanied by The Crown Prince and Princess, arrive at the Holmenkollen Ski Jump – one of Oslo's most iconic landmarks 🇳🇴#RoyalVisitNorway pic.twitter.com/4h9z73XY96

While visiting the ski jump, William and Catherine learned more about how Norwegians deal with the coldest temperatures while maintaining a healthy lifestyle. They were also able to observe junior ski jumpers practice from Norway’s national team.