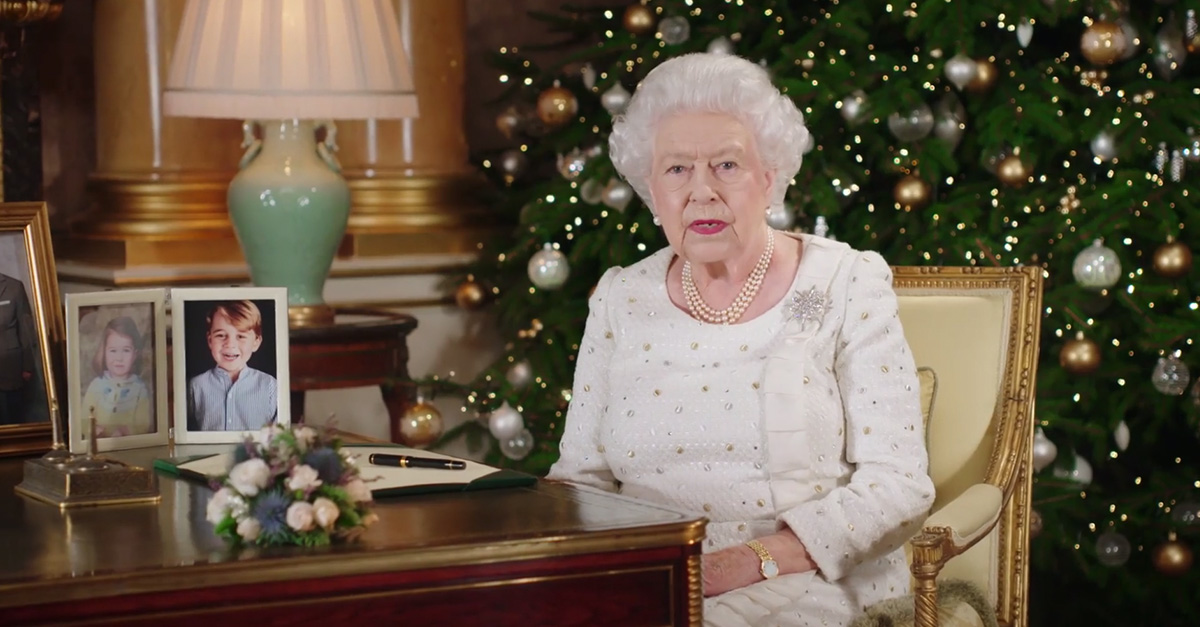 The Queen of England Elizabeth II gave her traditional annual Christmas address Monday touching on the fact that many were likely viewing from their smart phones and computer devices, rather than just their television screens as first done sixty years ago.

The video started with a children’s choir singing “God Save the Queen,” before the queen appeared to share her message.

"We think of our homes as places of warmth, familiarity and love… there is a timeless simplicity to the pull of home."Watch Her Majesty The Queen's Christmas Broadcast 2017. Merry Christmas to all. #ChristmasDay2017

Her message also largely touched on the extremist attacks that have touched England throughout the past year, including against Manchester and London.

In this year's Queen's Christmas Broadcast 2017, Her Majesty has talked about the theme of "home" and wished everyone a very happy Christmas. You can watch the full speech on our website – by following the link in our bio. "We think of our homes as places of warmth, familiarity and love; of shared stories and memories, which is perhaps why at this time of year so many return to where they grew up," Her Majesty said. "There is a timeless simplicity to the pull of home. "For many, the idea of “home” reaches beyond a physical building – to a home town or city.  This Christmas, I think of London and Manchester, whose powerful identities shone through over the past twelve months in the face of appalling attacks," The Queen said. The Queen also added… "Today we celebrate Christmas, which itself is sometimes described as a festival of the home.  Families travel long distances to be together. "Volunteers and charities, as well as many churches, arrange meals for the homeless and those who would otherwise be alone on Christmas Day.  We remember the birth of Jesus Christ whose only sanctuary was a stable in Bethlehem.  He knew rejection, hardship and persecution; and yet it is Jesus Christ’s generous love and example which has inspired me through good times and bad. "Whatever your own experiences this year; wherever and however you are watching,  I wish you a peaceful and very happy Christmas." #Christmas2017 #ChristmasDay2017 #QueensSpeech

She hailed the “powerful identities” of Manchester and London, many of whom she met and visited with after the attacks.

The queen, her husband Prince Philip and family members attended a church service Monday near Elizabeth’s country estate in Sandringham. They mingled with locals who come to watch them arrive.

A line stretching all the way down the road in Sandringham, people tell us it is massive turnout today to see the royals especially Harry and Meghan #harryandmeghan #merrycrimbo #Sandringham pic.twitter.com/dk9Zx5DMRp

The royal family had a private lunch scheduled afterward. This is the first Christmas the family will be joined by Prince Harry’s fiancee, American actress Meghan Markle.

RELATED: After his big engagement news, Prince Harry steps out by himself for the Sovereign’s Parade

Merry Christmas 2017! 🎄 Today The Queen and members of The Royal Family attended a Christmas service at Sandringham Church in Norfolk. #ChristmasDay2017

Elizabeth and Philip missed last year’s service with the flu.