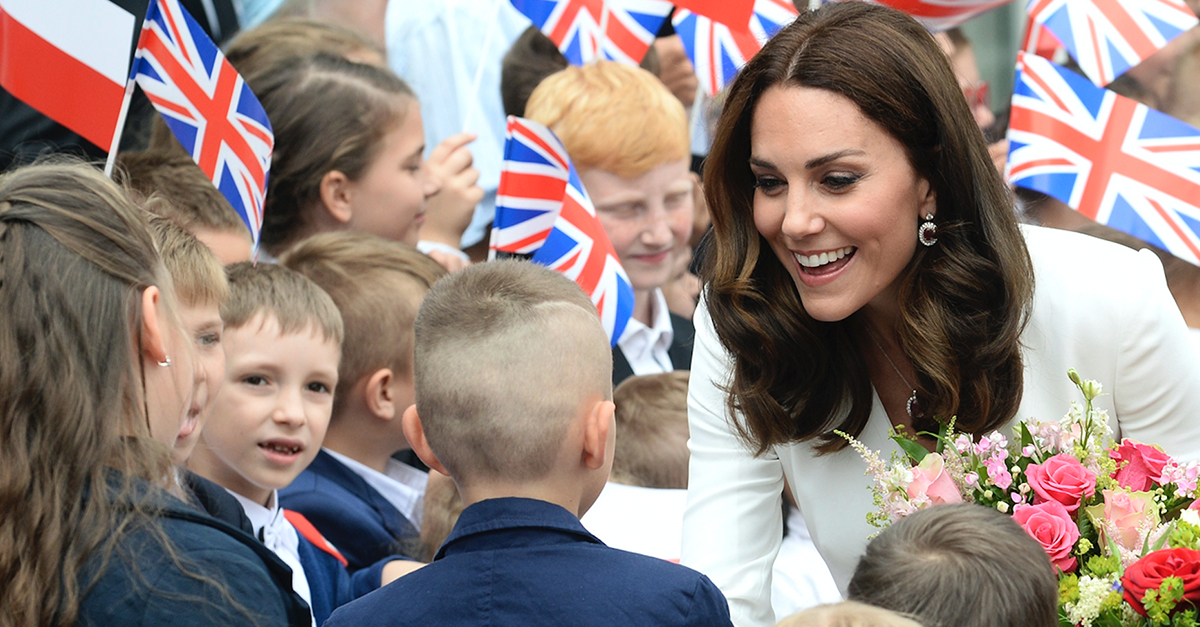 AP Photo/Alik Keplicz
Children welcome Britain's Kate, the Duchess of Cambridge, during her visit with Britain's Prince William, in front of the presidential palace, in Warsaw, Poland, Monday, July 17, 2017. The Duke and Duchess of Cambridge and their children arrived in Poland on Monday, on the first leg of a goodwill trip to two European Union nations that seeks to underscore Britain's friendly ties despite its negotiations to leave the bloc. (AP Photo/Alik Keplicz)

The Duke and Duchess of Cambridge shook hands with the crowd and signed autographs in Poland on Monday at the start of a two-country goodwill trip that is intended to underscore Britain’s friendly ties with the European Union that it is in the process of leaving.

After arriving at Warsaw’s airport, they were driven in a motorcade to meet President Andrzej Duda and First Lady Agata Kornhauser-Duda at the Presidential Palace for lunch. They visited the palace gardens. After lunch, the royal couple were greeted by a huge crowd waving British and Polish flags and taking photos, as they took a brief walk in front of the palace.

According to the Polish hosts, the schedule of this “respect and friendship” tour includes a visit to the 1944 Warsaw Uprising Museum, where the pair will mix with World War II veterans. They will then have a meeting with representatives from Polish and British business.

In the evening, Prince William is to deliver a speech during a reception in the historic Lazienki Park in honor of his grandmother, Queen Elizabeth II.

On their first official visit to Poland, the couple were accompanied by their children, Prince George, who will be 4 on Saturday, and Princess Charlotte, 2. The children are expected to draw wide attention on a trip being characterized by the British press as part of a charm offensive to soften Britain’s Brexit diplomacy. Warsaw’s Belvedere Palace, where they are residing during the visit, has had playground toys installed.

On arrival, the Duchess was wearing an Alexander McQueen white skirt and jacket and carrying Princess Charlotte, who was dressed in a pink flowered sleeveless dress. Prince William was wearing a dark suit, and Prince George was in short trousers and a shirt.

On Tuesday, the royals will travel to the Baltic coast city of Gdansk, where they will visit a replica of Shakespeare’s theater and meet the former president, Lech Walesa, who was instrumental in bringing about the end of communism in Poland. On Wednesday, they head to Berlin.